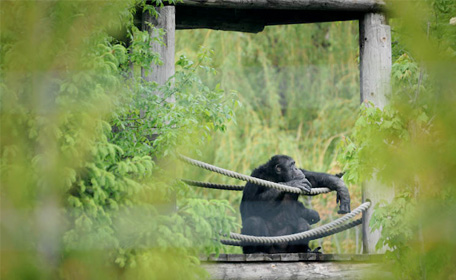 When The Chimps of Fauna Sanctuary: A True Story of Resilience and Recovery (Houghton Mifflin Harcourt, 2011) by Andrew Westoll first hit our radar a few months ago, we could think of no one more perfect to review it than activist Karol Orzechowski. Snagging Karol for this review was a tall order. We knew he was busy working on post-production for his film, Maximum Tolerated Dose (don’t miss our interview with him, which will surely inspire you) — a full-length feature documentary that focuses on animal experimentation, told from the perspective of “both humans and non-humans who have experienced animal testing first-hand.” Despite his demanding schedule, Karol agreed to give us his unique perspective on The Chimps of Fauna Sanctuary — unique because he has spent time with some of the rescued animal ambassadors who are residents to Fauna, and, as is evidenced by his film, the topic of this book — the plight of animals who have been subjected to experimentation — is part of Karol’s heartbeat. The result is one of our favorite reviews to ever run on Our Hen House.

REVIEW: “The Chimps of Fauna Sanctuary” by Andrew Westoll

It’s difficult for me to review The Chimps of Fauna Sanctuary with any sort of critical distance. I know the author, Andrew Westoll, and consider him a friend and colleague. I am also lucky enough to know some of the actual chimps of  Fauna Sanctuary, and have spent time there learning about their stories, and looking into their eyes. Furthermore, I have a great emotional investment in sharing intimate stories about survivors of animal experimentation with a broader audience. In fact, it’s the subject of the film project I am deep into editing, Maximum Tolerated Dose. In other words, I should just come right out and say from the get go: 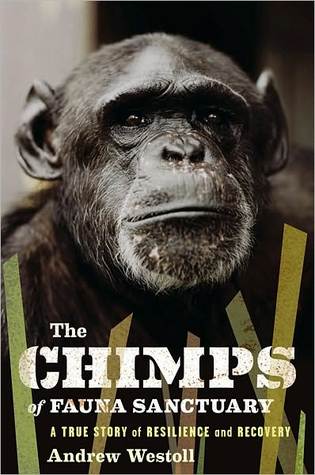 “The Chimps of Fauna Sanctuary” by Andrew Westoll

I really, really want you to read this book. (Others agree: The Chimps of Fauna Sanctuary recently won the Charles Taylor Prize, Canada’s most prestigious award for literary non-fiction.)

Behind that immediate desire, though, is something else. The truth is, I really don’t just want you to read the The Chimps of Fauna Sanctuary. We have all read books that touched us deeply, but whose lessons and emotional impacts elude us even just days after finishing. So, after you read The Chimps, I want you to remember it. Let it stick with you. Make these stories into memories that you draw upon regularly.

Throughout The Chimps of Fauna Sanctuary’s 260 pages, we are presented with a sharp and poignant exploration of the creation of Fauna Foundation, the building of a sanctuary, and the lives of the residents who come to call it home. Westoll does an excellent job of laying out the emotional history of this haven, and of the long and difficult road from when the sanctuary was simply an idea, to the actual building of it.

We are let into the world of Gloria Grow – the sanctuary’s founder, and the quiet but fierce “mama bear” of the whole operation. She is the most compelling human character, and her steely resolve and determination to build her sanctuary in one of the most unlikely places – a small village just outside of Montreal – sets the tone for a lot of how the book plays out. As Westoll describes it, Grow navigates the complexities of establishing a home for the former lab chimps with grace and sheer willpower; with care and forethought she likewise navigates the complexities of becoming the subject of a book. She is a reluctant and cautious spokesperson, not because she feels it isn’t important to speak up, but because exploitation has haunted the chimps’ lives, and allowing someone close enough to tell their stories is a risky proposition. But Grow rises to the task, and lets Westoll into their lives, tentatively and slowly.

The Chimps of Fauna Sanctuary is, in many ways, a book about how working at Fauna as a volunteer changed Westoll’s life. He indulges his personal narrative, tastefully and sparingly, allowing readers to take the journey with him rather than just being spectators. Only when it helps the narrative does he let you into his inner world – getting to know the chimps, and pondering his relationship to them, and their relationship to each other, asking himself what it all means… It is a delicate balance to strike, but Westoll succeeds.

Of course, the main characters of the book are the chimps themselves – 13 survivors who spent years, even decades, enduring the isolation, pain, and psychological distress of biomedical experimentation. In labs such as the now defunct LEMSIP, they endured hundreds of terrifying knockdowns (tranquilizations done with dart guns), repeated invasive surgeries, separation from meaningful social groups, and years of emotionally damaging boredom. This is where it becomes very difficult for me to keep any sense of objectivity. Being someone who has been very outspoken against all animal experimentation, my visits to Fauna have been very emotional, touching me in a deep and dark place. The stories of Tommie, Rachel, Chance, Spock, Binky, Pepper, Sue Ellen, Regis, Toby, Petra, Jethro, Yoko, and Maya are beyond heartbreaking, and their perseverance in the context of their new life is heavy with past trauma.

As an example, one of the chimps that I’ve been able to follow closely during my visits to Fauna is Pepper. Pepper was born into a mess: She spent her first 7 years of life at a Buckshire Corporation lab, until she became too big to control, and was subsequently sent to LEMSIP. Pepper spent the next two decades there, used as a breeding mother at first, and then a research subject. She endured over 300 knockdowns and dozens of biopsies on various parts of her body. After being used for biomedical research for 27 years, she was handed over to Fauna, and has since lived her life quietly and calmly. These days, Pepper is a nervous soul who has seen the depths of what humans are capable of doing, but she also has a big heart and has healed so much, finding solace in her companionship with her chimp friend, Sue Ellen, and some of the Fauna caretakers. She builds beautiful blanket nests every night, and spends her days grooming and exploring the sanctuary grounds.

Fauna Sanctuary is not open to the public. I have been allowed in occasionally to help the sanctuary with documentation, and every visit has been a privilege for which I will always be thankful. For those people who are not so lucky as me, Westoll’s book manages to communicate the transformative power of the place, and the weight that comes with simply being in the presence of such strong, stoic, and damaged individuals.

Apart from the access to these individuals – access that Westoll, too, was privileged to have received, and sufficiently skilled to share with the rest of us in a deeply authentic way – perhaps the strength of The Chimps of Fauna Sanctuary is the considerable amount of research that he did to elaborate on the chimps’ stories, and the history of Fauna Foundation. The book is infused with background details about the various places that the chimps came from, the people and institutions involved in their exploitation, and the ways in which so many people wrung their hands about the animals’ plight over the years, but rarely did anything to end it. This context is crucial to understand the chimps in the present tense, and also helps to bring the Fauna Foundation to life, in terms of the work it does and the struggles it faces.

One question that might arise for readers approaching the book from an animal rights point of view is whether the focus on chimpanzees implies that only chimps are exceptional non-humans who should be exempt from experimentation. In fact, Westoll mostly avoids a larger discussion of the ethics of biomedical research, and instead focuses on the fallout that it has had for chimps – both in general, and Fauna’s chimps in particular. The Chimps of Fauna Sanctuary was never meant to be an animal rights manifesto (and I think judging it on such criteria would miss the point). However, I imagine that many “non-AR” readers will actually find themselves pondering the larger implications of the ethics of experimentation. While Westoll and I disagree – and often agree to disagree – on some matters related to animal ethics, we certainly agree that individuals, and their stories, have the power to touch people deeply, and for those who are open to it, promote a change in consciousness and cross-species compassion.

What Andrew Westoll has done with The Chimps of Fauna Sanctuary is provide the reader with the in-depth stories of 13 individuals who have seen more hell in their lives than any sentient being should have to experience, and he has accomplished this retelling in a way that is both accessible and perfectly crafted for a mainstream audience unfamiliar with the issues.

Please also consider buying The Chimps of Fauna Sanctuary from your local independent bookstore, and visit the Fauna Foundation website to find out how you can support the people who support the chimps every day. 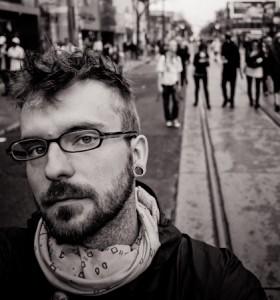 Karol Orzechowski is a filmmaker from Toronto, Ontario, Canada. His forthcoming documentary, Maximum Tolerated Dose (MTD), is about humans and non-humans who have experienced the vivisection industry first-hand. When he’s not working on films, Karol enjoys cycling, making music, reading, plotting, and scheming. You can find out more about MTD at MaximumToleratedDose.org.

Episode 121: “I belong to no party and am militant for no one. All my causes, including the most radical, are motivated by the defense of animals.”