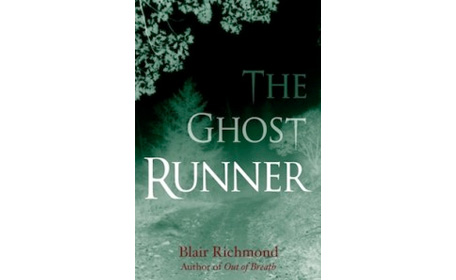 Review by Piper Hoffman
Kat Healy is back in The Ghost Runner (Ashland Creek Press, 2012), the second installment of Blair Richmond’s young adult trilogy about vampires, vegans, and saving the environment. Poor Kat’s life is still one of drama, mystery, and near-death encounters, but she makes the best of it and sticks to her principles, while the reader tags along for a great ride. 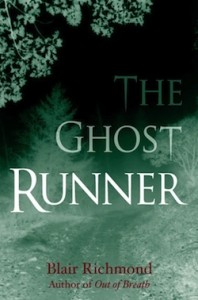 Since we first met Kat in Out of Breath, she has settled into life in the small town of Lithia, juggling a job at a running shoe store, a college course, and the lead in a Shakespeare play. Though Kat is still haunted by the early and violent deaths of her mother and a dear friend, she works to focus on the here and now – which includes adding a third love interest to the two she collected in book one. On the plus side, Mr. Number Three is human, as opposed to the two gentlemen that the mortal Kat entangled in book one, who are both vampires.
At the local college, Kat takes a class on environmentalism, which gives her the welcome opportunity “to write about being a vegan.” Of course, Kat finds it depressing to “write about factory farms and how they pollute the air and water,” but her professor instructs his students to “always look for the upside,” and “if you can’t find an upside, be the upside.”
Kat finds her opportunity to be the upside when she lands in the middle of a battle between local conservationists and a developer who wants to mow down a forest to build new houses. The developer, Ed Jacobs, has already begun hacking away ancient trees from acres of forest “where bears and deer and gray foxes used to roam.”
If he can prevail over the environmentalists and continue his construction/destruction, Jacobs could resume uprooting trees by the acre. Kat describes the consequences in heartbreaking detail:

Nature’s residents will be forced to move farther into the forest. The birds that had nests in those trees may lose their chicks, not to mention their homes. And the wild creatures that normally wander among the trees every day — the deer, rabbits, foxes, the occasional bears and mountain lions — will meet high fences intended to keep them out. Or, worse, the fences will be low, and the residents will put out poison or turn their dogs on them. The animals, natives here all along, will now so quickly be viewed as foreigners.

But nature may not be powerless against this attack.
Richmond also plays with the notion that climate change is a form of revenge that the earth, or Gaia, is taking on humanity for our destructive, polluting ways. Kat’s professor proposes this theory, and posits that activists who work for the environment are also part of Gaia – though he cautions that people “do not control nature,” and that “knowing this is the highest form of respect one can give.”
Perhaps he believes that the ghosts of dead miners are Gaia too — after all, when they show up in the forest, their weapon of choice for trying (and failing) to kill Kat is a tree. It isn’t clear whether these ghosts, the spirits of men killed in a mine collapse, side with the environmentalists or the developer, but it is clear why the vampires stay away from them, what with their pickaxes and homicidal tendencies.
The ghosts’ intentions pale in comparison to the malicious machinations of the people aligned against Kat and the other champions of the forest. The question of who will prevail in this battle of good against evil, of humility against greed, is the most pressing of several cliffhangers that will keep readers eagerly awaiting the third and final volume in Richmond’s compelling trilogy.
***
The Ghost Runner by Blair Richmond will be available next month. In the meantime, download a PDF excerpt. .

Episode 143: “The question is not if we will be extremists, but what kind of extremists we will be. The nation and the world are in dire need of creative extremists.”