Book Review: “The Lucky Ones: My Passionate Fight for Farm Animals” by Jenny Brown

Listen up, readers. You don’t want to miss this review, written by OHH reviewer extraordinaire Katie Gillespie. Katie gives us her take on Woodstock Farm Animal Sanctuary director Jenny Brown’s new book, The Lucky Ones: My Passionate Fight for Farm Animals. Since you will officially fall in love with Jenny after hearing her story (if you’re not already in love with her), you will absolutely need to mark your calendar for this Saturday’s podcast, Episode 141. Jenny, who joined us once before on our podcast (in one of our favorite interviews), brings passion to a new level in her upcoming appearance. She will talk about the process of writing this book with Gretchen Primack (whom we have featured in our Art of the Animal video series, thanks to her magical poetry), how she gets through rough days (and how you can too), how she turns her angst into productivity, and how she manages to find hope for the future. So, in short, read this review, buy the book, and plan to listen to Saturday’s interview — which, okay I’ll say it, might be our best one yet.
***
Book Review: The Lucky Ones: My Passionate Fight for Farm Animals by Jenny Brown
Review by Katie Gillespie 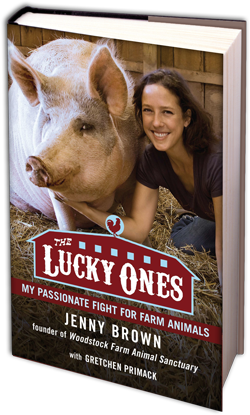 Maybe I’m a bit of a voyeur, but I love reading memoirs. Getting to look through a window into someone else’s life is endlessly fascinating to me (probably why I’m such a blog-reading junkie). Unlike the blogs I follow, which tend to be daily accounts of a person’s life and thoughts, book-length memoirs can cherry-pick important moments and weave them together into a cohesive narrative that shows an evolution – a journey. This is certainly the case in Jenny Brown’s memoir, The Lucky Ones [Avery, 2012]. Brown gracefully shifts back and forth in time, showing readers moments in the present, near past, and distant past – moments that make up her life today and have made her who she is and where she is in her journey.
Brown’s narrative (co-written by Gretchen Primack) takes us from Woodstock Farm Animal Sanctuary, which she founded in 2004 with her husband Doug, back to her childhood, when she was diagnosed with cancer and had to have her leg amputated, and shows the struggles associated with this time in her life (improved greatly by the companionship of a cat named Booger, affectionately known as Boogie). The story weaves gradually through her teen years and college – with Brown finding animal rights activism, going to film school, becoming an activist herself, moving through a career in film production, and finally making her way to founding her own sanctuary. Interspersed are stories of individual animals living at WFAS. As we get to know Brown in each phase of her journey, we become familiar with the animals with whom she currently shares her life.
Telling the animals’ stories and her own opened up places in her memoir to interject informative, unflinching truths about the way humans exploit animals for food, fashion, science, and entertainment. And Brown has no shortage of her own personal experiences to share. She worked with PETA and Farm Sanctuary to gather invaluable undercover film footage in various spaces of animal exploitation — from stockyards in Texas to a facility in North Dakota that collects horse urine for menopause drugs. Brown’s descriptions of these places and, in particular, what it felt like to be there, allow the reader to witness, through her eyes, the realities of these industries and the widespread suffering of animals trapped there. Brown’s voice comes through with an unwavering clarity in these passages. I felt her rage, her broken-heartedness, her compassion, and, through it all, her hope.
In other parts of the book, too, her raw emotion and candid honesty about the difficulty of this kind of work provides some comfort for those of us who have chosen to engage in living with, loving, and losing animals. Regarding the death of Boogie, who was her feline companion for eighteen years, and who originally inspired Brown to devote her life’s work to animals, she writes:

When I came home from a trip I’d sometimes still look for Boogie as I set down the suitcase. People kept telling me it would get easier, but a year after her death I still felt her loss deeply. That kind of pain is the price we pay for loving. The more lives we gather into ours, the more loss we’re left to deal with. I am glad to be someone willing to make loss part of my life, since it is part and parcel of the quality of those rescued lives, but it is endlessly hard.

In spite of the painful nature of some of the stories that Brown has to tell, this is a book that is beautifully written in a warm, conversational tone. For most of the book, I felt like I was sitting out in a field at WFAS with Brown and the cows, listening to her tell me the story of her life – and the stories of Boone, the gregarious and friendly turkey; Albie, the goat whose leg had to be amputated shortly after arriving at WFAS, and who has learned to walk with a prosthetic leg; and Dylan, the calf who loves his surrogate mother Olivia (a goat).
At the same time that The Lucky Ones felt like a relaxing, intimate conversation with the author, it also affected me in unexpected ways. Memoirs certainly tell stories and offer a deeper look into the lives of those who write them, but great memoirs, like The Lucky Ones, can inspire change, even as their words shed light on the dark corners of human and animal suffering. Brown has a rare gift – in spite of the hardships she has faced, she has kept a great sense of humor. I’d read a chapter and laugh and cry a wee bit hysterically, and then jump up off the couch with a wild urge to do something to help animals.
Her story challenged me to act. I was able to read this book only in short spurts, because it so motivated me to do something that I couldn’t sit still! I finally made it through Brown’s inspirational memoir by keeping a pen and paper at my side, so I could jot down all the ideas for action that came into my head as I was reading.
I celebrated finishing the book by heading out for a full day of work at Pigs Peace Sanctuary on its 18th birthday. Even now as I write this review, I’m fidgeting in my seat with the anxious enthusiasm to get off my behind and do more for animals. With that, I’ll urge you to pick up The Lucky Ones and be ready to be inspired and moved to action by Brown’s life and work.
Photo at top of blog: “Miss Piggy,” a happy resident at Woodstock Farm Animal Sanctuary.

Episode 140: “There is nothing complicated about equality.”