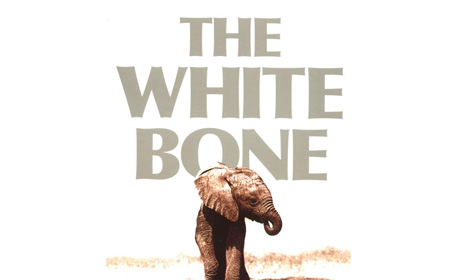 Today we’re excited to welcome guest-reviewer Kaitlyn Zafonte, who will give us her take on The White Bone by Barbara Gowdy.

When one thinks of talking elephants, something of the Disney variety probably comes to mind. But Barbara Gowdy’s harrowing tale of elephants’ struggle to survive in a habitat continuously destroyed by human invaders does not invoke any thoughts of the Dumbo variety. The White Bone is a grueling, heart-wrenching account of the natural world fighting against the onset of environmental change and human interference. 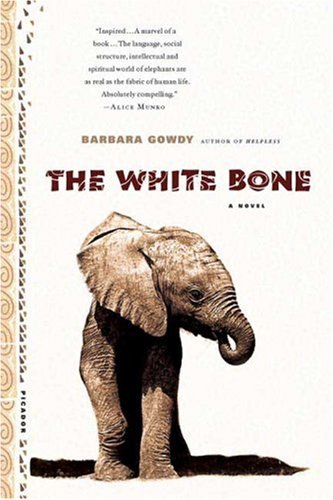 The White Bone by Barbara Gowdy

The story itself is an old one told through new eyes. Our protagonist is Mud, a young female elephant coming of age in a changing landscape. Mud, who is entering adulthood, is hesitant to embrace the pseudo-matriarchal structure of her herd. While it is the females who ostensibly direct the families, they must remain submissive to the roaming males and their sexual desires. As Mud attracts the attention of Tall Time, a unique young male with the special gift of reading omens and signs, the story vacillates between Mud’s maturation, her hesitance to accept her impregnation by Tall Time, and her family’s attempt to survive a severe drought. Meanwhile, there is the impending threat of violent death at the hands of humans seeking valuable ivory from the elephant tusks. As the novel progresses, Gowdy introduces the concept of the titular White Bone, a remnant of a baby elephant’s rib that, if found, will point the struggling survivors to safety. Thus, Mud’s bildungsroman transforms into a quest narrative as the elephants journey in search of peace.

Gowdy’s skill as a writer allows her to create characters for whom we care deeply, and, as we hear the story told from the animals’ perspective, we vividly experience the pain they endure. Reminiscent of the well known Watership Down (see the Our Hen House review), Gowdy creates her own elephant lexicon, and it is through this language that we gain access to the innermost thoughts of the elephants and the way in which they view their surroundings. Readers may be skeptical; however, the new vocabulary is indeed used with a natural rhythm. Within the matter of only a few chapters, I easily comprehended even the more metaphorical of Gowdy’s terms. For instance, “away vision” refers to a prophesy of a distant place in the present moment, and “third eye” is defined as the visionary capacity of certain mind-reading elephants. Some of the terminology is more straightforward, such as “flow-stick” (snake) and “jaw-long” (crocodile), managing to ground the novel in a very visceral way in the African landscape.

Perhaps the most interesting aspect of The White Bone is Gowdy’s perceptive commentary, made, of course, through the elephants, on the nature of humanity. Gowdy’s elephants maintain that the earth was a peaceful place before the Descent, when humans (“hindleggers”) began to populate elephant territory. Pre-human earth is reminiscent of Eden before the fall. However, in Gowdy’s novel, it is not the humans who are led to sin. It is the humans who cause the fall, encompassing all that is sinful themselves. This is an intricately painted history with many facets and complexities. Gowdy writes:

The emergence of humans did not, as is widely assumed, initiate a time of darkness. On the contrary, in the first generations following the Descent, The Domain was a glorious place and this is partly because humans back then were nothing like today’s breed. They ate flesh, yes, and they were unrepentant and wrathful, but they killed only to eat…There weren’t any massacres or mutilations.

The elephants’ insights about human nature shed light not only on their own relationship with humans, but much more broadly on the state of our current environmental — particularly agricultural — problems, and serve as a haunting condemnation of the devastation of factory farming. Once excess and greed became rampant, humans were “[s]oon slaughtering whole families. After devouring the flesh of their kills, they were burning the hides and pulverizing the bones and tusks. They seemed bent on annihilation.” 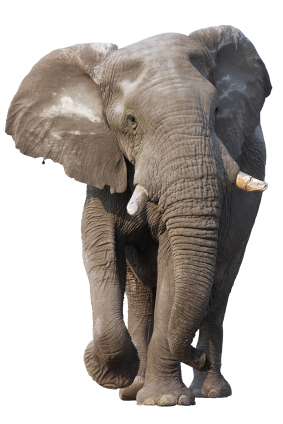 This description of human behavior is certainly not limited to distant places with fantastically talking animals. Couldn’t the same be said about the chickens pumped with antibiotics and growth hormones so that their breasts become so large they can no longer walk? Or canned hunts where wild animals are trapped on an enclosed plot of land so that a gun-wielding human can easily track and shoot them without effort? And that is what truly makes The White Bone so compelling. Although the novel could very easily be dismissed as mere fantasy, an undeniably truthful thread runs through it that grounds it in our everyday reality. Using fantasy as a vehicle to convey these important issues, Gowdy reminds us of a basic reality. From fantasy springs cold, hard fact: humans have lost control and no longer eat (or kill) for sustenance and survival, but for the sheer act of consumption.

Honestly, there were times when I had difficulty reading portions of the book, because, as I am sure is true of many readers of Our Hen House, I struggle with images of brutality towards animals. And Gowdy does not shy away from violent depictions. As with many things that pertain to animals, however, it is sometimes necessary to familiarize oneself with brutality and inhumanity in order to become educated and move forward, armed with new insight and knowledge. The White Bone will certainly stick with me for these reasons. Yet it is not necessary to be an animal advocate to appreciate this truly memorable reading experience, which allows the reader to empathize with the elephants’ plights in the same way that one would feel for a human character. In fact, what The White Bone demonstrates is the complexities inherent within and between species, and the urgent need to return to a simpler and more humane way of interacting with each other. 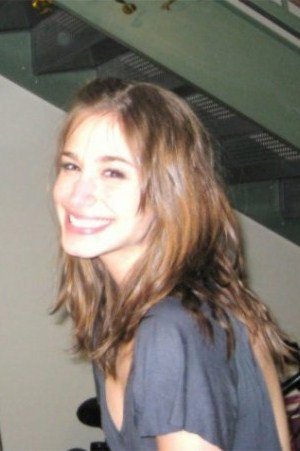 Kaitlyn Zafonte is a vegan living and writing in New York City.  She has an MA in English & American Literature from Fordham University and helped run an animal welfare group on her undergrad campus where she worked closely with Farm Sanctuary.

Episode 83: “Lots of people talk to animals… Not very many listen, though… That’s the problem.”