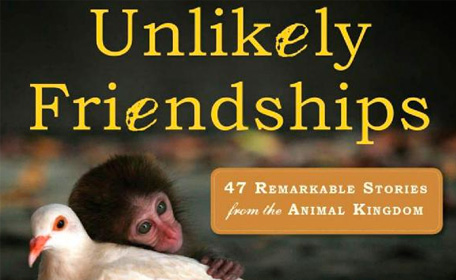 Joining us today in Our Hen House is attorney Samantha Rosenberg, who is giving us her take on the book, Unlikely Friendships: 47 Remarkable Stories from the Animal Kingdom, by Jennifer S. Holland.

A Look Inside Unlikely Friendships

Fair warning – get out the tissues. Unlikely Friendships: 47 Remarkable Stories from the Animal Kingdom pretty much redefines the word “heartwarming.” Bringing together forty-seven stories about interspecies friendships from all over the world, this beautiful book – appropriate for all ages – is illustrated with amazing photographs that truly capture these hard-to-believe animal unions, often between animals who are normally identified as predator and prey. 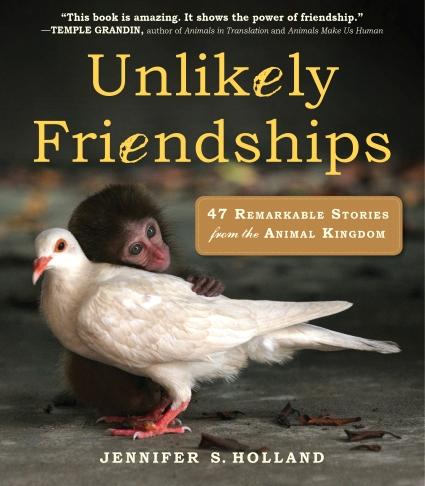 As set forth in her introduction, the starting point, and impetus, for this remarkable compilation by Jennifer S. Holland – a science and nature journalist and senior writer for National Geographic magazine – was the conflict in the scientific community between those who reject, and those who embrace, the idea that non-human animals have the capacity to experience emotions similar to humans. Of course, the former view has the benefit of convenience, in that it makes all the torture and confinement performed in the name of science (and appetite) easier to justify. If scientists are able to convince themselves that animals cannot feel emotional pain, the moral dilemma simply disappears. The other school of thought, which hopefully represents a growing majority, holds that emotions are inherent in all sentient beings to some degree, even if they are expressed in different ways. As summarized by evolutionary biologist Marc Bekoff, this position holds that “evolutionary continuity — a concept that came from Charles Darwin — stresses that there are differences in degree rather than in kind between humans and other animals. That applies to emotions. We share many bodily systems, including the limbic system, where emotions are rooted. So if we have joy or sorrow, they have it, too. It isn’t the same joy or the same sorrow. But the differences are shades of gray, not black versus white.”

Unlikely Friendships takes that abstract premise and makes it real. Mindless instinct cannot possibly account for these extraordinary relationships: A dog and a koi meet regularly at a pond to bump noses and connect on a level that makes you question the complexity of a fish’s mind; a cow tied up in a field is visited nightly for months by a wild leopard who seems to want nothing more than a snuggle and a tongue-bath; a momma dog accepts a baby squirrel into her litter; a hamster served to a snake as dinner becomes his friend instead; a lioness protectively watches over her adopted baby Oryx; and too many other remarkable stories to mention, each guaranteed to melt your heart and challenge your preconceptions about animals. Furthermore, while the photographs are stunning, the book is far more than just cute pictures. Each story, although brief, sheds light on the often tragic circumstances that brought the animals together, and into the lives of humans, who were able to witness, and document, the ways the animals related to one another. Despite their sad beginnings, these animals ultimately triumphed, finding solace, joy, and friendship.

A few of my favorite stories include “The African Elephant and the Sheep,” which is about a baby elephant named Themba, whose mother fell off a cliff when Themba was just six months old. To the surprise of the staff at the reserve, none of the other female elephants stepped up to adopt Themba. Recognizing that it was a critical time in Themba’s development of social bonds, one of the workers brought a sheep from a nearby farm, Albert, and put him into Themba’s enclosure. Why a sheep? Not only are they intelligent, but sheep have been shown to form close emotional connections with other animals. It wasn’t an instant fix – the two didn’t hit it off at first. But after a while they became inseparable, sleeping together and even eating the same food. Finally, this lonely little elephant had a friend.

Then there’s “The Bobtailed Dog and the Bobtailed Cat,” which documents a moving friendship that was born in New Orleans right after Hurricane Katrina, when hundreds of thousands of animals were left to fend for themselves. The bobtailed dog of the title had been left tied up to face the storm, but had managed to break away, dragging with her the remains of her chain. Somehow, she hooked up with a bobtailed cat, and they wandered the city together for weeks. When anyone tried to approach, the dog, later named “Bobbi,” growled protectively. Nevertheless, eventually the two were rescued and taken to a shelter. There, Bobbi let out piercing barks whenever anyone tried to separate her from “Bob Cat.” Realizing that the two needed one another, rescuers caged them together. Only later did they discover that Bob Cat was totally blind! Bobbi had been using barks and bumps with her hind leg to guide Bob Cat around.

Because of the unusual pairings of species, the stories in Unlikely Friendships depict relationships that may be surprising. But anyone who has ever had an animal companion in their life, or has even just observed animals – be it through volunteering at a shelter, visiting a sanctuary, or spending time with a loved one’s pets – will agree that there is no question that they have individual personalities. Indeed, animals of all kinds experience the feel-good emotions that are depicted in this book, and – like us – they also feel sadness, depression, anxiety and grief. They also form relationships in astounding ways that we neither orchestrate nor control.

I have certainly seen that in my own home. My 11-year-old daughter and I have two cats, both feral rescues, who are alone together all day, five days a week. Yet, even after three years of living together, they can barely tolerate each other’s company. Despite the “sibling rivalry” they have, one of the cats has bonded with my daughter in a way that is almost otherworldly. Utterly protective, she perches on my daughter’s back while my daughter sleeps, follows her everywhere, shows her constant affection with unending little kitty kisses, and, whenever she thinks my daughter is hurt, immediately comes running. Who could ask for more in a companion? This kind of deep human-animal connection is relatable to so many of us. It is, after all, an unlikely friendship – but it’s also the best sort.

The fundamental lesson in Unlikely Friendships is, perhaps, that animals interact with other animals – human and non-human – on levels that are not very different from our own. Much like human relationships, motivations for animal unions may be rooted in their need for protection, comfort or companionship. But regardless of the reasons that brought them together, many of the bonds between these animals are the product of a true emotional connection that can only be classified as genuine friendship. These stories are great reminders of how alike animals and humans are. At the end of the day, we are all seeking pleasure in some form. If we’re lucky, we manage to find it in each other. 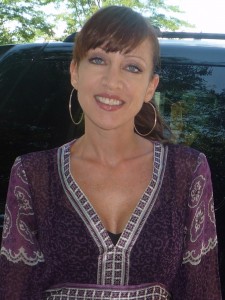 Samantha Rosenberg is an attorney  living in Cambridge, MA, with her 11-year-old daughter and two cats.

Episode 105: “When you cease to make a contribution, you begin to die.”