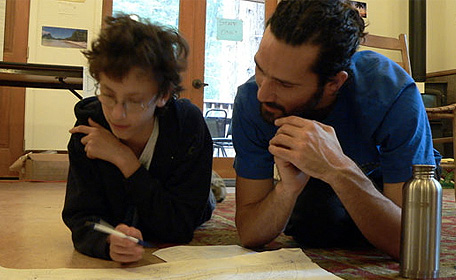 Remember summer camp? For most of us, those words alone bring us back to thoughts of muddy socks and July romances. For me, my adolescent summers were spent at a theatre camp in the Catskills, where I learned just as much about perfecting my triple time-step as I did about perfecting the art of drama – and I’m not talking about Shakespeare’s tragedies. Twenty years later, I still have a flair for the over-exaggerated eye-roll. But what I really wish I had learned back in the early 90’s was how to take that passion I had seeping from my pores, and plug it into something bigger than my own histrionics.

It wasn’t until I was in college (yes, as a theatre major) that I got involved in social justice issues. In retrospect, I wish that had happened in my childhood — that someone had handed me a clipboard and a megaphone, and showed me that caring (something all kids are born with) can be crucial, and getting further involved with creating social change is, well, necessary.

Perhaps if YEA Camp (that’s “Youth Empowered Action Camp”) existed back then, things would have been different… 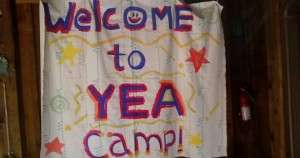 When I first heard about YEA camp – an “innovative camp for young activists and changemakers” – I thought, YES! This is exactly what we need to empower young people to change the world. Then, I wondered if 30 was too old to enroll…

From their press release:

Is your son a vigilant recycler? Your daughter a passionate vegetarian? Your niece an idealist who wants to change the world? What are they doing this summer? What mentor or peer support do they have to take action for the things they care about?

There are camps for teens who like volleyball or theater or want to lose weight. But what about for kids who want to make a difference in addressing global warming or homelessness or homophobia?

An innovative summer camp for kids ages 11-15, Youth Empowered Action (YEA) summer camp inspires and empowers youth leadership to make a difference by developing skills, knowledge, confidence, and community. Its attendees are the future heads of their high school or college environmental club, the future donors and volunteers of community nonprofits, the future executive directors of Greenpeace or the Humane Society or the Human Rights Campaign.

In its second year, YEA will be held in 2 locations this summer, one in the Bay Area, outside of Santa Cruz, and the other in the Portland, OR area.

“YEA is a place for young people who want to make a difference in the world to feel proud of their passion, to meet like-minded people and learn from one another, and to be inspired by possibilities for leadership,” YEA Founder and director Nora Kramer said. “Our campers are amazing.”

Parent Mike Boss of San Francisco shared, “I want you to know wonderful and vital YEA camp was for our daughter! She not only loved her time there, but she came back with something which I believe will be of lasting value to her, namely a sense that she can make a difference in the world.”

YEA is a nonprofit 501(c)3 fiscally sponsored by Youth for Environmental Sanity.

To find out more about YEA Camp, or to apply, visit www.yeacamp.org.

In addition to a really cool place for your kids to spend their summers — a place where they will build crucial skills necessary to ensure that our planet and all its inhabitants have a chance — YEA camp is a perfect example of turning your passion and advocacy into a career. Though it’s evident that it’s not income which fuels the organizers of YEA Camp, yielding a profit — while furthering your mission and advancing social justice — can be as fulfilling as it is change-making.