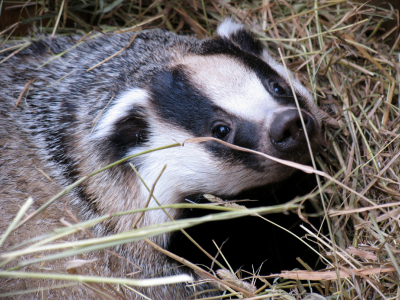 There are, of course, many great things about England, but I think anyone would have to admit that two of its finest products are aging rockers (the fact that Paul McCartney and Mick Jagger are still at it makes me feel younger every day) and its badgers, those black and white nocturnal balls of fur that scurry about the English countryside, making it even more lovely (remember the wise and kind Badger from The Wind in the Willows?). And now, with badgers under siege, it seems appropriate that a few of those rockers are coming to the rescue in the best way they possibly could — by singing about it.
This summer, British officials are set to kill badgers by the thousands. (They like to say “cull,” by which they mean “kill.” It apparently makes them feel it’s all very appropriate and scientific.) And this is just a prelude to the real plan — which will involve the death of 100,000 of these gentle creatures. Blamed for the outbreak of tuberculosis amongst English cattle (an increasingly loud chorus is saying  that they are unfairly targeted, and that the solution lies elsewhere), badgers are the fashionable wild animal villain du jour, and they are about to suffer horrendously for whatever offenses people imagine they have committed. No one, of course, is considering blaming cattle farming, or humans, for doing anything harmful. All the blame is being laid on these lovely, striped, fur balls.
The rockers to the rescue include Brian May, formerly of Queen; Slash, formerly of Guns N’ Roses; and Shara Nelson. They are joined by David Attenborough (I was astounded to hear that he could sing, until I realized his contribution was spoken) and some not-so-aging British musicians, Southend rapper Sonny Green and Sam and the Womp. Styling themselves The Artful Badger, they are bringing the badgers’ plight to a huge audience that would otherwise not know about it, or think to care about it. And they are providing a powerful tool for everyone fighting for the badgers to use in getting people to listen to the message that killing badgers is wrong, and must be stopped.
I particularly like what May had to say, as reported in The Guardian, at a recent pro-badger rally, “[This] is a fight against the old-fashioned, bloody-minded, ignorant attitude that human beings and money and political power are all that matter. It’s a fight for the rights of the other creatures on this planet – for their very right to live in these islands.” You can hear the song below, but note that May, Slash and Attenborough do not appear on the video.

Episode 180: “You have just dined, and however scrupulously the slaughterhouse is concealed in the graceful distance of miles, there is complicity.”

Help Us Cook Up More Episodes!

Gretchen Primack’s Animal Rights Poetry, Plus a Bonus Giveaway for the Flock...