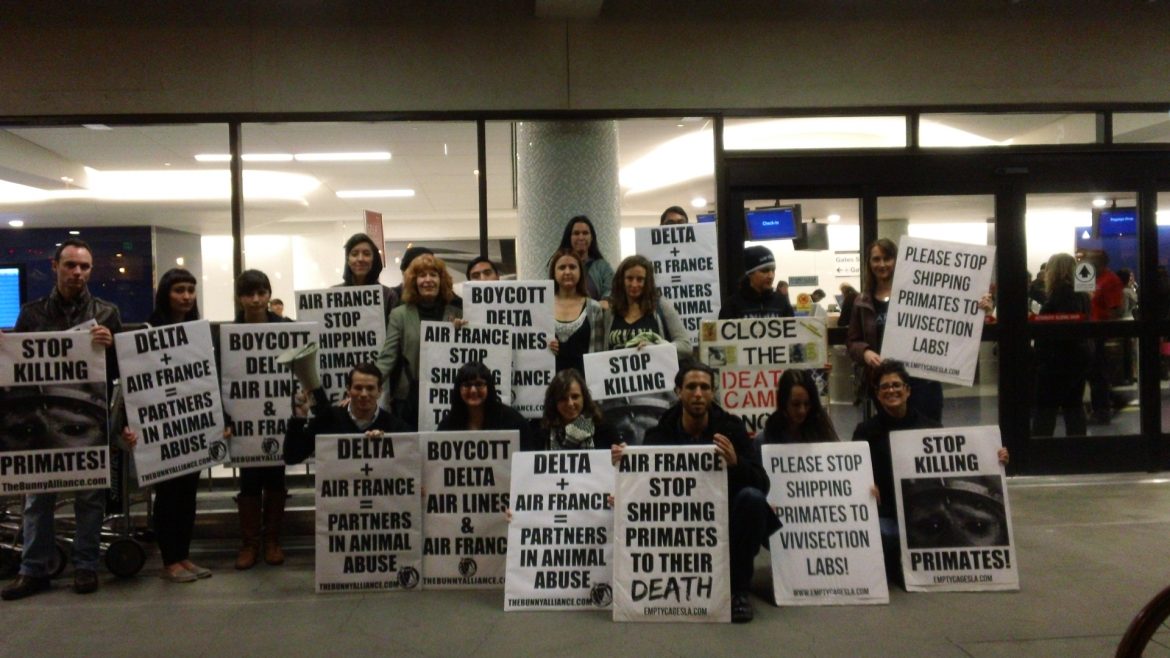 One of the many forms of animal exploitation that we here at Our Hen House would like to put an end to is vivisection. It can be tricky to know how to make a dent in such an entrenched issue, but one strategy that has been effective is to campaign for airlines to refuse to transport animals destined for labs.
Amanda Schemkes is an experienced animal rights activist who currently runs the grassroots organization, The Bunny Alliance, with Jordan Ezell. They are embarking on a tour as part of the larger anti-lab-animal-transport “Gateway to Hell” initiative, where they will not only organize demonstrations but also train activists to get involved during this campaign and beyond. I recently had the opportunity to ask her a few questions to learn more about her inspiring work.
***
Amanda Riley (for Our Hen House): First off, what other experience do you have in the animal rights movement and why did you want to start this campaign?
Amanda Schemkes: I’ve always loved animals, and when I […] learned that not only are animals killed for meat, but they are also exploited and killed for their eggs and milk — as well as for research, clothing, and entertainment, […] I became vegan. But that wasn’t enough; I couldn’t sleep knowing that animals were suffering on farms, in labs — so I got involved in animal rights activism. Since then, I’ve done extensive vegan and animal rights education. […] I’ve also planned a number of vivisection and fur protests and have been involved in several long-term campaigns. Additionally, I’m now in law school because I want to expand the tools I have to fight for animals.
I’m working on this campaign with Jordan Ezell, who has been involved in radical activism since 2008 and began working on animal rights issues in 2010. The focus of his activism has been anti-vivisection campaigns, and he quickly moved into organizer positions. Jordan has also toured doing animal rights outreach and was one of the organizers of last year’s Animal Liberation Forum.
Jordan and I decided to launch a campaign against Delta Air Lines through our group, The Bunny Alliance, because we want to put an end to vivisection, and campaigns to get airlines to stop transporting animals to laboratories are strategic and effective — and so they have been having a lot of success. We are specifically targeting Delta Air Lines because it is in a strategic partnership with Air France and is Air France’s North American representative — and Air France is one of the last commercial airlines that continues to fly animals to labs. Because of Delta’s relationship with Air France, Delta is in a unique position to convince Air France to place a ban on animal transport, and we are holding Delta accountable for the responsibility it has to do this.
OHH: Can you explain what the larger Gateway to Hell campaign is and how this tour fits into it?
AS: The Gateway to Hell campaign is a worldwide effort to end the transport of animals to labs, and activists from all over have been engaging in protests and other actions to pressure airlines to stop flying the animals. Airline after airline has been putting permanent policies in place against transporting animals to labs.
This tour is to bring the Gateway to Hell campaign, and our specific focus on Delta, into activist communities all over the U.S. in order to build both the campaign and a network of activists. […] [It] is not just about campaigning against Delta, but about inspiring a nationwide network of activists to get out in the streets in the fight for animal liberation and to demand an end to the exploitation and oppression of anyone, whether they be a non-human or human animal.
OHH: Why is the movement to stop lab animal transport important in ending vivisection overall?
AS: Many animals who are used in vivisection, such as primates and dogs, are transported long distances — even between continents — from their homes in the wild or breeding facilities to laboratories. So, to put it simply, putting an end to this transport puts an end to the use of those animals in laboratories and presents a huge obstacle for labs to deal with — an obstacle that can force them to shut down or explore humane alternatives. 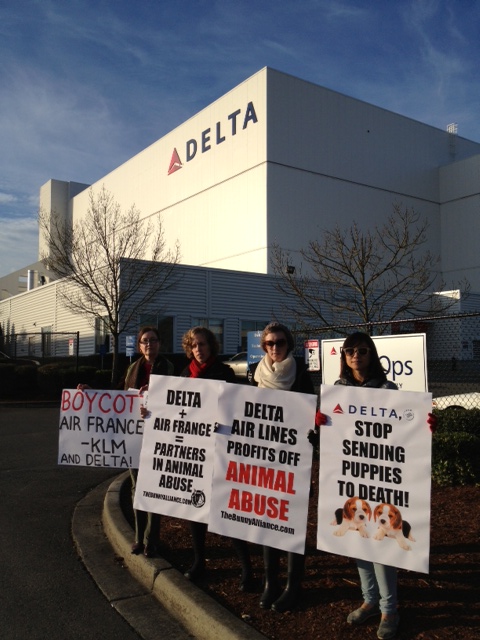 OHH: What steps have you taken in your Delta Air Lines campaign so far, and what were the results?
AS: The campaign against Delta Air Lines has just recently launched with a strong start. For the day before “Thanksgiving” — the busiest travel day in the year in the U.S. — we coordinated demonstrations at the Seattle International Airport, Portland International Airport (with Portland Animal Liberation), San Francisco International Airport, and Los Angeles International Airport (with Empty Cages Los Angeles). These first demonstrations received a lot of support from the activist community, were a great chance to collaborate with local animal rights groups, had a positive response from the public, and showed Delta Air Lines that we are serious about shining a light in cities everywhere on its relationship with the vivisection industry.
OHH: When you embark on this tour, what will a daily touring stop look like for you and what activities will it involve?
AS: Each tour stop will include a demonstration at one of Delta’s hub airports that will bring the message to the public, garner media attention, and give us the chance to protest with local activists. Many stops will also include demonstrations at Delta offices, including their headquarters in Atlanta, and we will also hold a demonstration at the New York Stock Exchange because Delta is a publicly-traded company. We will also host an activism workshop in each city to educate activists about the campaign and how they can get involved, share activism tips and offer resources, and provide basic legal information related to protest campaigns.
OHH: Finally, how can people learn more about this campaign and what can they do to get involved?
AS: You can visit our website and email us at thebunnyalliance [at] riseup [dot] net. You can also find us on Facebook, Twitter, and tumblr. Please also watch a short video (see below) about our tour — and the animals who are the motivation — and consider making a donation to help fund the tour, which you can do through our website.
Please do get involved. As much as we appreciate people caring about the animals and what we are doing, we know that just caring won’t save the animals from laboratories or any other nightmares. For all animals, join us in effectively working for their liberation — and settling for nothing less. Let’s start acting like they desperately need our actions as much as they truly do.