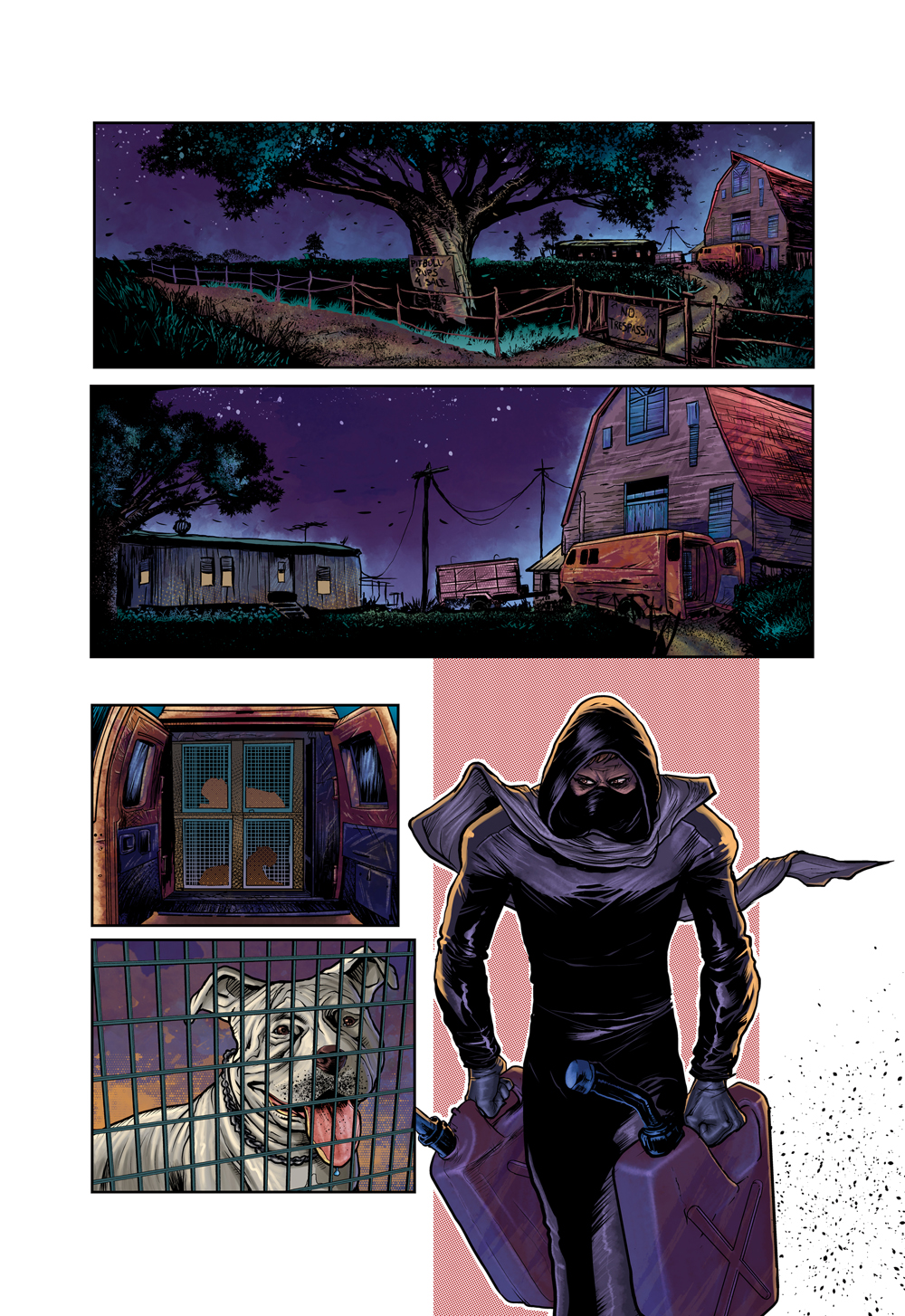 Can an Animal Rights Themed Comic Change the World? We Think So. (OHH EXCLUSIVE!)

When we heard about the new animal rights themed comic series, Liberator, written by Matt Miner, the world made a little more sense to us. We love creative advocacy, which is hardly a secret. A comic that speaks up for animals but has wide, mainstream appeal? Sounds like the stuff vegan dreams are made of. For Matt Miner, the creator of Liberator, that dream has been a long time coming — and, finally, it’s here.

Our Hen House: Congrats on the publication of the new animal rights themed comic series, Liberator, which you are writing (and the talented Javier Sanchez Aranda is illustrating). Give us a brief synopsis of what Liberator is about. Matt Miner: Liberator jumps right into the action with two animal rights activists, one above ground (legal) activist and one underground (illegal) activist. The duo have very different tactics but the same goals, to save animals and end exploitation. Through the first arc, they work on tackling several minor targets while working on taking out a fur farm on the outskirts of the city.

Throughout the series, you’ll see these folks grow, and come to realizations that force them to change their tactics and methods of fighting back while remaining nonviolent. In addition to the 24 pages of sequential art in each issue, we’re also including articles from figureheads in the animal rights and animal rescue movements that directly correlate to the specific issue’s storyline.

So, for instance, in the back of issue 1, we have an article from folks with the North American Animal Liberation Press Office defining nonviolent direct action, and the reasons property destruction are employed by some people as a part of these actions. Plus we have a piece from Toni Phillips, the head of Mariah’s Promise Animal Sanctuary, about issues surrounding the targeting of pit bulls, breed specific legislation, and dog fighting.

In later issues, we have scheduled people like Shannon Keith to talk about vivisection and her work saving beagles with Beagle Freedom Project, and Jenny Brown, co-founder of Woodstock Farm Animal Sanctuary (my favorite place on Earth, by the way!), who will be writing an article on animals used for food, highlighting some of the animals at the sanctuary.

OHH: How did you concoct the idea for it?

MM: Well, I’ve been a comic book reader for most of my life. I was bullied throughout my childhood, and I found comfort escaping into books and comics where heroes did the right thing and bad guys got what was coming to them. As I got older, I kept reading comics because the comics I became drawn to started to grow up as well – the stories matured along with me. When I became vegan and learned of underground activists like the ALF, this idea of masked heroes taking action for animals really resonated with me. To me, these activists seemed like Batman, but for animals! So for about 10 years, this idea of writing ALF-style activists as comic book heroes for a mainstream audience has been in the back of my head.

OHH: One thing I find particularly interesting about this project is that you got the funds to bring it to fruition thanks to a Kickstarter campaign. Can you tell me why you went this direction in terms of seeking funds, and the role you see Kickstarter (and other crowd-funding campaigns) playing in terms of creative projects centering around social justice?

MM: I brought my idea to Kickstarter because it’s an amazing way to reach new people and raise the necessary funds to complete a project. I paid for much of the first issue out of pocket, selling off part of my own comic collection and draining my meager savings. Then, after I’d pitched the series successfully to a publisher as a creator-owned project, I went to Kickstarter to raise the rest of the money needed to fund the remaining art. For this project, a portion of the proceeds (my entire cut) will go to help fund animal rescue.

Making comics is crazy expensive. If you don’t have any art skills yourself, you have a penciller, inker, colorist, letterer and production artist who all have to be paid – these folks don’t work for free, and their contribution to a project is extremely valuable and deserves compensation. I didn’t have the funds, so I went to Kickstarter and we ran a really great campaign that reached out to both the animal rights world and comic book fandom, and brought the two together.

As far as Kickstarter playing a role in social justice projects – it’s already doing it, and doing it well. If you have an idea for a great project that’ll help animals or people, now is the time to make it a reality! Don’t wait, do it now – figure out what you need to run a great Kickstarter project and do it!

OHH: Regarding vegans and “animal rights people,” you recently told me that you “desperately want to inject animal rights ideas into this comic reading segment of the population who already idolize masked vigilante heroes.” Can you expand on that a bit?

MM: I grew up reading gritty 80s Batman stories like Killing Joke and Dark Knight Returns, and so I gained a real appreciation for these stories of people who pull on masks and take drastic action. I know I’m not alone with this – there’s a whole bunch of fellow nerds like me who identify with this idea of masked vigilantism. It strikes a chord deep inside.

I went vegan basically overnight. One day I started watching animal cruelty videos online to see why vegans boycotted animal products; I wanted to know what drove people to adopt a plant-based diet. That was a tough night. Through my tears from watching videos like Meet your Meat, and the films exposing hellish labs like Huntingdon Life Sciences, I also stumbled upon more uplifting videos of these heroes in masks taking animals out of these hellholes, and this seemed like the stuff of great comic books just waiting to be written.

OHH: Do you think that there’s mainstream appeal with Liberator? In other words, is part of your hope that non-vegans will pick up this comic simply because it’s a great story with great illustrations, and then – bam! – before they know it, they’re thinking about animals in a new way? Do comics hold within their pages that kind of potential for changemaking?

MM: Absolutely. I’m focusing on the animal rights aspect during this interview because I can freely talk about it here without worry that your readers will think the book sounds “preachy,” which it’s not.

The book is primarily a vigilante justice adventure that anyone can pick up, read, and enjoy just for the storyline. Our two heroes are fully realized characters – strong individuals with real-world personalities and problems who change and grow through the series. Non-vegans will never feel preached at; there is no proselytizing in Liberator, but I also don’t sugarcoat the awful truth of what we as humans do to animals.

The support for Liberator on the Kickstarter was, as far as I can tell, about 50/50 with existing comics readers and animal rights folks. I think that’s awesome. OHH: Can you give me an example of any other comics you personally dig that speak up for injustice?

MM: Alan Moore and David Lloyd’s V for Vendetta, Grant Morrison and Frank Quitely’s We3, and Joe Harris and Martin Morazzo’s Great Pacific are the three that come to mind. They all focus on different aspects of social justice and they’re all fantastic.

OHH: I know you’ve been outspoken about other issues as well, such as feminism. Explain how female characters are portrayed in comics, by and large. Do things needs to change there?

MM: It’s no secret that female characters in comics are largely portrayed as half-naked eye candy for the male reader. Often, these characters have no real personality outside of their “sexy parts,” and they’re frequently only brought to life to be used as a plot device to empower the male hero. Misogynistic storylines are abundant, and women in comics – both on and off the page – are often treated poorly.

It’s something that needs to change, and there’s definitely a drive from a handful of creators toward making that happen. Liberator will never have “camera” shots that focus on the female hero’s ass or breasts. The hero here – Jeanette – will always be fully dressed; she’s not eye candy, a prop, a trope or a plot device. She’s not “the girlfriend” or the sidekick. She’s a fully developed, strong hero character in the vein of Judge Anderson from DREDD.

OHH: Any advice for aspiring comic writers and illustrators who want to use their talents to speak up for animals?

MM: Do it because comics need new voices, new ideas and new storylines. Do it because animals need your voice. Liberator was picked up by a publisher because this idea of underground activist heroes who help animals is a new and fresh idea in comics. That means that all those people reading about Batman or Spiderman are potentially going to be exposed to entirely new ideas of institutionalized animal abuse, and they’ll also be exposed to those who work for animal liberation – all through a bad-ass hardline action adventure comic. How cool is that?

OHH: What’s next for Liberator?

MM: After the first story arc, I’d love to take Jeanette and bring her into a solo series. She’s such a cool character, and I think she’s amazing. I’d love to explore what makes her tick and what brought her to the point that she’s taking action for animals.

OHH: How can people get Liberator?

MM: Issue 1 is available for pre-order now! Pre-ordering is crucial for independent comics; if there aren’t enough shop orders, then the distributor will cancel carrying the series, which means that the dream for Liberator to reach new eyes would be largely over.

Check it out online at Midtown Comics, if you’re in the USA, here.

If you’re in Europe, you can order from Forbidden Planet here.

OHH: Tell us a secret – something you absolutely did not expect to talk about in this interview.

MM: I’m horribly sentimental with my nerd-dom. When the opening music and credits roll during any Star Wars movie, I end up teary-eyed. Every time. FLOCK ONLY: “Save the Kales!” T-shirt & DVD Giveaway, Plus More from...

Episode 16 of the Our Hen House TV Show is Now Viewable...