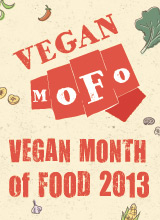 Today is the third day of Vegan MoFo, and I, for one, cannot wait to see what goodies some of my favorite blogs have in store. Every September, food bloggers are challenged to devote at least 20 posts to all things vegan — vegan food, vegan conversion stories, vegan recipes, “accidentally vegan” items, and so on. This year, the blog roll of MoFo participants includes hundreds of your favorites — from JL Goes Vegan (who is vlogging this month!), to Carrie On Vegan (this is her third year participating), to Just the Food (is this not the cutest website you’ve ever seen?) — to name but a few.
Aside from my own selfish interest in MoFo (I cannot get enough of things like Five Cheese Baked Macaroni and Cheese — the vegan version, duh), it thrills me to see an organized effort like this bring together bloggers worldwide with the common goal of raising the bar and raising attention when it comes to veganism. The organizers insist that you don’t have to be vegan to participate, but all MoFo posts during September most certainly must be.
According to the website, “VeganMoFo was originally created on the Post Punk Kitchen, as an homage to NaNoWriMo [National Novel Writing Month]. Because we do want to write novels, but sometimes cooking gets in the way. So why not combine them?!”
This reminds me of other organized efforts advocating veganism — like that of the immensely popular Worldwide Vegan Bake Sale. These kinds of grassroots efforts have serious potential for reaching folks who would otherwise not notice if a vegan cupcake hit them in the face. If there’s one thing we vegans have got, it’s community. So why not latch onto that and show up en masse, even if it’s virtually? I love taking part in campaigns, knowing that I’m united with others who are just as passionate about animal rights as I am.
The more we write about veganism, and the more we share it, the more it gets seen, and the more people get inspired to ditch the animal products. So the fact that Vegan MoFo is steadily growing in popularity is a win for the animals.
As we’re changing the world for animals, we might as well also change the world wide web for them, too.