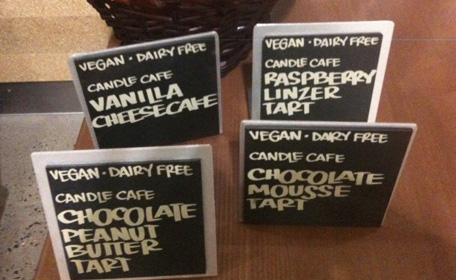 Mariann and I know how insanely lucky we are to live in NYC — when it comes to availability of vegan foods and veg restaurants, anyway. Not to show off, but I can’t even tell you how many vegan restaurants are in walking distance from our apartment. I know I know, you hate me.

But, tiny tangent for a moment: we travel kind of all the time, and without question, some of the best vegan food we’ve had has been in random places like Dallas, Kansas City, Philadelphia, and Atlanta. But yeah — NYC has a concentrated amount of veg restaurants, more than any other place on the planet I’d say. And even though we’ve had top-notch vegan food in other cities (I was just dreaming about Kansas City’s FüD the other day), that certainly doesn’t discount the exquisite edibles we are privy to right here in the urban jungle we call home. 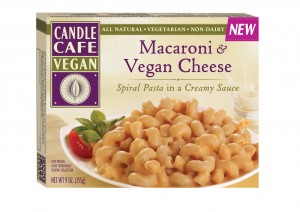 Not to point out the obvious, but Candle 79 and Candle Cafe are at the top of that list. Clearly, the Upper East Side-located “Candles” are a vegan destination worldwide. With Candle 79’s delectable entrees including Seitan Piccata (my fave), or Basil-Pine Nut Baked Tofu, you just can’t go wrong when you treat yourself to a special night out at Candle.

And once you get to know the owners — Joy Pierson and Bart Potenza — you will be that much more in love. Joy and Bart shared their story with us on our podcast last year, and though I don’t want to spoil it for you because I really think you should listen, let’s just say that they started Candle after winning the lottery! They are literally living your dream, I’d bet — to win the lotto and then start the most successful vegan restaurants in the world. Joy and Bart — as well as the rest of the Candle team, like dear sweet Benay Vynerib who basically runs the show there — are tried and true animal activists, too, donating so much of their time, money, and efforts to changing the world for animals.

Though you could accurately say that this is for-profit activism at it’s finest, the truth is, they extend their advocacy well beyond the for-profit world. As just one example, Candle 79 partnered with the New York Coalition for Healthy School Food, as well as NYC’s Department of School Food and Yale University’s Rudd Center for Food Policy and Obesity, spearheading a pilot program in Harlem that provided healthy vegan food to the students, which was complemented by an entire educational program regarding nutritious, compassionate food choices. 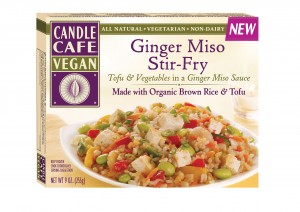 And now — and OMG I’m so happy for you — Candle Cafe is introducing gourmet vegan frozen meals at Whole Foods locations nationally! According to the press release, “New Candle Cafe Frozen Meals follow the restaurant’s mission to better the individual and the planet by serving delicious vegan cuisine rooted in eco-friendly practices and compassion for animals. Candle Cafe frozen meals share the restaurant’s compassion by proudly sponsoring The Humane Society of the United States and Farm Sanctuary.”

So not only are the Candle people bringing their scrumptious, cruelty-free cuisine to a Whole Foods location near you, but by purchasing their products, you will also be supporting the noble animal advocacy efforts of two incredible organizations. Plus, you’ll have what I’d say will be one of the best meals of your life. You just wait…

Candle Cafe frozen entrees are sold in 9 oz. trays, with a suggested retail price of $5.99.

I just love Candle… I JUST LOVE CANDLE! They are truly epitomizing the meaning of providing vegan food to the masses. Their mission of advocating for animals is loud and clear, and their reach is far. Oh, and their food is insane. As in, delectable. Have I mentioned that?

Episode 77: “…take out of our desires and our visions a template or a pattern for the future.”

Flock Only: Today’s Scoop from the Coop

Respectfully Irate: My Thoughts on (Effectively) Advocating for Animals in Letters to...