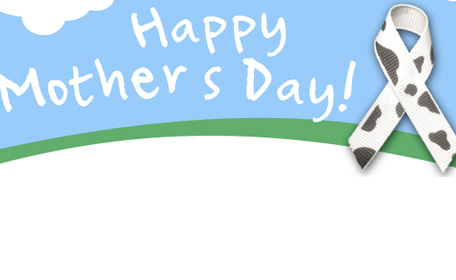 There is a small ribbon on my bag that gets some very big attention. Unusually, it is cow-patterned, hence the raised eyebrows on the subway, the head tilts and furrowed brows while waiting on line.

“What’s that for?” a woman at the grocery store recently asked me, pointing at my cow ribbon. I noticed her 2-year-old son sitting in the front of the cart, staring in wonder at the gossip magazines. 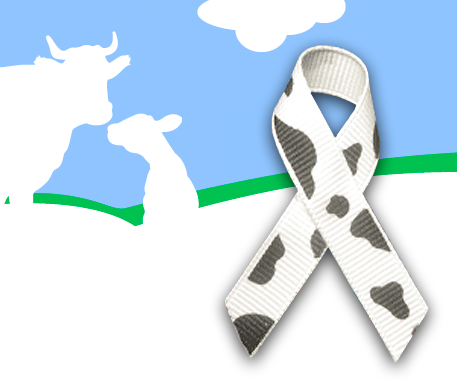 Get a cow ribbon.

I consciously erased my visible annoyance at the world — something I’ve been told I occasionally flaunt for all to see (perhaps it’s because I’m a New Yorker?) — and put on my friendliest face. “Oh,” I said with a genuine smile that I managed to muster, “it’s to raise awareness about the egregious suffering of dairy cows.” The woman seemed surprised, but genuinely interested. Clearly it wasn’t the answer she was expecting. I continued, “It’s actually pretty unbelievable what goes on. Calves are immediately taken away from their mothers, and the boys are usually sent off to be turned into veal.”

The woman interrupted me, “I haven’t had veal in years! Those cows are just babies!,” she told me, standing a little straighter.

“That’s great that you boycott veal,” I said. “And I hear you. The veal industry is disgusting. I remember how horrified I was when I learned that it’s a direct result of the dairy industry. One wouldn’t exist without the other.” I could see the woman taking this in, so I went on. “And the dairy industry is perhaps the worst of the worst, in terms of animal welfare — or lack thereof.”

She hesitantly nodded, and I got my cue to slow down. Her energy quickly shifted back toward her son, who was now grabbing for Angelina Jolie (not that I blame him for that). “That’s not for us, sweetie,” she said to him.

What I wanted to say then was “Yeah, neither is cow’s milk. That’s for the cow’s baby, just like your milk is for your baby.” But that would be rash, and this was a perfectly nice woman. So instead I gave her a friendly smile, since one of the tenets of good advocacy is when to know when your conversation is over… for now.

After I’d paid for my groceries — tofu, kale, frozen cherries, and,  to go with the cherries, chocolate hemp milk (heaven!) — I remembered that I had a stack of vegan recipe brochures in my bag. Jackpot! I handed one to the woman in line. “There’s some great recipes in here,” I said. “My 2-year-old niece loves the vegan mac n’ cheese.”

I smiled, and so did the woman, who gratefully accepted the brochure. She even stopped putting her groceries on the conveyor belt  — yogurt, frozen chicken nuggets, and some string cheese — in order to flip it open, and squint under her glasses to see what it had to say.

The cashier was annoyed; I was pleased. Two points, cow ribbon.

You Can Wear a Cow Ribbon Too 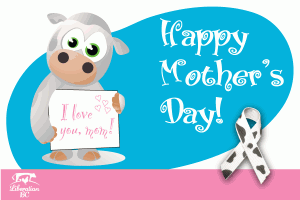 Remember all the moms.

The Cow Ribbon Campaign, a project of Liberation B.C., is one of my favorite annual campaigns. It happens each year around Mother’s Day as a way to “join hundreds of animal lovers in showing support for all mothers.” The website further explains why we should proudly flaunt our ribbons: “Wear it for the calves who will never know their mothers. Wear it for the cows who will never know their calves. Wear your ribbon to show your compassion for all of the animal mothers caught in our ‘food’ system.” The website even lets you send Mother’s Day e-cards that delicately (yet powerfully) explain the horrendous truth behind what mother cows go through — being forcibly inseminated (or raped) over and over again, having their babies ripped from them so that greedy humans can steal the milk that was meant for their offspring (their offspring who themselves become victims of either the veal or dairy industry), and ultimately, being sent to slaughter once they are considered “spent.” This Mother’s Day, remember all mothers, and spread the word about why. A cow ribbon is a great way in to that much-needed dialogue.

Think About the Moms, and Their Babies

Kudos to Liberation B.C. for creating such a unique, eye-catching, and effective project — this should be inspiration to all of us activists with a  yearning to create effective campaigns. But beyond the Cow Ribbon Campaign, don’t forget about the other mother victims of animal exploitation. To name a couple: egg-laying hens, whose reproductive systems are manipulated in unfathomable ways, and who never experience the joys and natural behavior of chickens in the wild; and breeding dogs, who are usually confined for their entire lives in horrendous puppy mills — when countless other dogs are being killed in shelters because they are not being adopted.

And, of course, don’t forget that all farmed animals are killed as babies — not just veal cows. And all mother farmed animals have their babies taken away, not just dairy cows. Piglets, for example, are forcibly weened much sooner than they would be in nature. So are beef cattle. You simply cannot have animal agriculture without exploiting mother animals — or father animals, baby animals, and hell, even human animals.

We need to talk about this, and loudly. The animals of the world cannot remain out of sight and out of mind, suffering in silence. They need each of us to step up to the plate — on Mother’s Day, Father’s Day, and every other day — and say, “No! I will not support this!”

Despite my hard-New-Yorker exterior, moments like I had in the grocery store fill me with hope, and they remind me of the potential we each have to create change for animals simply by speaking up in a way that is genuine and nonjudgmental. It also reminds me of the power of grassroots activism, such as keeping a stack of vegan recipe guides in your bag at all times, starting conversations with those around you in the grocery store line, and wearing your cow ribbon. There is just no time for complacency or silence.