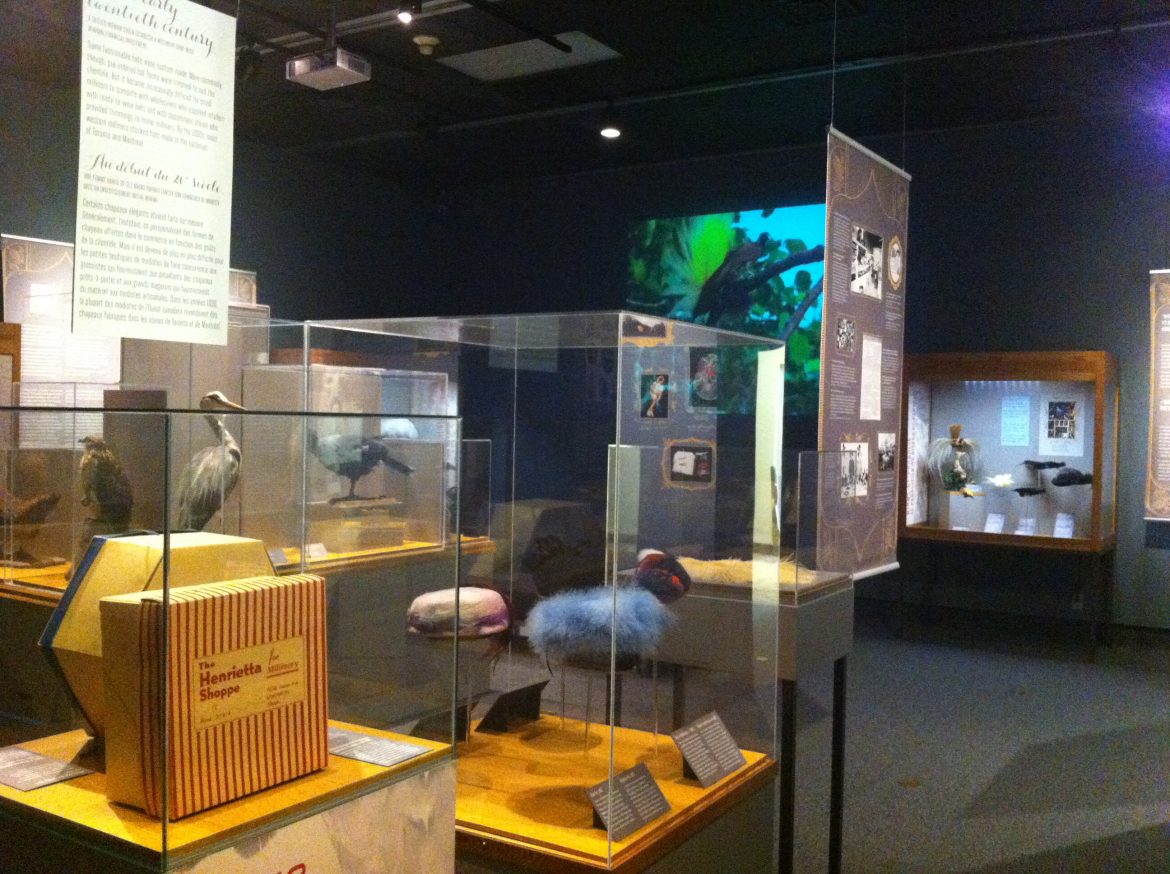 Recently, I have been thinking about the ways in which museums, galleries, and exhibitions can function as a space for activism. While these venues are often perceived to be “stuffy” and rather far removed from the politics of activism, in fact there is a wonderful history of these spaces being the site of political dialogue around social change. A thoughtfully curated show can ask viewers to see the world in a different light, to consider ideas and issues that they perhaps would not stop to think about, and to pay attention to ideas and issues that may otherwise be “culturally invisible.” A successful exhibition is one that provokes, challenges, and asks visitors to question their own assumptions and beliefs.
In recent years, a number of curators and artists have used exhibitions to raise questions about the role of animals in our society. Of course, it is important to point out that not all “animal themed” exhibitions function in this way (I recently attended an exhibition where the curatorial vision appeared to be celebrating animals as objects of hunting and fishing!); however, it is encouraging to see a growing number of exhibitions directly grappling with critical questions around how we engage with other species. 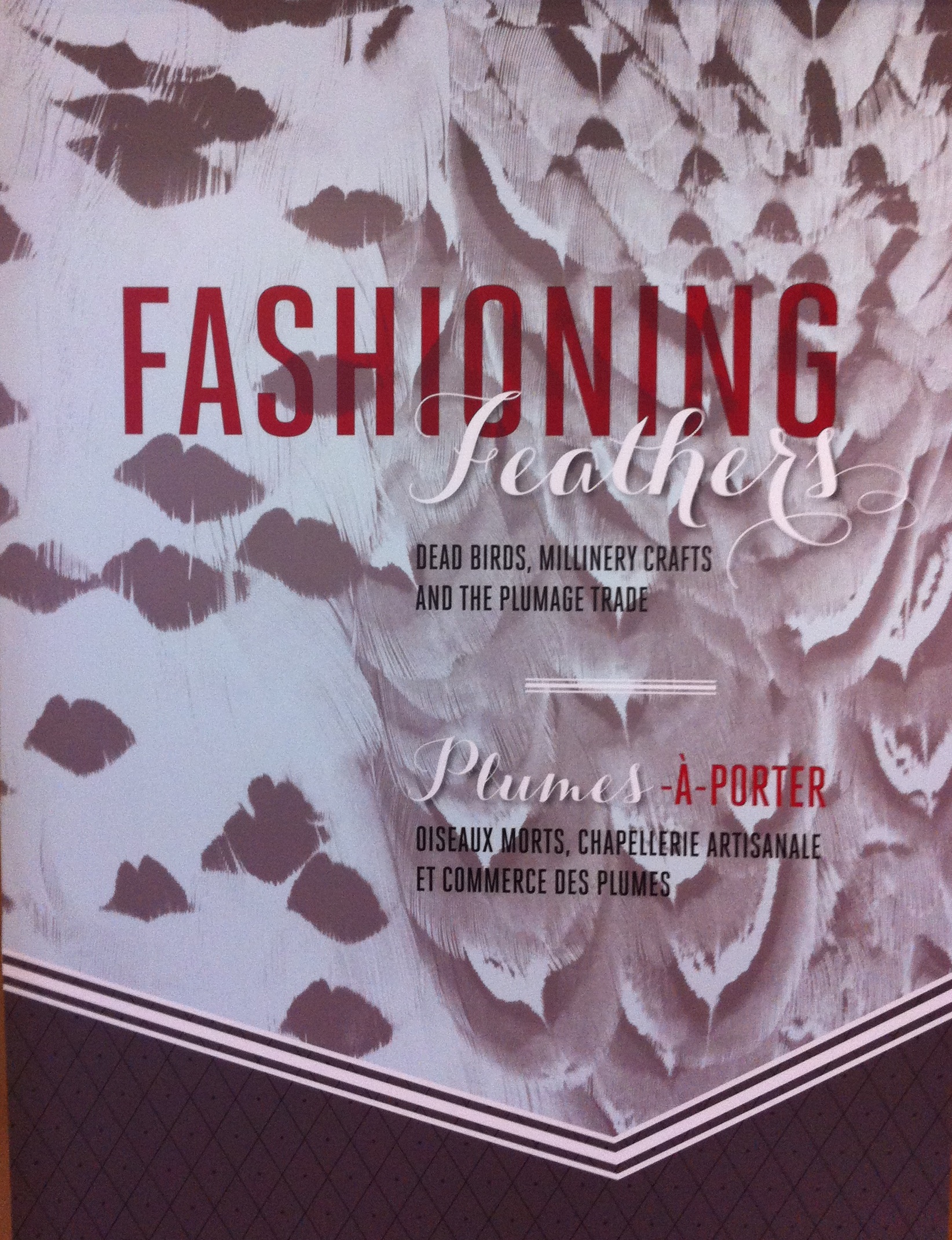 Two exhibitions I attended in the past year stand out as particularly important examples of this. The first was Anima, an exhibition of photographs by Charlotte Dumas at the Corcoran Gallery of Art in Washington, D.C. The second was an exhibition called Fashioning Feathers at the Royal Alberta Museum in Edmonton, Alberta, Canada. While the two exhibitions were very different in terms of themes and curatorial approaches, I found them to be comparable in that they invited viewers to see and think about animals differently.
Anima, which you might have heard about from Our Hen House, was an exhibition of photographs that Dumas made of the horses who are part of the funeral ceremonies that take place at the Arlington National Cemetery. While the solemn formality of these military funerals have been the subject of many photographs, Dumas chose to focus her camera specifically on the horses who are such an integral part of these ceremonies. She photographed these horses in their stables at night, away from the pageantry and work they are asked to do during the day. In the context of the military funerals, these animals are seen, but at the same time are rendered somewhat invisible, given that the specificity of each horse matters less in this context than the overall visual effect of having the horses incorporated into the ceremony. In contrast to this, Dumas chooses to show these horses resting in their stalls – here, they are individuals, and not merely part of the backdrop of a military ceremony. The close cropping coupled with the way in which the white bodies of the horses blend with the dark shadows of the stables quite literally asks the viewer to see these animals in a different light. These images are so very different from the ways in which horses have traditionally been portrayed in the history of art, and that is precisely the point. In Dumas’s work, these animals are not symbols of human achievements or attributes. Rather, these photographs force us to think about these specific animals as individuals. Dumas calls these images “portraits,” a term typically reserved for images of humans. The display of these portraits in the rotunda gallery of the Corcoran served to elevate the status of these animals within the walls of the gallery. This is not generic “animal art”; rather, this exhibition asked viewers to stop and see these specific horses in a new way. 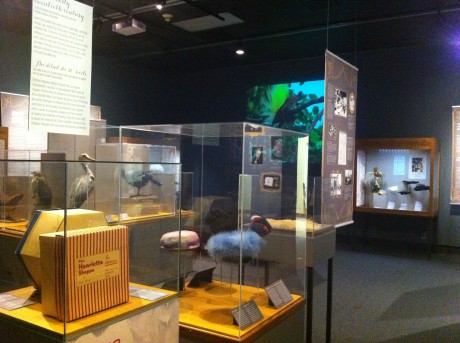 Fashioning Feathers, curated by Dr. Merle Patchett and Dr. Liz Gomez, focused on the late 19th- and early 20th-century trend for clothing adorned with feathers. As a vegan and an animal rights activist, I find the concept of wearing animal bodies and body parts deeply troubling, and when I was invited to view this exhibit, I hesitated. Once inside, however, I was reminded that activism and humane education do not – indeed cannot – follow a neatly prescribed pattern; there are many different ways to ask people to rethink their assumptions about the ways in which animals are treated by our society. In short, this exhibition surprised me, and I found it to be delightfully subversive given that it was situated in a natural history museum.
The sounds of the exhibit were the first thing I noticed – even before I made my way into the exhibition space, I heard two distinct, competing sounds drifting out from the installation. The first was the sound of birds chirping –  recordings from the Cornell Lab of Ornithology. The second was haunting, ethereal music that I later discovered was part of an art piece by Andrea Roe. This juxtaposition of sounds had an unsettling effect, one that set the tone for viewing this exhibition. Fashioning Feathers brought together historic fashion, taxidermic animal bodies, and contemporary art. This mix of past and present, and the combination of art, science, and fashion, created a provocative environment. Displays juxtaposed delicate-looking, once-fashionable hats with taxidermic specimens representative of the type of animal who was killed for the production of that specific hat. For example, a hat from the early 1950s that was adorned with guinea fowl feathers was placed alongside the body of a guinea fowl preserved for the ages through taxidermy. This placement of a luxury fashion item next to the body of a once-living animal made it impossible to deny the connection between the two. The “nature sounds” of birds chirping that permeated the gallery underscored both the absurdity and tragedy inherent in the fashion for animal body parts. Photographs, excerpts from catalogues, and textual accounts from millinery shops emphasized the staggering number of birds who were killed in the name of fashion. Roe’s video piece, Kingfisher (note: contains some disturbing imagery), focuses on the process of taxidermy and shows a bird’s body being “prepared” from start to finish as a museum specimen. This somewhat macabre video was difficult to watch, and yet, in this context, the images underscored the violence toward animals both in the name of science and in the name of fashion. The still, taxidermic specimens alone could not have captured this, but the combination of video, audio, hats, and stuffed animals had a haunting effect.
The choices the curators made were deliberately jarring, forcing viewers to make the uncomfortable connections about the ways in which animals are treated. As I walked through the exhibition, I overheard comments such as “I didn’t realize birds were killed for fashion; I thought the fashion industry just collected the feathers that naturally fell off.” People viewing the exhibition seemed to be horrified that this was not in fact the case, but contemporary viewers could be forgiven for making this assumption – at the height of the feather fashion craze, industry worked hard to make consumers believe that birds were not harmed. As the text panels for the exhibition noted,

This exhibition focused on a fashion trend from a previous era, and yet the inclusion of contemporary art and commentary makes the debate about the use of animal bodies – in science, in art, and in fashion – relevant for audiences in the 21st century. As I overheard someone in the gallery say to her friend, “You know that your leather shoes are made from animals, too, right?”
In both of these exhibitions, artistic and curatorial choices made explicitly visible aspects of human-animal relationships that often go unseen, unnoticed, or unconsidered. Neither of these exhibitions had an overtly animal rights-themed message, and, in many ways, I found that this actually contributed to their success. Those attending these exhibitions were not told what to think; rather, they were presented with new ways of considering animals. Both of these exhibitions made visible aspects of human-animal relationships that are frequently culturally invisible and, as such, served as important launching points for broader discussions.

Look Deeply Into My Eyes