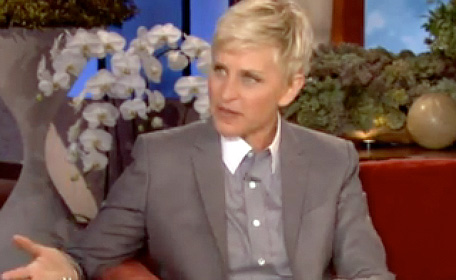 Dear Ellen,
Oh, Ellen… Our Ellen…
When you went vegan, and became an outspoken ambassador for animal rights, we kinda fell in love. We didn’t really want to be celebrity stalkers, and sheesh, we’ve sure had our hearts broken before by some big names — but with you, we just couldn’t help it. Let’s face it. We pretty much loved you already, and your awakening to what was going on with animals, and your willingness to speak up about it, was enough to make us swoon. It was enough to make us think, okay, things are going to happen now. We’ve got ELLEN on our side.  First you did it for us as dykes. Then you did it for us as vegans. No longer were we on the outside looking in — we had Ellen.
And you weren’t one of those friggin’ health vegans, either (no offense, Rosie). You were true blue for the animals. We were even publicly criticized for not attacking you when, despite your seemingly firm commitment to ending animal cruelty, you remained the spokesperson for Cover Girl — a company that continues to employ horrific animal testing methods. It was contractual, we surmised. Kind of like a rich and famous person’s version of not throwing away an old, leather belt. Her relationship with them needs to be phased out. Or maybe she’s working on the inside to turn things around! Ellen still does so much for animals; let’s not throw her under the bus when we might not have the full story.

So to other people, maybe your recent foray into animal exploitation doesn’t seem like much. Maybe it doesn’t seem inconsistent, given your previous blind spot. Maybe it doesn’t seem like anything at all. But when you casually mentioned on your show that you now eat eggs, because they come from your neighbor’s yard, and the chickens are surely “happy,” we gotta tell you, our hearts broke. (What’s next? Are you going to tell us you’re sleeping with men?)
We vegans are frequently accused of anthropomorphizing a bit too easily, so forgive us for assuming, but, in the first place, what makes you think that your bird neighbors are happy?
Do you think that the hatcheries where they were almost certainly born are happy places? In fact, the hatcheries where most people get their “backyard birds” are generally the same exact places as where factory farms get theirs. Where chicks are born in machines without ever seeing their mothers, and where male chicks are ground up alive because there’s no use for them.
Do you understand that chickens have been bred and cross-bred and over-bred to lay eggs, and way too many of them? So many eggs that they’re calcium-deprived?
Do you think that your neighbor who so generously gives you the eggs of these hens will take care of them once their egg production wanes, which can very easily leave her with a bunch of pet birds for years before they die? Or might she slaughter them? If your neighbor continues to keep backyard birds, she will wind up with dozens — or hundreds — of animals.
We’re wondering if you’re OK with the fact that, in areas where roosters are forbidden (which is most places that allow for backyard birds), the male chicks just wind up in the garbage, literally (just as they do with every single other type of egg production, commercial or otherwise)? How does that work where you are?
And speaking of the boys, do you realize that when people or stores order chicks from hatcheries, the boxes arrive with male chicks who were just put in there as packing material (who will then be killed, since roosters aren’t allowed)?
Maybe it’s not the case with your probably fabulously wealthy neighbor, but are you under the impression that everyone who keeps backyard birds gives them all the room they want, lets them perch in trees, lets them lay their eggs wherever seems good to them? Of course not. They need to be in coops, so people can take their eggs from them. Sometimes those coops are really, really small. And they have to be protected from predators, since just by having chickens, we humans are subjecting them to dangers.
But let’s say you, or someone on your staff, actually did all your research, and know all of this. Let’s pretend that this neighbor of yours is as good for chickens as one can get. Our question is, so what? Are you trying to act out your own rich person’s food fantasy, or are you trying to change the world? It is obviously impossible for everyone to keep hens, or to even have a backyard, so what are you really saying here? That it’s OK for you to not be vegan, because you can afford “happy” hens? But the rest of those poor schmucks will just have to suffer without?
And that brings us to the crux of the matter. Because the thing that really breaks our hearts is not just that you gave in to your desire to eat eggs, but that you even thought you had such a desire in the first place. For us, and we thought for you, being vegan is actually what we want to be. It’s not second best. It’s not giving up things. Vegan is abundance, it’s compassion, it’s the future, and it’s delicious. As far as we’re concerned, being vegan is the very best part of us. We are so not looking for an excuse to go back to eating animals, or even the reproductive byproducts of animals (seriously, yuck!). And we thought you felt the same. We thought you had joined us on our journey to not just embracing a new way of eating, but a new way of living in the world, a way to truly understand what it means to be “happy,” both for the animals, and for ourselves. In fact, we thought you had embraced your role as a leader of this movement.
So perhaps some people might say “it’s just a few eggs,” and others would say “there’s no reason to make a big deal of it.” No way. It’s a very, very big deal. But we’re not giving up yet. We really hope this is just a bump in the road, and that we’re not breaking up. Please come back…
For the animals,
Jasmin Singer & Mariann Sullivan

SUBJECT to Change: Video Art That Will Change Your Perspective