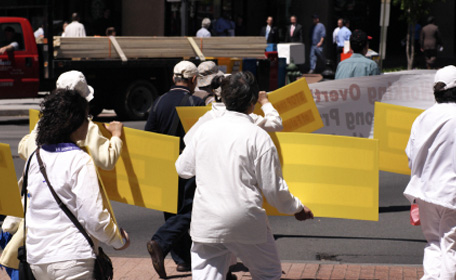 Tired of your usual activism endeavors? Bored of leafleting? Cringing at the notion of making one more vegan dish to bring to a non-vegan potluck? Nick Lacetti swoops in to spice up your advocacy on this #ThrowbackThursday! His answer? Introduce some theatrics into the mix.
This article originally appeared on Our Hen House on May 4, 2011. If you’d like to see a certain OHH article resurrected, email us at info [at] ourhenhouse [dot] org.
***
I have something to confess that won’t make anyone happy: I can’t stand Glee. I think it’s one of of the most cringeworthy things ever to be on TV, yet I’ve seen almost every episode. I don’t know why. Maybe I’m just obsessed with Santana and Brittany (when are they going to get together? When?! [EDITOR’S NOTE: They may have finally gotten together…but I don’t know…this editor has never seen an episode of Glee…). I admit this so I can explain why I know that one episode of Glee, the one with the Lady Gaga songs, was called “Theatricality” and centered around the idea that performances need to be theatrical, need to catch the eye and hold the audience’s interest. 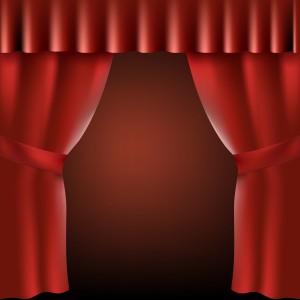 Put on a show.

This idea of theatricality was handled in a ridiculous manner by Glee, as always, but the show did have a point. Demonstrations and protests are mainstays of the animal rights movement, with good reason. They can bring animal rights issues and veganism to the public in an in-your-face way, while putting pressure on those who would profit from animal exploitation. Even with all the creative and new media activism we love to highlight here at Our Hen House, attending a traditional demonstration is always good to fire up the blood and get yourself out on the street in the service of the animals.
But our demonstrations and protests are counterproductive if they lack that spark of the theatrical. If there is nothing to bring in a crowd of onlookers, nothing to draw the eye, demonstrations can get lost in the busyness of a city’s daily activities. If you have smaller numbers, adding a theatrical edge to your event is also a great way to seem larger than you actually are.
Of course you need to remember that the bigger you get, the better you have to be at pulling off the theatricality factor. Nobody wants to be watching — or, worse, be participating in — an unintentionally corny, embarrassing theatrical demonstration, especially when an animal cause is the issue at hand. One successful example of theatrical activism that Jasmin never stops talking about is the flashmob “Bad Hotel,” in which LGBT activists stormed San Francisco’s Westin St. Francis, singing the “Bad Hotel” version of Lady GaGa’s “Bad Romance,” drawing attention to a boycott by hotel workers who are attempting to get a fair contract and health care.
Another positive example of theatricality (sans the social justice theme, however) that I fancy is Improv Everywhere, the hilarious NYC-based group responsible for events like the annual No Pants Subway Ride. Improv Everywhere knows how to take an idea and run with it in a way that is as engaging as watching a Broadway musical — possibly because they sometimes stage flash-mob style musicals in malls or on the street. PETA is also famous for its controversial, attention-getting demonstrations that raise awareness about animal issues through high concept protests [EDITOR’S NOTE: Have you heard our recent interview with PETA founder Ingrid Newkirk?]
[EDITOR’S NOTE: The following paragraph has been altered with italics and strikethroughs to reflect the time passed since the original article was written.] Since we’re on the topic of theatrical demonstrations, there [was] an event in New York City that everyone who is interested in using theatricality to advocate for the animals should check out [retroactively]. Our Planet. Theirs Too. [was] a rally held in Union Square on June 5, [2011], which [included] a “requiem ceremony” for the animals. According to the website, Our Planet “[commemorated] the billions of animals who endlessly suffer and die at the hands of humanity,” in a ceremony reminiscent of the creative demonstrations held by Spanish animal rights organization Igualdad Animal. Following the ceremony, there [were] educational displays and other attractions sponsored by various NYC animal rights groups.
So take Will Shuster’s advice (I hope, for your sake, that you don’t get that reference) and add an element of theatricality to your demonstrations. Not only will you be doing more to raise awareness of the plight of non-human animals, you and your audience will have more fun in the process — if fun is what you’re going for. You could also bring them to tears, fill them with rage at animal exploitation, or move them to really think about humanity’s use of animals. With a theatrical demonstration, the whole range of emotions is available to you.
Disclaimer: Please note that in this instance, the views expressed by Nick Laccetti regarding Glee are not even remotely representative of Our Hen House. While other members of the Our Hen House team vehemently agree with him regarding the theatricality of street theatre, they strongly believe that Mr. Laccetti is clearly on a dangerous path when it comes to his appreciation of campy, high school drama television musicals, like Glee. Please rest assured that they intend to intervene and help Mr. Laccetti find his way. [EDITOR’S NOTE: This intervention has not yet been successful…]
Share 0 FacebookTwitterPinterestEmail
previous post