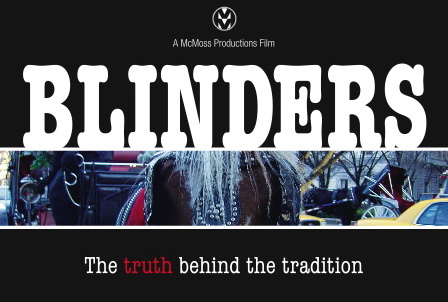 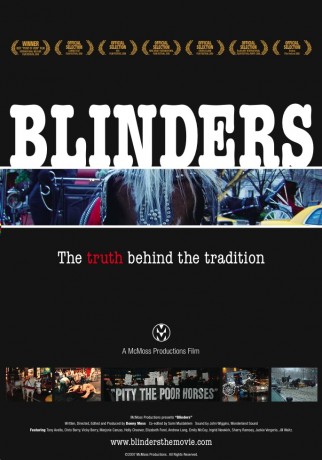 Nothing like a new addition to Amazon to breathe new life into a documentary that everyone should make sure they see and make sure they share. I’m talking about Blinders, the film that goes behind the scenes into the true story of the NYC carriage horse industry and the passionate movement to ban it, by filmmaker Donny Moss (who, lucky for us, is on the Our Hen House Advisory Board). Blinders — which was the recipient of a Genesis Award for “Best TV Documentary” as well the recipient of the title “Best Documentary” at the International Wildlife Film Festival — is now available for rent or purchase on Amazon.
We all know the changemaking power inherent in film, especially when it comes to changing the world for animals. Undercover investigations and exposés bring home the truth even to those in the most stubborn denial. You can’t disprove what is caught on tape. Blinders effectively exposes the hideous horse-drawn carriage industry, and is a perfect example how we can each bring attention to animal issues — even if all we have is a “Flipcam and a Dream.” And if you yourself are not up to speed on your talking points about this antiquated and unnecessary industry, well, watch the film.
It should be noted that Donny Moss was not a filmmaker prior to making this movie — just as Marisa Miller Wolfson of Vegucated was not one, either. (Similarly, prior to starting the Our Hen House podcast, I barely even knew what a podcast was, let alone how to produce one. I literally bought Podcasting for Dummies, and 187 episodes later, the rest is history.) My point is that Donny is a perfect example of turning a passion into an invaluable resource that will open eyes and hopefully change the world. I venture to guess that he has never in his life begun a sentence with “Someone should really do something about …” Instead, he did it himself.
For now, watch Blinders, and share it with those in your life who purport to care about animals. Remember, animal issues that are not centered around farmed animals — such as issues involving horses — can be a great way in as far as getting folks involved, encouraging them to connect the dots, and then emboldening them to change the world for all animals.

Mom Looks After Her Kits