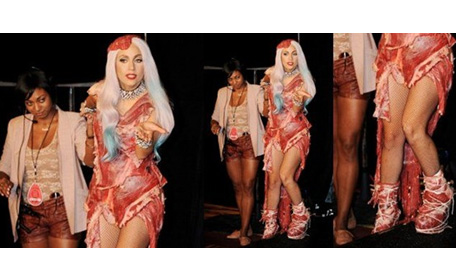 You probably know by now that Lady GaGa showed up at the MTV Video Music Awards wearing a dress made entirely of real meat. I’ve seen this horrifying story shared amongst animal activists literally hundreds of times on Facebook and Twitter. The comments under the shared articles have been ample. I’d venture to guess there have been thousands (more?) of comments about how Lady GaGa really crossed the line, and how there’s nothing sexy about donning the carcasses of dead animals. Tons of people “like” these comments, and we are justified in our disgust (obviously). When one asshole who I haven’t seen since high school commented on my Facebook page that he would’ve eaten her, I un-friended him. Take that, oppressor. 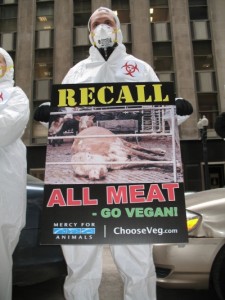 But when I heard that Nathan Runkle, Executive Director of Mercy for Animals, addressed the situation with an open letter to Lady Gag-Gag, I thought, well there ya go. Nathan took a situation where one of the most famous people in the world has attracted serious media attention, and he turned it into an opportunity for activism. Rather than just perseverating to his peers (which, you know I’m all for, as long as opportunities for change and enlightenment are not missed in the process), Nathan clearly and cleverly compiled his thoughts.

Another person who took this travesty and turned it into activism is Huffington Post columnist (and Our Hen House advisory board member) Ari Solomon. In his recent HuffPo article, “Going Gaga Over Meat,” Ari brought his keen observations to the mainstream, going beyond the choir:

“I’m absolutely fascinated by the public’s disgusted reaction to Lady Gaga’s meat dress. If she had come on stage clad in “leather” no one would have given it a second thought. Umm… what do we think leather is peeps? Hello, it’s meat.”

Nathan and Ari certainly reminded me that though eye-rolling amongst peers has its place, we are trying to change the world for animals, and in order to do so, we have got to step it up and seize every activist opportunity we can — particularly when it can be applied to big media stories like this one. And it’s not just for animal rights organizations to do this kind of outreach; each of us needs to take responsibility and take a stand. Writers can put together letters to the editor (here’s some tips on how). And even if you’re not a writer, conversations around the water cooler at work have been known to change minds and open eyes.

Furthermore, should the opportunity ever arise for me to ever attend a big Hollywood award ceremony, you can bet I’ll be donned in nothing but tofu.