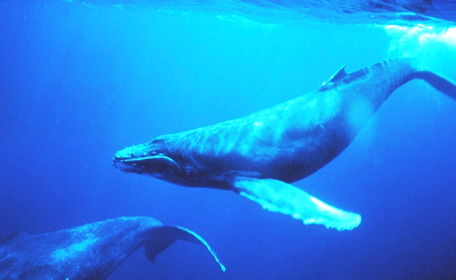 Whales have been getting some much-needed attention recently, which we can likely attribute to the big publicity that Sea Shepherd Conservation Society has received with its television hit, Whale Wars. Celebrities like Sean Penn and Linda Blair are avid supporters of the Sea Shepherd, and Bob Barker recently donated 5 million dollars to their efforts.

Barrymore and Krasinski; Photo from FirstShowing.net

Drew Barrymore has recently joined the “save the whales” bandwagon. She is set to star in a new movie, alongside John Krasinski, entitled Whales. The original name was reported to be Everybody Loves Whales.

According to FirstShowing.net, the film “tells the real-life story of three gray whales trapped in the Arctic ice off Barrow, Alaska in 1988 who were rescued in an international effort involving icebreaker ships from both the US and USSR all during the tense times of the infamous Cold War.”

In this touchy-feely film — which I personally can’t wait for — Krasinski plays a reporter, and Barrymore plays a Greenpeace activist. (You might remember that Paul Watson, Captain of the Sea Shepherd, actually co-founded Greenpeace — though the two organizations have since angrily gone their separate ways).

Now if Hollywood would just make a movie called Chickens, starring Ellen DeGeneres. That will be a happy, happy day …