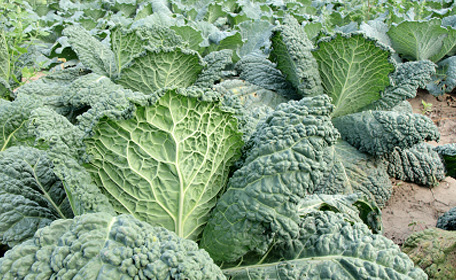 There’s a t-shirt maker up in Vermont who has done just that. Just by making his incredibly popular t-shirts bearing what anyone would think of as the virtuous, and utterly uncontroversial, slogan, “Eat More Kale,” Bo Muller-Moore has managed to get some folks in the chicken torturing business to make total fools of themselves. Nice work!

The marketing whizzes at Chick-fil-A (which, I want to take a minute to note, is an incredibly bad product name — are they trying to misspell “filet”? Is it some kind of play on words? I don’t get it) are, of course, known for their particularly offensive series of commercials in which cartoon cows use signs to encourage people to “eat mor chikin.” Get it? Isn’t that hilarious?!? You see, if you eat more chicken, you won’t be eating beef, and so cows will be spared some of the torture and hideous deaths you’re going to bestow on chickens instead. Ha! And the other thing that’s really funny is that cows are so stupid that they don’t know how to spell! Wow, I am laughing so hard my sides are splitting! This is apparently what passes for humor in the utterly sick world of selling people death. One can only imagine the amount of denial that one must have to enter into about what meat really is in order to find amusement in this travesty.

But, I digress…. My focus today isn’t the severe psychological dysfunction that underlies the “humor” in the Chick-fil-A ad campaign. It’s the fact that the folks who run that charming company seem to think they now have the prerogative to prohibit anyone else from telling people to “eat more” of anything other than chicken and have threatened to sue Muller-Moore if he does not stop selling his shirts and turn over his website to Chick-fil-A. No, I am not kidding. Of course, the whole purpose behind trademark laws is to prevent people from confusing one brand with another, thus giving the interloper a free ride on a well-established brand that someone has spent time and money on. So, apparently Chick-fil-A’s lawyers think that people are running to buy “Eat More Kale” shirts from some guy in Vermont because of the incredibly offensive ad campaign depicting cows telling people to” eat mor chikin.” Crazy, right? But apparently they have, with their fancy cease-and-desist letters, scared many other businesses into not encouraging people to eat more whatever. 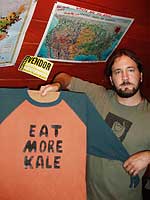 Happily, unlike those other victims of corporate lawyer threats, our trusty Vermont t-shirter is not rolling over. It kind of reminds me of the David and Goliath tale of the McLibel case, where the geniuses who run McDonald’s made fools of themselves trying to sue two English activists who had handed out flyers claiming, among many other things, that McDonald’s was culpable for animal cruelty. If you want to learn the very entertaining story of how that turned out for Mickey D (not well, I can assure you), you should check out the excellent documentary made about that case, which you can watch online for a fee, or you can get from Netflix.

If you are interested in supporting Muller-Moore, you can, of course, buy a t-shirt online. Fair warning — unfortunately, he also sells “Cheese” t-shirts and it appears to be referring to dairy-derived cheese. I wish we could think of a way to sue him for that!