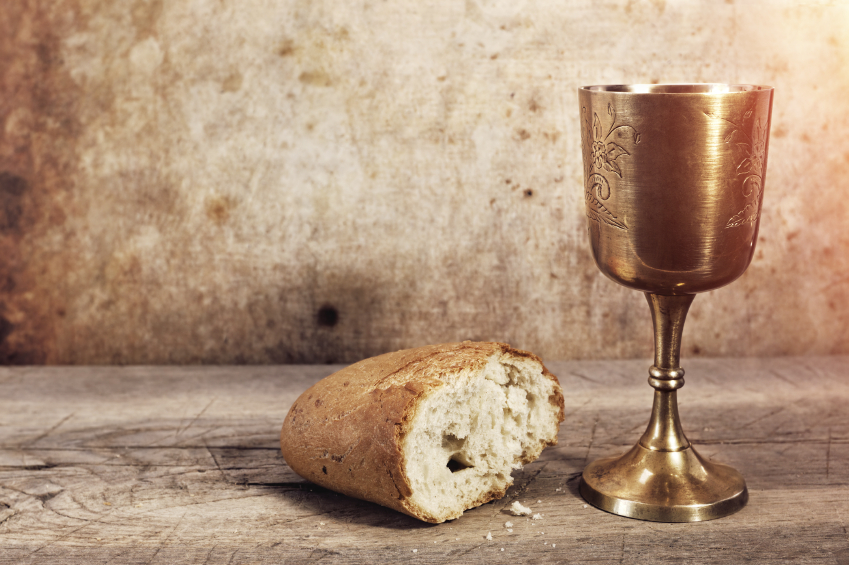 Once again we bring you the work of Lauren Lisa Ng – an ordained minister, blogger and dedicated community activist. Her suggestion that the act of eating can be seen as sacramental has profound repercussions for the Church and the choices Christians are making everyday.
***
Eating Our Way to Heaven: Food as Sacrament
by Lauren Lisa Ng
It might sound grisly to some, but for as long as I can remember I’ve been comfortable with the idea of eating a body and drinking blood. 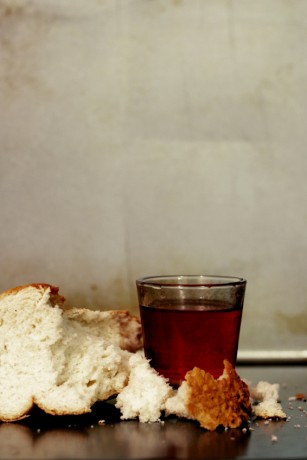 I was born into a Christian family in 1978 and spent my childhood running down the aisles of the sanctuary, napping in the pews and banging on the keys of the organ in a small Baptist church in suburban Pennsylvania. We had worship service every week. We had Sunday School classes to learn about the Bible. We took up a weekly offering to meet the needs of our community. We had potlucks, yard sales, and hymn sings. And on the first Sunday of the month, we ate the body of Jesus and drank a cup of his blood.
Scripture tells of Jesus sitting with his disciples for the Passover meal in Jerusalem – his final documented meal before he would be crucified on the cross. In what we now call Communion (or the Lord’s Supper or Eucharist, according to different Christian faith traditions), Jesus broke bread for his disciples to eat, calling it his body, and then poured wine for them to drink, calling it his blood. In so doing, he called attention to the bodily sacrifice he would make on their behalf (“this is my body, broken for you”), and the salvific power contained therein, through the shedding of his blood (“this is my blood of the new covenant, poured out for you.”).
Following Jesus’ death and resurrection, the early Church began to celebrate the Communion meal both as a time of remembering Christ’s sacrifice and participating in the vision of God’s kingdom to come. It was a time to gather around the table, offer thanks to God over a common meal, and enjoy a foretaste of heaven.
We still do this today, albeit in different forms. Many contemporary churches celebrate Communion once a month rather than every day, and we tend to partake of a small portion of bread and wine (or grape juice) rather than share in a bounteous meal together. We call this ritual of Communion a sacrament of the church, sacrament being defined as “an outward and visible sign of an inward and invisible grace.” Therefore, when we celebrate Communion, we consume the bread and cup as symbols of Christ’s saving and redeeming grace in our lives.
But to see the bread and cup as only symbolic is to ignore God’s divinity manifest in these elements. Every interaction we have with creation is in fact an interaction with the Creator. We see glimpses of God in the faces of those around us. We sense God’s presence in the astounding beauty of the natural world. And yes, we witness God’s creativity in the seeds, vines, human hands, and technology from which our bread and cup arrive at our Communion table month after month. Is this journey from seed to table simply an example of the agricultural assembly line or might it be viewed as an act of grace?
Christians may agree that Communion is sacramental, but we part ways when it comes to our daily meals, snacks and drive-thru binges. However, in Food & Faith: A Theology of Eating, Norman Wirzba, Research Professor of Theology, Ecology and Rural Life at Duke Divinity School writes:
Created life is God’s love made tastable and given for the good of another. The mundane act of eating is thus a daily invitation to move responsibly and gratefully within this given life. It is a summons to commune with the divine Life that is presupposed and made manifest in every bite.
I believe each morsel that passes through our lips should be examined under the lens of sacrament. Every meal should be seen as an intimate encounter with our Creator. Every opportunity to eat is an opportunity to commune with Christ, to abide in him and invite him to abide in us.
But this will require a new way of approaching food, in particular, food that comes from animals – meat, seafood, dairy, and eggs. If we see our interactions with food as sacramental – as pointing to the grace of Christ and to the reconciliation of all creation to him – then we must make intentional, thoughtful food choices. Our choices should reflect not the brokenness of our present world, but the wholeness of God’s kingdom to come. We should literally be eating our way to heaven with each informed and deliberate bite. My pastor recently preached a prophetic word that could be applied to this issue. He said, “to the extent we can be what we will be, we should be.”
What we will be when God’s kingdom comes on earth are a people of peace, not a people who commit acts of horrific violence against sentient animals to satisfy our palates and lust for profit. What we will be are a people of freedom, not a people who utilize battery cages, gestation crates, hooks and chains. What we will be are a people of true Communion with all creation, not a people who draw arbitrary lines down our interstates and dinner plates, placing a higher value on the life God breathed into us over the life God breathed into them. 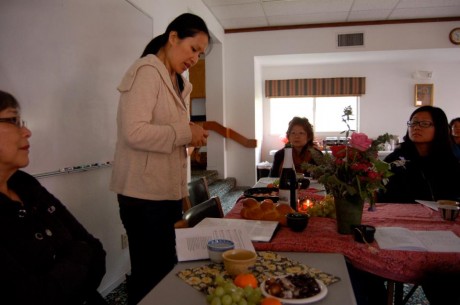 I recently attended a gathering of Christian leaders that culminated in a Communion celebration. As I walked into the room I quickly surveyed the table. The familiar little plastic cups filled with grape juice were laid out in a beautiful array. But instead of the usual cubed pieces of sourdough bread, there were croissants. Buttery, flaky croissants. I panicked. How would I participate in this transformative, communal experience while remaining true to my convictions as a vegan? How would I stand firm in my beliefs without coming across as judgmental to my colleagues? I prayed to God to come to my rescue and took my seat among a small group of people. Each group was then invited to send someone forward to collect the Communion elements and bring them back to their circle. Next, we would take turns offering the bread and the cup to one another. I realized there was no getting out of this one.
And so I stood up to gather the elements to bring back to my group. Upon returning, I explained to my sisters and brothers that my convictions prevented me from partaking of the croissant as a symbol of Christ’s body, but that it was my honor to offer it to them. Everyone looked confused for a moment, then sympathetic. Suddenly, one of the women leapt from her seat and said, “Hold on! One second, okay?” She ran off toward the kitchen and a moment later returned with her arm outstretched, an Oreo cookie in the palm of her hand.
“Oreos are vegan, right?” she asked excitedly. “That’s what you told me yesterday. They’re vegan!” I smiled and vigorously nodded my head, almost wanting to cry. My friend then looked me in the eye as I took the Oreo from her hand and said to me, “This is the body of Christ, broken for you.”
An outward and visible sign of an inward and invisible grace. I tasted the sacrament of life in that moment. I invite the Christian Church and any who believe in the sacramental nature of this living creation of which we are each a part, to pull up a seat and join me.
*** 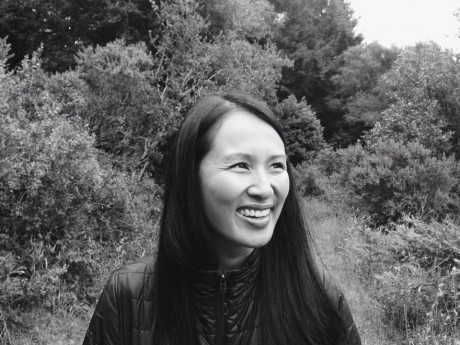 The Rev. Lauren Lisa Ng earned her Masters of Divinity from the American Baptist seminary of the West/Graduate Theological Union in Berkeley, CA, completing her Masters thesis on the topic of Animal Theology: A Christian Theology of Compassion For Animals. She was ordained as a Minister of the Christian Gospel with the American Baptist Churches, USA in 2005. Lauren serves on the Board of Directors for the American Baptist Home Missions Societies, on the Board of Trustees for Bacone College in Muskogee, OK, and on the Advisory Team for American Baptist Women in Ministry. She’s been married to her husband Daniel for 13 years, and together they have three children, ages 8, 6, and 3. Lauren is also the blogger behind One Happy Table, a vegan recipe blog. Her article“The Church Potluck, Reimagined” was published by Our Hen House in July, 2014.