Move Over, Harry Potter; a Memoirist Has Been Born! w/Evanna Lynch 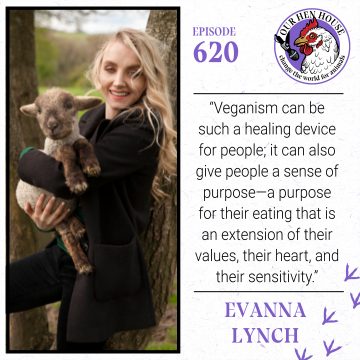 Wow! We are truly over the moon to be joined this week by the incredibly talented actress and activist, Evanna Lynch, who you undoubtedly recognize from her role as Luna Lovegood in the Harry Potter films. Yup, you read that right! A passionate vegan animal rights advocate, Evanna joins Jasmin for a thought-provoking conversation that ranges from advocacy approaches, to overcoming challenges through self-reflection, to the power of personal narrative, to her personal history with disordered eating, and so much more. In discussing her recently released memoir The Opposite of Butterfly Hunting, Evanna gets personal, opening up about her inspiration to write a book that shifts the narrative regarding eating disorders from the physical aspects to the existential pain of the disease. She also shares the scoop about her podcast, ChickPeeps, and how it showcases vegan living in an uplifting way.

Evanna Lynch made her film debut in Harry Potter and the Order of the Phoenix and reprised her role in subsequent sequels to critical praise, concluding with Harry Potter and the Deathly Hallows – Part 2. As an activist, she advocates for veganism and animal rights and has launched both a vegan-themed podcast and the cruelty-free cosmetics brand, Kinder Beauty. Evanna’s new memoir, The Opposite of Butterfly Hunting, reveals how she overcame a life-threatening eating disorder, began to conquer her self-hate, and confronted her fear of leaving girlhood for the unpredictable journey of being a woman.

“Veganism can be such a healing device for people; it can also give people a sense of purpose—a purpose for their eating that is an extension of their values, their heart, and their sensitivity.” – Evanna Lynch

Animal Law Podcast #78: The Case of Happy, an Elephant

Episode 14 of the Our Hen House TV Show is Now Viewable...

Episode 511: Stephen Wells on the Evolution of Animal Law