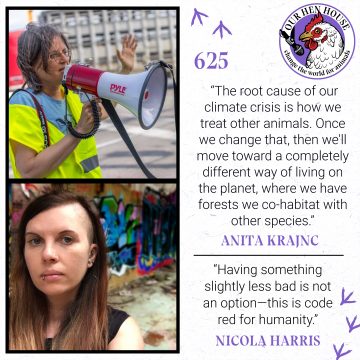 We’re so honored to welcome Anita Krajnc and Nicola Harris to help us start off 2022 with dynamic and effective activism for animals and the planet! Anita is the co-founder of Animal Save Movement and Nicola serves as the nonprofit’s Director of Communications. They talk about their decision to establish climate- and health-focused chapters of Animal Save Movement, in addition to the animal rights chapter, in order to connect with a larger audience. They also share why, as part of the climate chapter, Animal Save Movement has launched the Plant Based Treaty, an international movement fighting for a treaty that will center food systems in the fight against climate change. They also tell us how they are currently working to gather grassroots support from communities around the globe so that, ultimately, the treaty can be positioned as a companion to the Paris Agreement. They also share with us their related efforts to end animal-gifting programs that provide communities in developing nations around the world with farmed animals.

Anita Krajnc co-founded Animal Save Movement with the mission of spreading the idea that we all have a moral duty to bear witness, end animal agriculture, and reforest the earth. Animal Save Movement first launched in December 2010. Toronto Pig Save came soon after, after Anita adopted her dog, Mr. Bean. Anita Krajnc is a co-founder of Toronto Pig Save. She holds a PhD in Political Science from the University of Toronto and her doctoral thesis was based on the role of scientific knowledge and public education in building international environmental regimes.

Nicola Harris is a communications director at Animal Save Movement. She became a vegan activist and Stop Huntingdon Animal Cruelty (SHAC) campaigner in 2002. When she took on the role of communications in 2007, Nicola became a victim of state repression and, alongside other campaigners, received a prison sentence for her activism under controversial and undemocratic legislation targeting freedom of expression. Nicola is currently a core participant in a UK Government inquiry into the policing of protests and is listed in the miscarriage of justice category.

“Having something slightly less bad is not an option—this is code red for humanity.” —Nicola Harris

“The root cause of our climate crisis is how we treat other animals. Once we change that, then we’ll move toward a completely different way of living on the planet, where we have forests we co-habitat with other species.” – Anita Krajnc

Episode 172: “In matters of conscience, the law of the majority has...