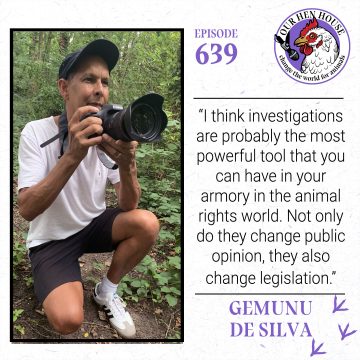 The trailblazing Gemunu De Silva, a United Kingdom-based undercover investigator of animal exploitation, joins us this week on Our Hen House. Gem, one of the first and longest-serving investigators of the worldwide hidden mistreatment of animals, tell us about his path into the world of animal activism and the animal rights movement. It was his very first factory farm investigation in the 1980s that not only horrified him but, fortunately, inspired him to devote his life to helping to amplify unheard voices.  After years of international investigations, he founded Tracks Investigations, an investigation agency working to support the important work of animal protection organizations around the globe. Plus, Gem highlights the impact and influence of investigative filmmaking on legislation.

Gemunu De Silva is a filmmaker and activist who has been investigating and documenting animal rights abuses since the 1980s. He was the first person in the UK to film inside industrial farms and expose the atrocities within. In the early 1990s, he went on to direct and produce a number of documentaries for UK national television relating to animal issues. Gemunu’s path led him to establish and operate the Investigations Unit at Compassion in World Farming. In the early 2000s, he went to work as the Director of Research and Investigations at Cruelty Free International, where he specialized in exposing the vile international trade in primates for research. In 2006, Gemunu co-founded Tracks Investigations, an ethical investigation agency undertaking projects for animal protection groups around the globe. To date, Tracks have completed over 260 investigative film projects for 38 animal rights and protection organizations in 58 countries.

“I think investigations are probably the most powerful tool that you can have in your armory in the animal rights world. Not only do they change public opinion, they also change legislation.” – Gemunu De Silva

This episode is brought to you in part by Meow Meow Tweet. Meow Meow Tweet creates vegan personal care for every body. Always ethical, low-waste, handmade & cruelty-free. They are also not only a Certified B Corp, but also certified plastic negative, climate neutral and leaping bunny certified. Right now Meow Meow Tweet is offering a discount for our listeners only! You can save 20% by visiting their website and using the code HENHOUSE at check out.

Episode 98: “…find the common ground that will bring us together in...