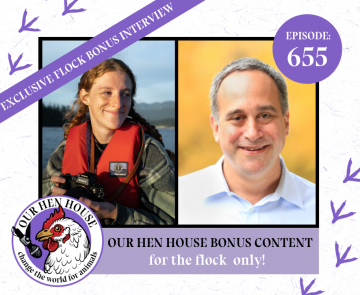 Join us for this week’s bonus clip from episode 655 where we discussed the upcoming documentary Coextinction with Gloria Pancrazi and Michael Bronner. Listen in as Gloria tells us about being influenced by other documentary films such as Blackfish, Michael clues us in to Dr. Bronner’s support of marine permaculture and they discuss the role of climate change in the survival of the orcas.

Let us know what you think about recent episodes, guests and content, or share ideas for what you’d love to see in upcoming episodes over on the  flock Facebook group.

Thank you so much for being a member of our beloved flock. We are so grateful to have you on our team as we all work to change the world for animals.