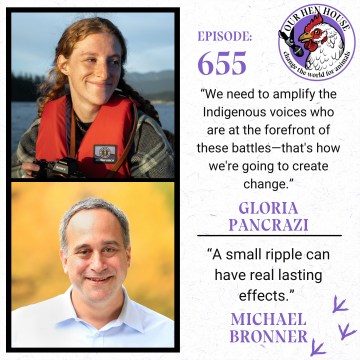 Documentary filmmaker Gloria Pancrazi and Michael Bronner of Dr. Bronner’s join us this week for a conversation about the recent film, Coextinction. We discuss the stars of the film: the Southern Resident Orcas of the Pacific Northwest who are currently facing extinction and the salmon, whose brutal exploitation is contributing to the to the starvation of the orca and other wildlife.  As this film, and its title, make clear, the disappearance of the orca isn’t an isolated issue; it’s one facet of a complex, crumbling interconnected system linking ecosystem collapse, injustice against Indigenous peoples, and the most urgent environmental threats of our time. Plus, Michael explains why Dr. Bronner’s felt that Coextinction was such an important film to fund and describes his role in the project and in the wider world of animal activism. The pair also discuss why it is so important to emphasize the critical role that Indigenous people play in teaching the rest of us how to live in harmony with the Earth.

*We are thrilled to expand the accessibility of our podcast by offering written transcripts of the interviews! Click here to read Mariann’s interview with Michael Bronner & Gloria Pancrazi.*

Gloria Pancrazi is an award-winning documentary filmmaker, writer, and impact campaigner. Her work focuses on telling heartfelt stories of healing and resilience for environmental and social justice. Her first love are the orcas, a guiding light that led her to the Pacific Northwest to help protect them. Her first feature film, Coextinction, was screened at Vancouver International Film Festival, Santa Barbara International Film Festival, and more. Gloria has spent 500+ hours monitoring the critically endangered Southern Resident orcas, Northern Resident orcas, humpback whales, and other marine life with organizations like OrcaLab and Cetus Research & Conservation Society. ​She has spearheaded impact campaigns like the March 4 The Dams, a 320km walk from Portland to the Snake River Dams, to bring global attention to the controversial dams pushing orcas and salmon to extinction, violating Tribal Treaty rights, and contributing to the climate crisis.

Michael Bronner is President of Dr. Bronner’s, the top-selling natural brand of soaps in North America and producer of other organic body care and food products. He is a grandson of the company founder, Emanuel Bronner, and a fifth-generation soapmaker. A philanthropist, activist, and active community leader, Michael is an advocate for many social and environmental justice causes advanced by the company, including Fair Trade, organic standards, animal advocacy, and ocean conservation. He currently sits on the San Diego District Export Council, where he counsels businesses on export processes, commerce, and education and advises per his expertise in international trade. He was born in Los Angeles, CA, in 1975. He lives in Carlsbad, CA, with his wife Erin and their children Eli and Alora.

“We need to amplify the Indigenous voices who are at the forefront of these battles—that’s how we’re going to create change.” – Gloria Pancrazi

“A small ripple can have real lasting effects.” – Michael Bronner