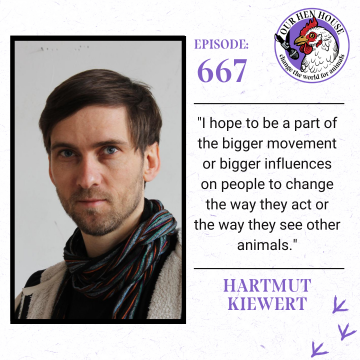 Imagine a world where cows, chickens, pigs and humans not only coexist, but live and flourish amongst each other within the same communities. For vegan artist Hartmut Kiewert, this is the definition of utopia, and he joins us on the podcast this week for a conversation about his truly unique artwork. Hartmut’s Animal Utopia series, which depicts animals and humans thriving alongside one another in urban spaces, is the artist’s vision for the next step toward an ideal, vegan world.  In the midst of a worsening climate crisis and horrific animal agriculture industry, Hartmut tells us why he believes it’s crucial to show people what life on Earth could be and why he’s committed to doing so through his work. Hartmut also discusses why so many artists struggle with authentically depicting and exploring animal rights issues and why he feels the next generation will help shape the conversation on human/animal relations.

*We are thrilled to expand the accessibility of our podcast by offering written transcripts of the interviews! Click here to read Jasmin’s interview with Hartmut Kiewert.*

German-born Hartmut Kiewert studied painting and graphic arts at the Burg Giebichenstein Academy of Art in Halle (Saale) from 2003 to 2010, graduating in 2010 “with distinction.” From 2007 to 2009, he was a German National Academic Foundation scholarship holder. Since 2008, Kiewert has been dealing with the social human-animal relationship. His paintings open up counter-images to today’s human-animal relationship, which is characterized by exploitation and repression. Perspectives of an equal coexistence of humans and other animals are anticipated. In addition to many solo exhibitions, Kiewert’s works have been shown in exhibitions such as ANIMAL TRANSITION (Städtische Galerie Ehingen), FoodFuturesART (Kunsthalle Faust, Hannover), ArtGenossen – Das Tier und wir (Städtische Galerie Fähre, Bad Saulgau), ANIMAL LOVERS (ngbk, Berlin), “we, animals” (Meinblau, Berlin), and “HABITAT – Wem gehört der Raum?” (Galerie KUB, Leipzig). Hartmut Kiewert lives and works in Leipzig, Germany.

“I hope to be a part of the bigger movement or bigger influences on people to change the way they act or the way they see other animals.” – Hartmut Kiewert

Animal Law Podcast #70: The Case of the “Teachable Moments”

Episode 110: “Those who have the privilege to know, have the duty...

Episode 39: “We are called to be architects of the future, not...