How to Talk About Animals w/ Ryuji Chua 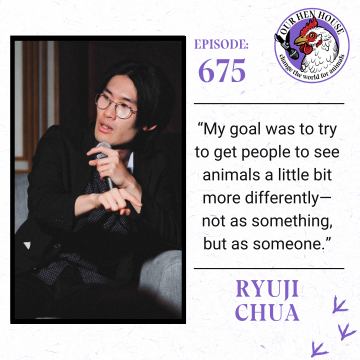 We’re thrilled to welcome filmmaker Ryuji Chua to the podcast this week. You may already be familiar with Ryuji, and his animal rights-focused work, thanks to his appearance on The Daily Show with Trevor Noah earlier this year. In our conversation, Ryuji tells us why it’s important for humans to shift our messaging from broad generalizations, such as saving a species, to recognizing the plight of individual animals who are struggling. We discuss the cognitive dissonance many people have when it comes to the way the animals they eat suffer and why it’s easier for them to believe that animals lack that capacity than it is to change their habits. Plus, Ryuji shares how he came to be a late-night talk show guest, and how his conversation with Trevor Noah went in an unexpected direction.

*We are thrilled to expand the accessibility of our podcast by offering written transcripts of the interviews! Click here to read Mariann’s interview with Ryuji Chua*

Ryuji Chua is a filmmaker who seeks to create a kinder world by connecting humans with non-human animals. He currently works as a video producer at Surge Activism, is an advisor for the Vegan Hacktivists, and was recently featured on The Daily Show with Trevor Noah to talk about animal rights and his latest independent documentary, “How Conscious Can A Fish Be?”

“My goal was to try to get people to see animals a little bit differently—not as something, but as someone.” – Ryuji Chua

Thank you for listening to the Our Hen House podcast! We just kicked off our end-of-year matching campaign, meaning that between now and December 31, your donations will be TRIPLED, dollar-for-dollar, up to $20,000! That means with your donation—plus our Barnyard Benefactors and an added boost from an anonymous donor—we are hoping to raise $60k total.

We can’t do it without you! The only way we’ll receive the matching funds is if we successfully reach our goal of raising $20k from our loyal supporters by the end of the year.  So, if you like Our Hen House, if you believe in our mission to effectively mainstream the movement to end the exploitation of animals, if you find community and solace in our shows and resources, and if you believe in the change-making power of indie media, please make a donation today.

Bones and All (And So Much More!) w/ Camille DeAngelis

Episode 209: “I’m not afraid to fail because the consequences of avoiding...