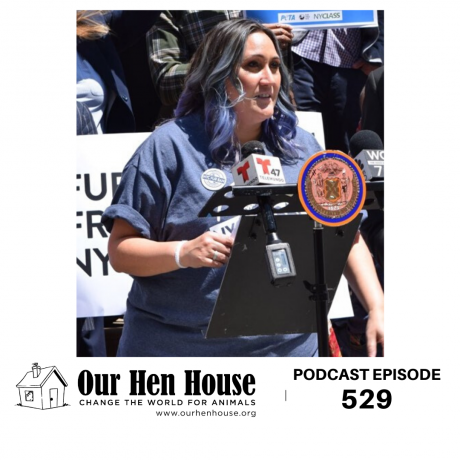 This week Mariann talks to Allie Feldman Taylor, founder of Voters For Animal Rights. Allie works tirelessly to create campaigns that protect the welfare of animals in NYC, and in this fascinating and comprehensive interview she tells Mariann about her work on the foie gras ban, her efforts to ban horse drawn carriages, and how she has worked to protect NYC pigeons. She also tells us about her hopes for a NYC fur ban, the nuances of working with politicians on animal rights issues, and how she approaches political action when up against the opposition of big lobbying groups.
Allie founded Voters For Animal Rights in 2016. Over the past year, she co-led the campaign to ban foie gras in NYC which became law in December 2019. She also co-lead the successful campaign to ban wild animals in the circus in NYC in 2017. Previously, she lead Nyclass’ campaign to ban horse carriages from city streets for over five years. She ran the successful “Anybody But Quinn” campaign to defeat an anti-animal candidate for NYC mayor, getting animal rights into mainstream city politics for the first time. She has worked at the NY State Senate, Obama campaign and the NJ Dept of the Public Advocate. She was named to New York Observer’s “Political Power 80” in 2014 and named to City & State Magazine’s “40 Under 40” political people to watch in 2016. She’s an alumni of Florida State University, vegan, and mom of five cats. She lives in Bed Stuy, Brooklyn where she is a volunteer trap-neuter-release cat rescuer.
In the intro to the show, Mariann and Jasmin talk about Jasmin’s cold, more ridiculous comments from non-vegans about Joaquin Phonenix, the pros and cons of insect protein, Mariann gets a Seeds award from the International Conference on Animal Rights, and Jasmin sees Hannah Gadsby’s new show and hopes she’ll go vegan. Later in the episode, Mariann brings us Rising Anxieties!
As always, the award-winning weekly Our Hen House podcast is hosted by Mariann Sullivan and Jasmin Singer.

Episode 521: Dr. Armaiti May on her work as a vegan veterinarian

Episode 122: “…fight the hardest battle which any human being can fight.”