Excerpt From “Project Animal Farm” By Sonia Faruqi — Giveaway For Our Flock, Too!

At Our Hen House, we do our best to bring you the latest from the world of animal rights. That said, when it comes to telling you about books, there are just so many amazing new ones covering all kinds of animal issues, and we simply don’t have time to review them all (but don’t miss the ones we have reviewed). That’s why we thought long and hard and decided to bring you this exciting program. From time to time, we’ll publish excerpts of the author’s choice — highlighting the best in animal rights books (both fiction and non) — right here on our online magazine.
One general note about OHH’s intention to publish excerpts: We do our best to choose excerpts from books that reflect our values to change the world for animals, and to end their exploitation altogether. However, we are not able to read all of these books in their entirety, and so please note that the books we choose do indeed intrigue us, but might not fully be in line with our ethos — though we hope they are. In other words, vet these for yourselves, and feel free to share your thoughts with us at by emailing info [at] ourhenhouse [dot] org.
Today, we bring you the work of Sonia Faruqi. Sonia investigated animal farms around the world, toward the aim of benefiting animals, human health, and the environment. In an excerpt from her first book, Project Animal Farm: An Accidental Journey into the Secret World of Farming and the Truth About Our Food, she describes the experience of petting a sow at a factory farm.
Flock members — read on past the except for your chance to win a copy of this book! (Not a flock member yet? Join us!)
*** 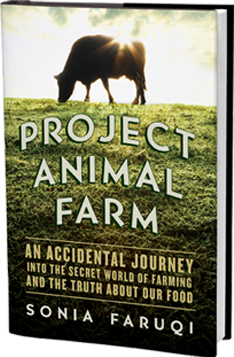 Pregnant Pigs: A Horrible Crime Committed in a Dungeon

(an excerpt from Project Animal Farm: An Accidental Journey into the Secret World of Farming and the Truth About Our Food)
by Sonia Faruqi
The farrowing rooms had each confined sixteen sows; the gestation room confined five hundred. It was gigantic.
The sows in the farrowing rooms had been giving birth; those in the gestation room were pregnant, or to be made pregnant. When the lights went on, the gestating sows rose to life by biting the bars of their crates, smashing their heads against them, and screaming. The racket was as deafening as walking into a room with multiple fire alarms ringing simultaneously. I covered my ears with my hands in the bedlam, biting my lip to suspend my own scream, which threatened to mingle with that of the sows.
The sows’ chaotic cacophony was startling in its intensity, but even more so in its quality. The hysterical, high-pitched howls sounded eerily human—like “the shriek of a man,” in Leo Tolstoy’s words. But a lunatic man, for the sows—splattered with graffiti-like blue, green, and pink letters and numbers—seemed insane in their stationary rampage.
Pig farmer Charlie began walking down an aisle. I, along with Nick and Will—twenty-three-old and twenty-year-old brothers with whose factory-farming family I was living—followed Charlie single file. The sows all around us existed in four long rows of gestation crates. As narrow as my narrow shoulders, the crates were equivalent, in scientist Dr. Temple Grandin’s words, to forcing “a sow to live in an airline seat.”
Like the farrowing crates of the previous rooms, gestation crates allotted not an inch of space for legs. When a sow lay on her side, her legs lodged entirely in her neighbor’s crate—cramping her neighbor, hampering her, poking into her back or her belly—as she did the same with her neighbor to her other side. Nine-tenths of the millions of sows in the United States and Canada today spend their lives confined to such crates.
Charlie’s sows were boxed in from all four sides, imprisoned by bulky beams not just to their right and left, but also above. I asked Charlie what the overhead beams were for. He couldn’t hear me above the clamor. I tapped his shoulder to halt his stride, then hollered into his ear.
“If you give a sow six inches on top,” he shouted back, “she’ll try to jump out of her crate. She’ll step on her feed trough to try to jump out. She’ll never give up. That’s why she has to be closed in completely. The crates have to be really strong to keep her in. They’re made of iron-galvanized steel. The steel’s good and strong, but the crates are dipped in iron, too, so they don’t rust as fast in all the ammonia. Without the iron, they’d rust in a year, tops. There’s a lot of ammonia in here.”
The ammonia created the feeling of fingers of feces poking my nostrils, of a fist unloading feces into my mouth. I felt like I was drowning in dung, like the pressure cooker of manure gases—brimming, bubbling, bristling—would swallow me whole, turning me into a mound of excrement myself. The smog of stench was so heavy and pressing that, feeling sick and claustrophobic, I was breathing only from my mouth for the duration of the visit.
“Why do you keep sows in crates instead of housing them together?” I yelled back at Charlie.
“If you loose-house them, they can fight.”
The logic, in other words, was to restrict all behavior in order to suppress one behavior. Would it not be more sensible to better a sow’s social disposition by improving her living condition?
The sow protests, in their vehemence and violence, in their might and misery, were reminiscent of The Jungle. “The uproar was appalling, perilous to the eardrums; one feared there was too much sound for the room to hold—that the walls must give way or the ceiling crack,” wrote Upton Sinclair of a pig slaughter plant more than a century ago. “There were high squeals and low squeals, grunts, and wails of agony; there would come a momentary lull, and then a fresh outburst, louder than ever, surging up to a deafening climax…. It was all so very businesslike that one watched it fascinated. It was porkmaking by machinery, porkmaking by applied mathematics. And yet somehow the most matter-of-fact person could not help thinking of the hogs, they were so innocent, they came so very trustingly; and they were so very human in their protests…. It was like some horrible crime committed in a dungeon, all unseen and unheeded, buried out of sight and of memory.”
Perhaps it was my wrought emotional state; or perhaps it was the claustrophobic feeling of being trapped in a dungeon; or perhaps it was the fetid, fecal stench of ammonia; or perhaps it was light-headed hunger—I’d been famished earlier, but now could not imagine ever eating again; or perhaps it was simply the observation that the sows were so numerous, and so noisy, and so neglected, and so near.
For whatever reason—in bold disobedience of Charlie, who warned, “The sows don’t like being ‘petted’”—I suddenly wanted to stroke a sow. My hand slipped through iron-galvanized steel bars to descend on a slender, scraggly pink back coated with green writing and black flies.
*** 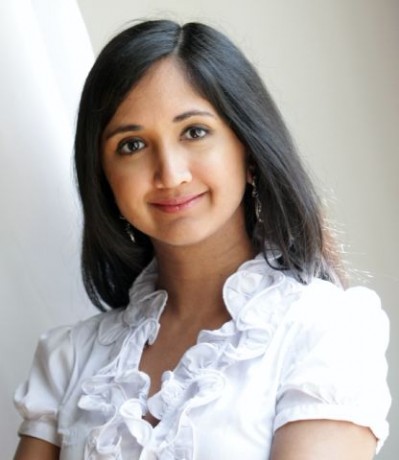 Sonia Faruqi attended Dartmouth College, where she studied Economics, Government, and Public Policy. Upon graduating with several honors and recognitions, Sonia worked at an investment bank on Wall Street. Later, her volunteer vacation at a dairy farm turned into the beginning of a global expedition into the deepest, darkest recesses of the animal agriculture industry. Sonia met and befriended farmers, contract growers, executives and slaughter workers, even living with some of them. The story of her unprecedented quest, Project Animal Farm, aims to make the world a better place for all its inhabitants.

FLOCK MEMBERS, READ ON FOR YOUR CHANCE TO WIN YOUR OWN COPY OF THIS NEW BOOK! (NOT A FLOCK MEMBER YET? Join us, for the animals!)
#PRIVATE#
Hello, Flock!
Want to win a copy of Sonia’s book? You know you do! Just send me an email (anne [at] ourhenhouse [dot] org) by midnight on 7/24 ET. Be sure to include your postal address.
Peace,
Anne

Episode 288: “People get used to anything. The less you think about your oppression, the more your tolerance for it grows. After a while, people just think oppression is the normal state of things.”