At Our Hen House, we do our best to bring you the latest from the world of animal rights. That said, when it comes to telling you about books, there are just so many amazing new ones covering all kinds of animal issues, and we simply don’t have time to review them all (but don’t miss the ones we have reviewed). That’s why we thought long and hard and decided to bring you this exciting program. From time to time, we’ll publish excerpts of the author’s choice — highlighting the best in new animal rights books (both fiction and non) — right here on our online magazine. We hope you dig this new service!
One general note about OHH’s intention to publish excerpts: We do our best to choose excerpts from books that reflect our values to change the world for animals, and to end their exploitation altogether. However, we are not able to read all of these books in their entirety, and so please note that the books we choose do indeed intrigue us, but might not fully be in line with our ethos — though we hope they are. In other words, vet these for yourselves, and feel free to share your thoughts with us at by emailing info [at] ourhenhouse [dot] org.
Today we bring you an excerpt from the novel The Awareness by Gene Stone & Jon Doyle, which Ari Solomon reviewed on podcast episode 233. Flock members — read on past the except for your chance to win a copy of this book! (Not a flock member yet? Join us!) 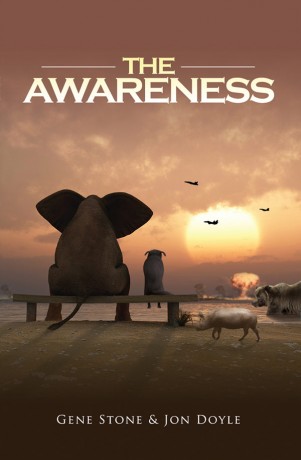 Here’s a brief description of The Awareness:

On a day like any other, all mammals suddenly gain human-level consciousness—and begin a systematic attack on human kind. Among the ranks of these animals are a bear in the Canadian Rockies, an elephant in a traveling circus in Texas, a pig on a hog farm in North Carolina, and a dog living with his beloved owner in New York. As these four animals contend with the realities of who they were before the awareness, and who they must now become after it, they are each called to battle. The animals must then fight two wars: the one outside — between mammals and humans — and the one inside each of their minds.

And to contextualize the following excerpt for you:

Cooper, the dog, and Clio, the cat, first get the awareness, and realize that they have to say goodbye to their beloved human Jessie to join the revolution to fight for animals.

***
Excerpt from The Awareness
by Gene Stone & Jon Doyle
Clio led the way, Cooper close behind. They reentered the house through the pet door, both trying to act as normal as two animals with this new awareness could. Carol was still on the phone, whispering inaudibly into the receiver, still in her floral nightgown and plush slippers. But her body was tense, her back rigid. Her whispers sounded like hushed shrieks.
“She knows,” Clio said to Cooper. “She knows.”
They stole past Carol and climbed the stairs, silently, Cooper looking at the photographs that lined the hallway, celluloid nostalgia, Jessie at various stages of development: a toddler in floaties splashing in a kiddie pool; an eight-year-old birthday girl sliding down a slide, arms raised, carefree; a teenager at her first formal dance, awkward smile silver with braces, hunched shoulders towering over the nameless boy who stood grinning with his floral boutonniere.  Her graduation from high school photo, her graduation from college photo. The photos of her and Peter. There weren’t any photos of him and Peter—Cooper was always Jessie’s.
“Cooper,” Clio said with force. “Make it quick. Say your goodbyes. I’ll meet you downstairs near the door.”
“You’re not saying goodbye?”
“Cats’ actions are our words.”
She wasn’t sure why she said that because the fact was, she wanted to say goodbye just as much as he did. But she couldn’t admit it. Something inside was talking to her about ancient deserts and hunts and things that she had never thought about before, but seemed now to be as much a part of her as Jessie.
Both animals paused on the steps, unsure where this journey was leading. Cooper moved first. He turned and slowly walked up the rest of the stairs, then down the corridor to Jessie’s room. Each step felt heavy on his paws.
He stood for a moment before entering. This was where Jessie had grown up, and it still was a girl’s rather than a woman’s room. Carol had kept it as it was, this animal-themed room, filled with stuffed beasts, all with those dark eyes that, though inanimate, seemed to blink as if they were going to come to life at any moment. Cooper had never paid any attention to them before, but now it was all he could do not to rouse them from their sleep, to see if they would come and fight and join the fray.
Jessie was up. She was waiting. Her eyes were burning.  “Cooper,” she said. “Is it all true? I read about it online. It must be. Is it?”
He didn’t know what to say. He had waited his life for this moment. So many times in the past he had felt so close to being able to speak to her. He often felt he was speaking to her through his groans and barks and whines, through his tail and his eyes and his legs. Yes, he didn’t have awareness like this before, but he had felt something so close, moments when the awareness he did possess was only limited by his inability to communicate it. And he suspected Clio had felt something similar; and perhaps all the other animals had felt they were just a step or two away. Just that close.
Now that he could talk, he didn’t. He jumped up on the bed and nuzzled her. He licked her hand, cherishing the salty smoothness.
“Say something,” she said.
He wanted to say the he knew when she was going to move or flinch or yawn before she knew.
“I’ll start. From the beginning. Do you know I loved you from the first moment I saw you in that horrible cage? I’d wanted a poodle. I was desperate to get a poodle. Then I saw you and I never thought about a poodle since.”
“I love you, Jessie,” he said.
She started to cry. “I love you too, Cooper. You’ve been with me longer than anyone. You’re the only constant in my life. I don’t think I ever quite realized that till now. But you’ve always been there. Always.”
Cooper looked into her eyes. He could feel that breath again, entering his body, then exiting. He could feel the essence of being alive. He could feel something he’d never felt before: the consequence of action. Leaving meant more than just going someplace else. It meant leaving something behind.
She knew.
“Don’t go, Cooper.”
Cooper felt his heart; he actually felt it hurting. “I have to,” he said. He had thought talking to Jessie would be the most wonderful thing that could happen. It wasn’t.
“No,” she said.
I have to stay, he thought. But he also thought, I have to go. He could sense Clio waiting by the back door along with his destiny. If he acted now, he could still meet it. If he waited just one more moment, if he spent one more second with Jessie, he would never leave.
“I’m sorry, Jessie,” he said.
Without looking behind, he left Jessie pining on her bed and went downstairs.
But Clio wasn’t where he thought she’d be. Cooper sniffed the air, trying to locate her scent. He couldn’t. Had she left without him? Perhaps she had gotten a bit of a head start; that was something Clio might do, even before the awareness had set in.
He put his snout to the thin, plastic door, but it didn’t push out. Something was blocking it. A wood plank, which kept Cooper from going out and anything else from coming in. The skunk plank, Jessie had called it.
*** 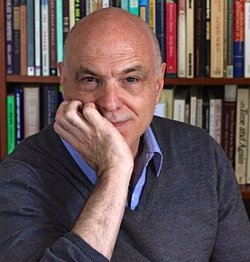 Our friend Joshua Katcher at the Discerning Brute said it best: “There are some people that know a little about everything and some who know a lot about a few things – but Gene Stone, co-author of The Awareness, defies this binary and knows a lot about most things. He’s published thirty-six books (many of them best-sellers), attended both Harvard and Stanford, and plunges into tackling societal dilemmas with gusto and artistry.” (See the entire interview here.)
FLOCK MEMBERS, READ ON FOR YOUR CHANCE TO WIN A COPY OF THIS NOVEL! (NOT A FLOCK MEMBER YET? Join us, for the animals!)
#PRIVATE#
Hello, Fantastic Flock!
Enter to win a copy of The Awareness by Gene Stone and Jon Doyle! Just send me an email (anne [at] ourhenhouse [dot] org) by midnight EST on 2/13. Be sure to include your postal address. And be sure to make someone you love aware of Our Hen House!
Peace,
Anne
Share 0 FacebookTwitterPinterestEmail
previous post