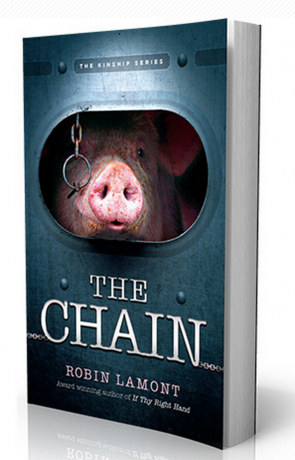 We reviewed Robin Lamont’s new novel, The Chain, on Episode 205 of our podcast. Here’s the short version: We loved it! How refreshing is it to read a really good book that we animal rights activists can relate to? It’s icing on that vegan cake when the book is a real page-turner, something you find yourself thinking about all day. The cherry on top? When that book is so good that you can give it to your meat-eating friends and they will just think you’re sharing a terrific book with them — not doing what you usually do, “pushing your agenda.” Ha! (Trust me: The book will make them think, too — in ways they didn’t expect to.) The audience for The Chain is indeed way, way beyond just those of us who care about animals. It’s for anyone — vegan or not — who appreciates an edge-of-your-seat read. But be forewarned: You’ll become obsessed. And that’s OK, because, lucky for us, this is the first in a series. Consider me addicted to Robin Lamont and everything she writes.

Today, we’re sharing an excerpt — Chapter One, in its entirety — with you. Of course, you’re going to want to go right out and buy your own copy, plus copies for your friends and families. Though flock members can get started reading right away. That’s because they’re getting the whole book for free right here on Our Hen House, starting today with Chapters One, Two, and Three.

Want to win a copy of The Chain? Simply comment below and tell us what kind of fictional character you’d like to see in a novel. Are they vegan? Can you be more specific? Paint us a little picture of the type of character you would like to pop up the next time you’ve snuggled up to read. There are no right or wrong answers (though you get an extra high-five for creativity). You have until Midnight EST on Wednesday, Feb. 5, 2014, to enter. You may only enter one time. We’ll randomly select a winner on Feb. 6. (Flock members have an additional chance to win a copy, so be sure to check out the flock exclusive content.)

Book Review: “Fear of the Animal Planet: The Hidden History of Animal...