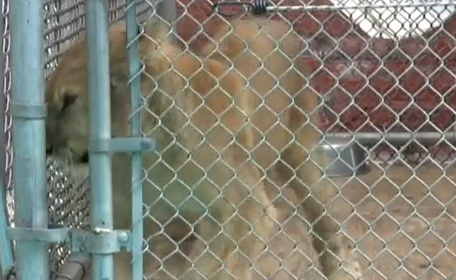 The San Gennaro Feast is an annual outdoor festival held in Little Italy here in NYC. According to its website, the Feast is dedicated to keeping alive the spirit and faith of the early Italian immigrants. There’s parades, music, and lots of food — usually the oppressed, dead variety, though you can frequently find some vegan sorbetto. Though I haven’t been to Italy, the celebration does make me feel like I’m there — the beautiful people, festive environment, and… lions and tiger and bears? OH NO!

Last week I received an email from a journalist whom I had met a few months ago while taking a class on videography. She told me that after researching the concession at the San Gennaro Feast — and then later reading a local Manhattan news website about the event — she came across a restaurant, Cha Cha’s, that (according to the article) was preparing to set up a “petting zoo” on Mulberry Street “stocked with baby lions, tigers, and grizzly bears.”

Meanwhile, before the exhibit was shut down, the journalist was busy doing some investigative journalism of her own — she was recording footage of the pacing animals and the horrified reactions of the passersby. Interestingly, in the video, a man working at the event says the animals were from the group, Lions Tigers and Bears Big Cat Rescue. Odd that a “rescue group” thinks it’s okay to exploit animals for “entertainment value,” and perhaps odder that the restaurant employee said the animals were from Ringling…

In this particular case, the exhibit was shut down. The huge crowds that flock to Mulberry Street during the San Gennaro Feast will not gaze upon these confused, wild animals in captivity and think  that it’s acceptable, or even “fun.” But her video carries with it another message, too: When animals are being subjected to horrifying conditions, the best possible thing you can you do is grab a videocamera and press record. If photos speak a thousand words, videos speak billions.

And really, don’t be intimidated. With a mere Flipcam and a simple editing software program (like iMovie, which is golden), you can expose the dark underbelly of animal exploitation.

For inspiration, take a look at the video.