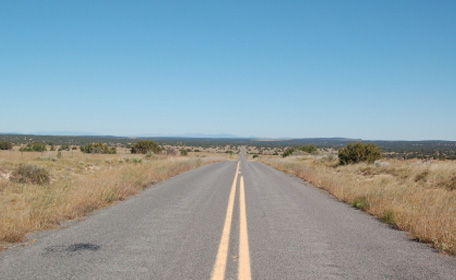 In 2008, I was lucky enough to travel around Southern California with Farm Sanctuary’s “Truth Behind Factory Farming” tour. It was before Prop 2 was called Prop 2, and the idea was that the tour would educate thousands of passersby about the horrors of animal agriculture — which would, in turn, prepare them for voting in favor of the upcoming ballot initiative. (That successful ballot initiative made history in that it was the first one that allowed veal calves, pregnant pigs, and [the truly historical part] egg-laying hens the room to turn around and extend their limbs — an insanely modest measure, but one that put farm animals on the legal map.) 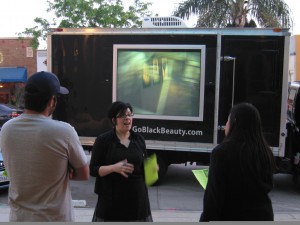 This was me in 2008, leafleting with the “Truth Behind Factory Farming” tour.

My part of the tour was the education part: Driving around The Golden State with a huge truck called Black Beauty that projected movies of factory farming onto its three sides, all the while leafleting Californians with “Go Vegan” brochures. It’s one of the parts of my activist career that I look back on most fondly. Though I was only on the road for a short time, I had the opportunity to talk to so many people who were understandably horrified when they learned about the cruelties inherent in factory farming. When we weren’t showing footage, we hung large banners on the truck that mirrored the inside of transport trucks, so unless you looked closely, you’d swear that Black Beauty was, in fact, a truck transporting animals to slaughter. People on the highway would roll their windows down asking us what our deal was. Five seconds later they’d be reading all about the importance and deliciousness of a vegan diet. It was otherworldly.

Now, Mercy for Animals (MFA) is taking that very same truck on tour — this time with their Farm to Fridge film — “the video the meat industry doesn’t want you to see.” MFA’s Director of Investigations, Daniel Hauff, discussed this video and so much more when he was a guest on our podcast a few weeks ago.

The 40-city (!) tour on which MFA is about to embark will bring this 12-minute film exposing the dark underbelly of food production to college campuses, shopping centers, sporting events, and other public places. According to the press release that MFA distributed earlier this week: 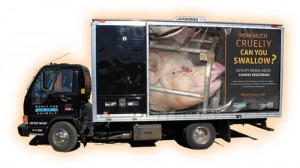 If you are anywhere near one of those cities (and who isn’t?) this is a once in a lifetime activism opportunity. You need to stay on top of when it will be in your neighborood and then get out there to say hello, show your support, and do your share of leafletting.

This kind of in-your-face activism directly challenges the all-too-common brush-off response to factory farming: “I don’t want to think about it.” Similarly to what Eddie Lama did when he documented the general public’s reactions to viewing fur footage in the documentary, The Witness, the Farm to Fridge tour will undoubtedly enlighten, shock, and ultimately change the behavior of the thousands of people who will be forced to confront the harsh truth about their food.

Moreover, just as when I was traveling with the “Truth Behind Factory Farming” tour a few years ago, the sunny side of the situation is clearly veganism — and that’s also the driving force of this tour. Rather than leaving people depressed and without resources to make a change, the outreach component of tours like this makes absolutely certain that the viewers are well-equipped with tools that will make their transition to veganism easy and fun. Oh how I just love this kind of grassroots effort! And, if I know MFA, I am pretty certain that this leading animal rights organization will do their part in attracting tons of media along the way.

You can stay on top of the Mercy for Animals’ Farm to Fridge tour at  www.farmtofridgetour.com. When you show up to do your part, be sure to give Phil Letten — the tour coordinator and one hell of a nice guy — a vegan cupcake, and a pat on the back.