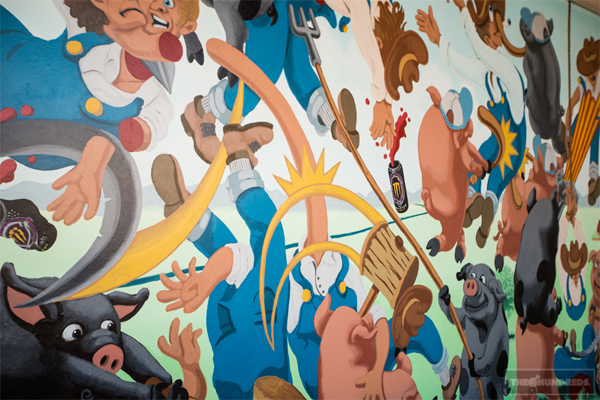 Well this is horrifying and loathsome: Farmer John’s, a slaughterhouse just outside of Los Angeles, has an ironic mural on its building; that of happy, frolicking pigs — in baseball caps, jumping around playing like happy little kids, and enjoying a sunny spring day with their farmer friends. Makes you want to vomit, eh?

Farmer John — otherwise known as Clougherty Packing, LLC — is hardly a friend to pigs. Inside the walls that boast this eye-catching and heartwarming artwork, you’ll find a grim reality. One thing is for sure, that reality is the exact antithesis of what the mural connotes. Slaughtering animals who have lived their entire lives in utter misery is no day at the park, yet the mural might as well be called “A Day at the Park.” This is so bad that it’s almost good. Even a second grader on crack would find this depraved. Enter a “streetwear” clothing company called The Hundreds, which just opened a warehouse and office location down the street from the slaughterhouse. Their Farmer John mural — not to mention the animals being murdered inside the walls — did not go unnoticed by them. And it grossed them out, made them sick.

So The Hundreds did some research, hired the same artists who painted Farmer John’s mural, and created a mural of their own.

In what has officially become my favorite piece of art ever, the mural on the side of The Hundreds’ building depicts a scene in which the pigs are getting back at the farmers — the very kind of “fuck you” that so many of us animal activists imagine in our heads multiple times a day. According to a blog entry written by The Hundreds’ Co-Owner Bobby Hundred, brilliantly entitled Hogtied:

Our re-appropriation of the Farmer John mural now exists at the entrance of The Hundreds’ new office and warehouse space in Vernon, and it’s always an appropriate reminder to all of us starting off our workday — as the little guys going after the big dudes, we’re here to setup the upset and upset the setup.

This usurping of an oppressive image — an image originally intended to distract unknowing passersby from the harsh truth — is nothing short of heroic, as far as I’m concerned. The Hundreds turned this image on its head in true activist fashion, transforming it into the shiniest possible example of subversive art — the stuff that social change is made of.

It reminds me of the work of artist Sue Coe, whom we featured in a video we made for our Art of the Animal series. Sue is known for her harrowing, subversive art, my favorite piece being “Riot of the Fowl,” depicting hens getting back at human (un)kind. (In the interest of shameless OHH promotion, I should note that you can get a signed copy of this poster by donating $250 to Our Hen House.) “Riot of the Fowl” by Sue Coe

The Hundreds made a video about their “take back the mural” escapade, which I strongly suggest you set aside 3 minutes to watch.

Episode 165: “Who feeds a hungry animal, feeds his own soul.”

Episode 225: “Re-examine all that you have been told… dismiss that which...

Episode 601: The Shift Away from Vivisection ft. Aysha Akhtar

Animal Law Podcast #23: Gabriel Walters and the Case of the Secret...

Episode 233: “People are fed by the food industry, which pays no...