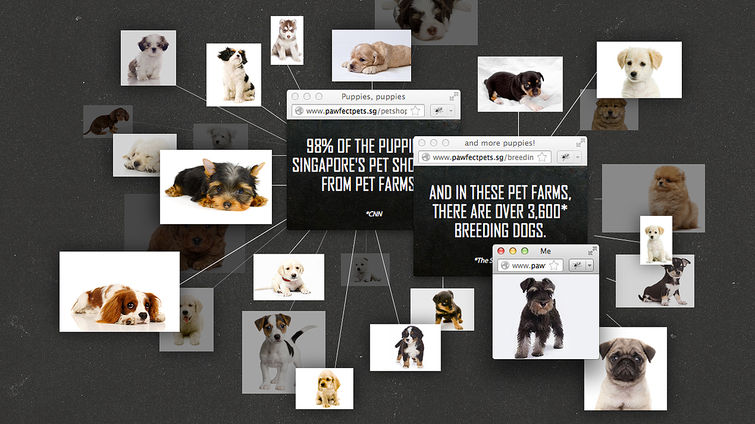 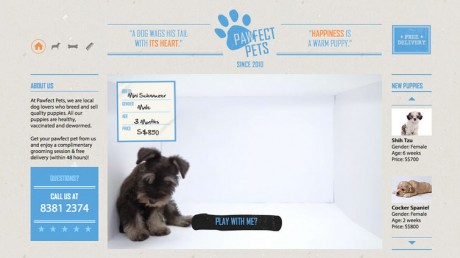 I’ve long been a fan of using interactive online media to shed light on the plight of animals. OHH contributor Anat Pick recently shared her thoughts on the  interactive  experience, Bear 71. And certainly Mark Middleton (of Animal Visuals) is the master of such digital tools; we recently told you about his Virtual Gestation Crate. Then there’s Commercial Street, which, as we reported back in 2011, is an alternate reality in which a nutritional or product label — rather than disclosing carbs per serving or instructions for wash and care — details the true origins and impact of each item as well as how animals were exploited to make it. In a culture where so much animal abuse remains hidden, interactive online tools are often as close as most of us will ever get to the realities kept under lock and key. Leave it to graphic artists, designers, and web developers to open the door.
My newest favorite interactive experience that aims to change the world for animals is Pawfect Pets, which was created by the Singapore-based digital agency, Yolk. First, we, the viewers, go to the website, which perfectly (paw-fectly?) resembles an online store for a “responsible” breeder. Immediately, we are wooed by an adorable and fluffy miniature schnauzer who begs us to play with him. So we play with him. Awwww, cuuuuute. We tell him to drink — he drinks. We tell him to play with his toy — he plays with his toy. But then he has a request of us. He wants to show us where he came from, so we click through, and suddenly — by way of grueling footage — we’re inside a puppy mill. We see skinny, malnourished, and stressed out dogs. When we pause the video to regain our composure, we are given facts about these dog factories — including, as quoted from The Straights Times: “He (pet farm operator) slashed the amount which was supposed to be spent on dog food from some $1,500 per month to only $450.” Or, from CNN: “98% of the puppies in Singapore’s pet shops are from pet farms.”
According to Co.Create‘s review of Pawfect Pets:

Different videos for each of the options of what users can watch the puppy do shows a different aspect of the cruelty of mill facilities. The dogs there appear to have to stand on the wire at the bottom of cages all day long, are given little food and water, and have insufficient access to veterinary care. 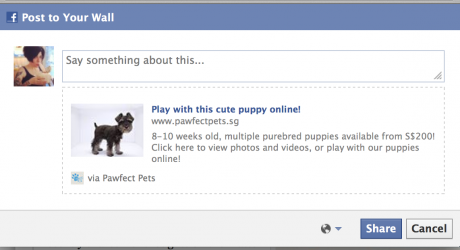 There are a lot of bells and whistles to this website, all of which are music to the animal advocate’s ears. One which I particularly appreciated was the Facebook “share” option. Click on it, and that same little puppy shows up along with a message that will be posted to your wall saying precisely what real online dog stores would say: “8-10 weeks old, multiple purebred puppies available from $200! Click here to view photos and videos, or to play with our puppies online!” Unsuspecting folks would click the link, delight in the cuteness, and then — BAM! — the truth will set them free. Them meaning the dogs, not to mention our consciences.