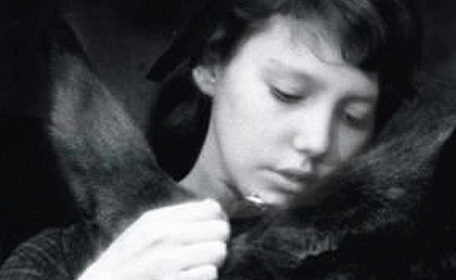 Great films never go out of fashion, and neither do great reviews of them, which makes this article a perfect piece to feature on #ThrowbackThursday! Film analyst extraordinaire Loredana Loy gives us her take on a contemporary film that tells the heartbreaking story of a horse, and a much older film that narrates the equally tear-jerking tale of a donkey. You may have to get thee to Netflix after reading this one, folks.
This article originally appeared on Our Hen House on March 6, 2012. If you’d like to see a certain OHH article resurrected, email us at info [at] ourhenhouse [dot] org.
***
Here’s the latest from activist Loredana Loy with her insightful commentary about animals and the movies.
***
When Death is the Only Escape: An Unapologetically Animalcentric Review
by Loredana Loy
I was privileged to view two movies that screened recently in New York City, each of which, in its own way, managed to relate the unbearable fate that nonhuman animals endure at the hands of human animals. While much of the commentary about these movies has centered on the experience of the human characters, or characterized the animals as symbolic representations of some aspect of human experience, I cannot accept that the vision of these extraordinary filmmakers does not encompass the realities that they so effectively convey about the lives of their non-human characters. Perhaps the resistance on the part of many reviewers to seeing these films from an animalcentric point of view is because it is simply too heartbreaking. As animal advocates, we are all too familiar with the denial that prevents people from confronting the reality of animal abuse. Nevertheless, we must, if we are to view these films authentically, face the fundamental brutality at their core. Thus, I choose to approach each of these works from an animalcentric point of view. 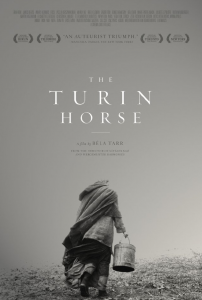 Despite its title, Béla Tarr’s The Turin Horse (2011), does not center much of its 146 minutes of visual narrative on the horse, but we intrinsically feel that she is central to this story. We never learn her name – let’s call her “She.” In the little screen time that She receives in this absolutely stunning and heartbreaking movie, we are presented with the destiny shared by many “beasts of burden.” She is worked to exhaustion, carrying her “master” to town and back in freezing cold and scathing winds. The opening scene of the movie is a glimpse of her life as a slave, her torment, and her inescapable doom.
But She decides that there is an escape, one that most humans would not even consider accessible to her or her kind. She stops eating. This is the only action available to her. The man tries to force her to work, pushes and whips her. The woman understands that there is no point. Indeed, the only moment of warmth and empathy ever shown among the beings in this triangle takes place between the woman and She. It is just a gentle touch of She’s face, and a question: “Why are you not eating?”
There is a sense of gloom descending upon this small settlement, the water from the well has dried out, and the wind won’t stop. The people decide to leave the house, loading their few belongings in the cart, which the woman pulls instead of She, while She, who is clearly dying, is tied to the back of the cart. As they disappear into the distance, a flicker of hope momentarily lightens our tension. Minutes later, as their silhouettes reappear on the horizon, we know that there isn’t any hope. She is back in the stable, the doors are closed. The family is back in the house. It is the middle of the day yet suddenly darkness falls. Somehow we know that this is the sinister abyss that will end it all. Perhaps She knew it was coming. Perhaps She was living in it already. 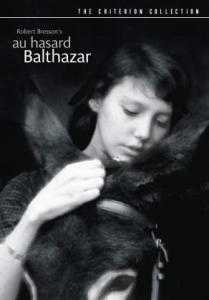 Robert Bresson’s Au Hasard Balthazar (1966) follows the life of Balthazar, an adorable donkey, from the moment that a group of children snatch him from his mother’s teat to make him their pet. He spends a few years of happiness with Marie, who loves him dearly. Later on, her family gives him away because his “value” is no match for that of a tractor. Balthazar is pushed from owner to owner, their cruelty only equaled by Balthazar’s increasing misery. Just like She, Balthazar attempts to resist his fate through the limited means that are available to him. He tries to get rid of his cart, runs away a few times, and even manages to get back to Marie for a short period of time. Every attempt fails. Put back to work by people to whom he is only a tool, he is beaten, starved, left to freeze in cold rain and snow.
One of the most surreal moments in the film occurs when Balthazar is forced to become part of a traveling circus and comes face to face with caged animals for the first time. A tacit conversation takes place between him and a tiger, an elephant, a chimp, and a polar bear, as they glance at each other, and Balthazar realizes that their lives are even more wretched than his.
In the end, abandoned on the top of a mountain with a cargo of smuggled goods on his back, shot by the border patrol, Balthazar walks through a meadow with his burden that he cannot get rid of. Exhausted from his wound, he lies down and is surrounded by a flock of white sheep. This communion with his fellow beings offers him comfort in his final moments. Balthazar is free.
If seen from an animalcentric point of view, both of these films give us an unrelenting portrait of the suffering we inflict upon the often invisible victims of our cruelty. Of course, as we watch these movies, or any movies that use animals, we can never forget that the animals who portray She and Balthazar are actors, but not by their free will. Their true stories will remain untold. This adds yet another level of depth to the understanding of the invisibility of animal suffering and exploitation that these films bring us.
But this is also another way in which these films remind us that invisibility is not inevitable. It is a pact between the exploiter and those who refuse to see, a pact which we are not obligated to enter into. When confronted with real footage of animal suffering, some of us refuse to watch. Some say that watching does not help. Some even say that it hurts, by making us feel so powerless. However, those individuals whose lives or deaths are being documented, the few among the innumerable who suffer in perpetuity, provide us with a glimpse into a reality that we have no right to decline to see. In the end I think that we owe them, at the very least, the very small gesture of bearing witness to their suffering.
***
Loredana Loy is a long-time animal liberation activist and a graduate student at New York University. She is studying the animal liberation movement through sociological and cultural lenses. Her research is focused on cinema as a tool for promoting animal liberation messages. Don’t miss her analysis of Rise of the Planet of the Apes.
Share 0 FacebookTwitterPinterestEmail
previous post

Vegan Artists and Art-Lovers, Listen Up

Animal Law Podcast #70: The Case of the “Teachable Moments”

Episode 275: “I have no objection to vivisection, provided the vivisectors experiment...