Dear Flock,
Happy Pride Week. Have you noticed the gay pride related posts that are all over Facebook, Twitter, and the media? I feel like Pride is bigger this year than ever before — or am I just more tuned into it? Two nights ago, I was walking across Christopher Street in the West Village, and even though it was evening, I seriously could have used a pair of sunglasses to shield myself from the blinding rainbows everywhere. I swear that if I sneezed, rainbow fairy dust would have emerged. New York City is most certainly ready for this Sunday’s big parade. I’m excited that Mercy for Animals will once again have a presence, marching behind a banner that says, “No One Is Free While Others Are Oppressed.” Ain’t that the truth…
My favorite Pride-related tidbit hit my radar just last night. It was a photo that showed up on my Facebook feed, originally shared by human rights activist Cleve Jones. Here is what Cleve had to say:

Stonewall was a riot. Don’t forget that. It wasn’t sponsored by corporations or the Democratic Party. No politicians or candidates rode up on floats. No balloons, no rainbow bunting, no brunch. It was a spontaneous uprising by mostly gay street kids, some drag queens, transexuals and dykes. It was a hot summer night, they were sick of the cops and the mafia and the war. There were no leaders. They’d had enough, revolution was in the air, and they fought back. I was fifteen years old and wouldn’t learn of the riot until two years later. When I did, it changed my life forever.

And this was the powerful image that accompanied that statement: 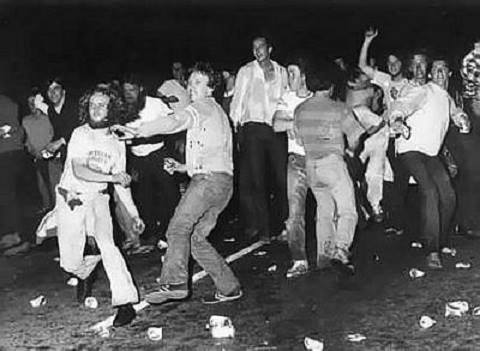 “A spontaneous uprising.” Does that give you chills like it gives me chills? “They’d had enough, revolution was in the air, and they fought back.” Does that inspire you as much as it inspires me? Does it motivate you? Does it make you reassess your activism? Does it drive you? It drives me.
With all of the made-in-China rainbow bracelets all over Christopher Street this weekend; with all of the clothing stores around the neighborhood proudly displaying queer-themed window displays; and with all of the memes appearing on social media, does it make you stop and think — the Stonewall Riots were the culmination of anger, frustration, and an absolute need to no longer put up with oppression? Does that move you as it moves me?
Don’t get me wrong — it thrills me how “proud” New York City is this week, and how “aware” people seem to be about LGBT rights. I myself feel pride. I found myself smiling when I noticed the brightly colored banners decorating Christopher Street, home to my tap school and my gone-but-not-forgotten twenties. Though I used to scoff a bit and roll my eyes, say that the idea of a Pride parade was simply assimilationist and did nothing to approach the real issues of violence that still face the LGBT communities (in the last year, reported hate crimes against the LGBT communities increased by a whopping 27% in the five boroughs), my viewpoints have since evolved a bit. (Perhaps that started when I wrote about how I “Traded in Skepticism for Matrimony” on my Huffington Post column last year.) The truth is, nowadays, I love the brouhaha. I love the party. I love the pride. (Even though I’m still keenly aware that a “designated week” does not by any means address the underlying issues of violence in NYC, in the United States, or well beyond — resulting, in some places, in imprisonment or death.)
But that quote… That sentiment… It really got me.
The animal rights movement has a lot to learn to from the gay rights movement — and, I’d argue, vice versa. And, of course, we already know that violence is violence, no matter if it’s a butcher or a bully holding the knife. Same wheel, different spoke. Same intent, different victim. Same bigotry, different day. Same solution? Somewhat — yes…
Let’s take a step back and reconnect with the passion and impetus behind why we want — no, need — to change the world for animals. Forget about your favorite cupcake recipe for a moment, and think about what is truly going on, right now, behind closed doors for animals. Stop clicking “like” or “share” on Facebook long enough to remember that this is a death machine, and we absolutely cannot get blinded by our own egos, or by the trendiness or kitsch of standing for something — just as we can’t get blinded by rainbows, even if they are pretty.
The animals, too, need a spontaneous uprising. And since they are behind bars — just like Jane Doe, a 16-year-old trans girl of color held in solitary confinement — it’s up to us to demand a revolution.
Be proud, and be relentless.
xo jasmin
[P.S. This piece was originally flock-only content but I was encouraged to make it available to everyone, so I changed the settings.]