Flock Doc: The Power of the Documentary (Plus a Giveaway of Tickets to the Premiere of Cowspiracy!)

Dear Flock,
Here on Our Hen House we squawk a substantial amount about the power of art as activism; how could we not considering some of these innovative and profound projects? Though all of these artistic endeavors occupy important places in the realm of animal activism, one of the mediums that has taken the world – and not just the animal rights world! – by storm is the documentary. With revealing footage, groundbreaking interviews, and well-crafted story lines, these informative films appeal to audience hearts and minds to change the way they think and, often, the way they act. #PRIVATE# 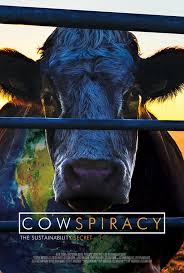 The animal rights canon is supremely lucky to include a plethora of ingenious and well-known documentaries: Vegucated, Blackfish, Earthlings, Forks Over Knives, The Cove, Peaceable Kingdom, Maximum Tolerated Dose…the list goes on! All of these films have made enormous impacts in mainstream circles, from Vegucated‘s numerous film festival awards to Blackfish‘s influence on public opinion toward SeaWorld to Forks Over Knives‘ publishing of two cookbooks that spent a total of 89 weeks on The New York Times‘ best-seller list.
Not only can I see these animal rights documentaries affecting the public at large, I’ve also witnessed firsthand their role in inspiring a number of my friends and family. Little did I know that after watching Forks Over Knives with my mother, she and my father would first shift to a plant-based diet, then feel comfortable enough to call themselves vegan, then start seeking out non-animal-tested cosmetics and use the term “companion animal” instead of “pet”! And just the other day I received a Facebook message from a classmate who had seen Vegucated and now celebrates her seventh month of vegetarianism (with the goal of veganism in the near future!).
With all of this awesome work that documentaries accomplish in mind, I’m unbelievably thrilled about the newest addition to the animal rights film canon: Cowspiracy: The Sustainability Secret. Touted as “the film environmental organizations don’t want you to see,” Cowspiracy investigates why the world’s leading environmental organizations are too afraid to talk about the single industry that most contributes to planetary destruction: animal agriculture. The filmmakers promise that Cowspiracy “will be as eye-opening as Blackfish and as inspiring as An Inconvenient Truth,” and I’m wholeheartedly inclined to agree. Just check out our interview with the film’s directors Kip and Keegan on Episode 236 of the Our Hen House podcast – I dare you not to jump around in excitement after listening to their moving words.
Cowspiracy recently celebrated its premiere in Los Angeles, and is currently screening across the U.S., including in at the New York City red carpet premiere on August 21. Lucky for you, the fabulous folks behind Cowspiracy have offered one set of two free tickets to the NYC premiere for Our Hen House Flock Members! Cowspiracy isn’t providing this chance to see the film’s premiere for free to any other outlet, so we at OHH feel immensely honored to be able to offer you this giveaway.
To enter, simply email alessandra [at] ourhenhouse [dot] org by Midnight EST on Monday, August 18, with your full name and address. Please make the subject line “Cowspiricy Giveaway.” The first Flock member to write in will get two free tickets!  This is only open to flock members, and you can only enter once.
In solidarity,
Alessandra Seiter
Intern & Contributing Writer
Share 0 FacebookTwitterPinterestEmail
previous post

Episode 240: “The conventional view serves to protect us from the painful job of thinking.”