Flock Only: Discount Code for GrapeCat, Giveaway of “Saving the White Lions,” and My Thoughts on the Red Robin Frenzy 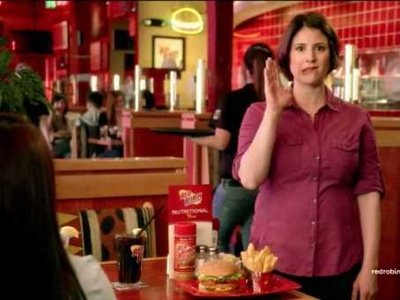 This is from the Red Robin ad.

It’s been kind of an insane week. Perhaps you’ve already seen the article on the front page of Yahoo, “Red Robin Ad Mocks Vegetarians With ‘Teen Phase’ Joke, Guess Who’s Not Laughing?” The article was referencing the fast food restaurant Red Robin’s new ad, which states #PRIVATE#“We even have a Gardenburger — just in case your teenage daughter is going through a phase.” WTF?! Mariann and I actually had the, uh, pleasure of seeing this ad when we were on our “workation” last week in Provincetown (here in NYC, there are no Red Robin restaurants). We were appalled! We made a note to discuss the ad on this week’s “ramblings” for the podcast, which you can bet we’ll be doing.
When we got back to NYC, a reporter, the fabulous Beth Greenfield, contacted me, saying she was writing a story on the ad, asking if I would comment. Would I?! Here’s what my full comment looked like, before it was cut for the piece:

Though I applaud any fast food chain that offers a veggie burger, and I hope that more do, the idea that not eating animals is reserved solely for teenage girls going through a phase is obviously meant to insult both vegans and girls. Why is Red Robin insulting the very customers it’s reaching out to? Actually, I think it’s just one more sign that anxieties are rising about meat consumption. Vegans experience this all the time — meat eaters mounting vigorous, often sarcastic, defenses of meat consumption even though no one has said a word about it. But to have a company actually get so defensive that it insults the customers that it’s trying to woo is really a sign of the times. Veganism is the only compassionate way to eat, and it’s also incredibly healthy and eco-friendly. It’s clearly the way of the future. I’m glad to see that Red Robin has noticed, but would urge them to rethink a marketing strategy that insults what is likely to be an exponentially growing market.

The article came out a few hours later, with just a snippet of my original comment (as expected). Actually, it was a fairly innocuous part of my comment that made the final piece, pretty much stating what was simply fact: that the ad is offensive for both vegans and girls, and that it seems odd that Red Robin is insulting the very market it’s reaching out to. After a similar sentiment from PETA, the article quoted extensively from OHH’s Katrina Donovan Fleming’s recent OHH feature, “Just a Joke: Confessions of a Humorless Vegan.” Here is just part of what was quoted from Katrina’s OHH article:

“The key, it seems, is to remember that there is probably a kind soul behind the offending joke, and to then connect to the person on that level,” Donovan Fleming suggests. “Very few people would actually find animal abuse funny. If you can plug into that, share some food for thought, and give the person the benefit of the doubt, incredible things can result.”

Let me first say that I’m completely elated about this article! In less than 48 hours since it was published, it has garnered over 13,000 comments! THIRTEEN THOUSAND! Since I’m not a masochist, here’s how many of those I have read: Zero. But I’m thrilled that a veggie burger ad is getting this much attention, and I’m excited that Yahoo included my two cents.
While I knew enough to not read the comments, what I did not expect to happen was to get a slew of personal emails attacking me. What I also did not expect was for several of those emails to be downright gay-bashing me. I will get into a bit more of the details this weekend on our podcast, but can we take a moment to bask in the ultimate irony of what has happened here? Keeping in mind the backlash I have gotten because of it, and the horrible behavior in which literally tens of thousands of people have partaken, may I remind you of the part of my quote that the article did not run — which is, in fact, a perfect psychic vision of what ultimately went down?

Actually, I think it’s just one more sign that anxieties are rising about meat consumption. Vegans experience this all the time — meat eaters mounting vigorous, often sarcastic, defenses of meat consumption even though no one has said a word about it. But to have a company actually get so defensive that it insults the customers that it’s trying to woo is really a sign of the times. Veganism is the only compassionate way to eat, and it’s also incredibly healthy and eco-friendly. It’s clearly the way of the future. I’m glad to see that Red Robin has noticed, but would urge them to rethink a marketing strategy that insults what is likely to be an exponentially growing market.

I admit to being a little freaked out by the gay-bashing emails I’ve received. But, that being said, when I tell you that I’m really flipping excited about all that has come of this article and this ad, I mean it. Perhaps it’s PETA-ish of me, but the fact that this story has resulted in such a media outpouring (there have been tons of other news stories, also quoting me, popping up all over — including one written by a vegetarian in Costa Rica) is, I think, very, very good for the animals. The outcry is just a sign of “Rising Anxieties” (to quote our podcast segment). Wasn’t it Gandhi who was attributed as saying, “First they ignore you, then they laugh at you, then they fight you, then you win”?
Onward!
I’m thrilled to be offering you, our darling flock, not one, but two special offers today! First of all, this weekend’s podcast episode — #180 — is full of quite a lot of passion. In addition to discussing the Yahoo article, we will also talk about a study asking people why they’re not vegan, the importance of bringing animal rights into the conversation whenever and however we can, the skinny on Newport, Rhode Island, and my encounter with a bartender who had a chip on his shoulder (another sign of “Rising Anxieties” — you’ll find out why). And! We will also give you our thoughts on the 30-minute documentary, What’s for Dinner?, produced by Brighter Green. Plus, we will interview the incredible activist Linda Tucker, author of the new book, Saving the White Lions: One Woman’s Battle for Africa’s Most Sacred Animal. On Saturday’s show, you will hear from Linda all about the plight of the white lion, including the roundabout way she got involved with this important cause. 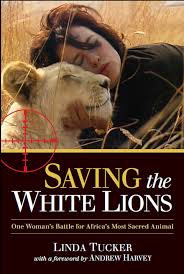 And here’s where your exclusive flock giveaway comes in! We’re excited to offer to one lucky flock member a copy of Linda’s book, Saving the White Lions: One Woman’s Battle for Africa’s Most Sacred Animal. Since we could all use some positivity (eh hem), here’s what I’d like to do: To be entered to win a copy of Saving the White Lions, leave a comment below sharing with the rest of the flock a sign of the times that gives you hope. This can be anything from the amount of vegan options popping up left and right (be specific if you can!), the vegan character who appeared in the novel you’re reading, a piece of legislation that passed that protects animals in some way … Hell, it can even be the Red Robin ad! Though it might sound backwards, that gives me hope! You can only enter one time, and this is only available for flock members. When you write your comment, please be sure to include your email address in the form so that we can contact you if you win. You have one week to enter. That means you have until Thursday, June 27 at midnight EDT. On June 28, we will randomly select a winner, using a random number generator, and we’ll email you to get your address. This is a really special book, about a subject that I venture to guess most of us don’t know too much about. So I hope you win!

I’m also thrilled because Episode 180 of our podcast is being sponsored by the new online vegan store, GrapeCat! Bucks County, Pa. is well known for its beautiful countryside, its farms, and a strong support of the vegan and animal rights communities. And now, a local vegan couple is going worldwide to help like-minded people live their values with a new online store, which you can find at www.grapecat.com. The incredible people at GrapeCat — James and Christine Lucas of Pipersville, Pa. — are offering the flock an exclusive 25% discount for your order! The exclusive 25% off discount code, just for flock members, is “Flock”. Put that in when you go to check out, and please don’t share that code, as it’s especially for you! (BTW, GrapeCat has a lot of fantastic items — from dresses to stuff for kids — but my favorite item is the chic Our Hen House tote bag!) We’ll tell you more about GrapeCat on Saturday’s show, but do check out their awesome online store, and support their incredible work.
That’s about it from me for today. I hope you are all doing well. I have tap tonight, which is always a great way to “forget your troubles, come on, get happy …” (I can’t believe I’m singing in a letter to you). My key card for my new CitiBike membership came in the mail today. I’m terrified and thrilled. I wonder if I’ll bike up to tap? In any case, I hope you hear from me next week …
xo jasmin
P.S. The amazing photographer Jessica Mahady came by last week to take some photos of me and my tattoos for a super special piece that I’ll be working on with OHH’s Jennifer Molidor. Though I won’t tell you what, specifically, the article will be about, I can’t help but share one adorable photo she took of our sweet Rose (she also took my new bio headshot). Jessica Mahady is so incredibly talented and amazing, and a passionate vegan herself. 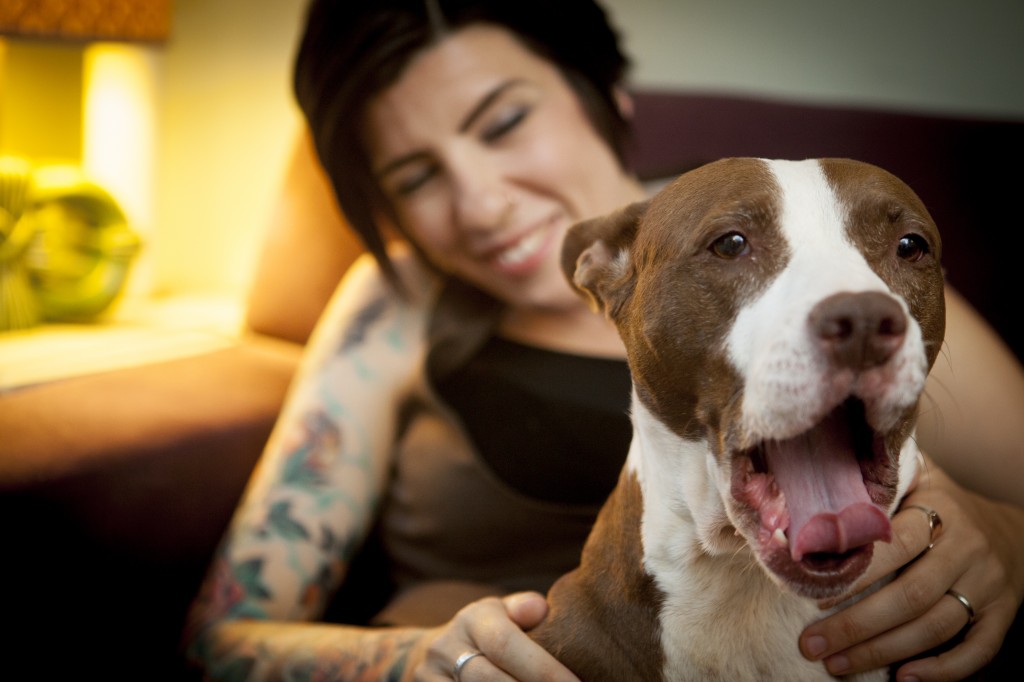