Flock Only: Inside the Coop of Our Favorite Personal Activist Moments of 2013 (Plus a Giveaway of “Maximum Tolerated Dose”)

Dear Flock,
With 2013 just about finished, it’s not only a good time to take inventory of our lives — priorities, mistakes, successes, relationships that have thrived, relationships that have been lost  . . . — but it’s also an ideal time to assess the advocacy in which we’ve personally been involved throughout the past year. #PRIVATE#
For me and Mariann, it’s been a real coup to work day in and day out on Our Hen House, continuing to bring you a new podcast episode each week, multiple breaking news story updates each day, and new content on our online magazine added constantly. When we’re not entrenched in the inner workings of OHH, or traveling the country speaking about activism and veganism, I watch with awe as Mariann teaches Animal Law classes at schools such as Columbia, Cardozo, and NYU.
But what about the rest of the Our Hen House team? Last night I sent around an email to them posing the question, “What was your best personal activist moment from 2013?” Within a half hour, I heard back from my team, and I simply sat at my computer, mouth agape, pretty much speechless. This is a fine group of people to work with — I knew that already. But after seeing in one place all they’ve been doing in their “spare time” — that is, when they’re not working on Our Hen House, which is clearly activism in and of itself, and when they’re not working at their day jobs — I realized that y’all have to read it for yourselves. If you don’t finish this feeling inspired (not to mention verklempt), well, you might consider getting some blood work done . . .
I’m frequently asked who my heroes are. The folks below, and those like them — which probably means you — are my heroes. The “everyday people” whose actions to change the world for animals remain unsung, are, in my opinion, the reason that our movement is growing by leaps and bounds.
Here are some snippets from some of the folks who I’m proud are “inside the coop” here at Our Hen House. These are their proudest personal activism moments from 2013:
JL Fields, board member:

I became the lead organizer for the Colorado Springs Vegan and Vegetarian Group Meetup in March. We now have 600 members and we hosted the first-ever vegan pop-up market in Colorado Springs in November, with over 100 shoppers. I learned that anyone can make veganism visible through a market, and I encourage others to do the same! 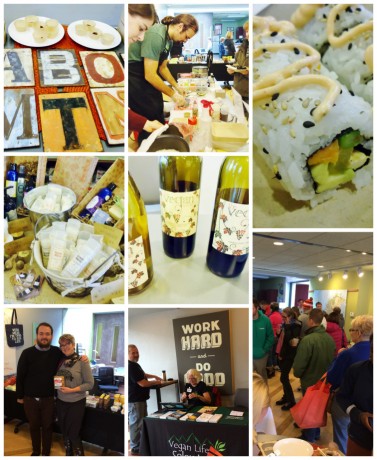 JL’s vegan market is a replicable form of advocacy. It looks like fun, too!

Without a doubt, my best personal activist moment was starting a petition that I didn’t expect much to come of, and yet it started the ball rolling on something that will, without a doubt, change the world for animals. When the Barenaked Ladies started going public with their thoughts to potentially cancel their performance at SeaWorld, I thought “Well, who else might be reachable?” I chose Willie Nelson. He’s an active environmentalist, he’s been a voice for animal issues, and he’s by no means a silent activist. I started a petition on the 27th of November, and on December 6, Willie confirmed that he would not be playing the SeaWorld venue, due in part, to a petition with thousands of names on it — MY petition! His cancellation was like an early Christmas gift, but it got better. Since his cancellation, Heart, .38 Special, REO Speedwagon, Trisha Yearwood, Martina McBride and Cheap Trick followed suit! I was even interviewed by my local news about it. Even the simplest actions can make a huge difference! It took me no more than 15 minutes to get a petition put together, with the help of Pulin Modi at Change.org. That petition created a landslide — one that I, of course, had hoped for, but certainly hadn’t expected. 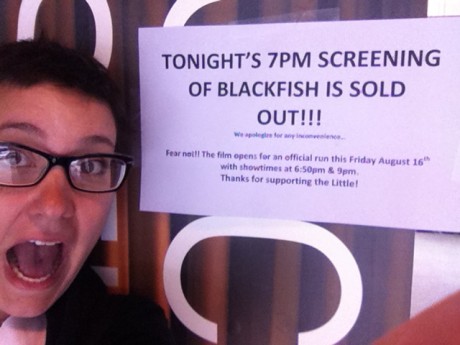 Danielle discussed her recent success on Episode 205 of the Our Hen House podcast.

I spent years trying to get family and friends to watch Farm To Fridge, but in just one day of volunteering at a Paid-Per-View with Mercy For Animals at EcoFest 2013, I was part of the reason that 261 people watched the graphic video. We paid them a dollar to watch, but most people gave their dollars back. I saw individuals transform before my very eyes. They were often moved to tears. A grown man sobbed in my arms. My experience facilitating that Paid-Per-View was my best personal activism moment from 2013, and it is easily replicable. Anyone with a computer or tablet can set up a viewing station and get people to watch. There’s plenty of information on how to do this. So give your family and friends a rest, and focus on people you don’t know (yet). It’s easier than it seems (and kind of addictive)! 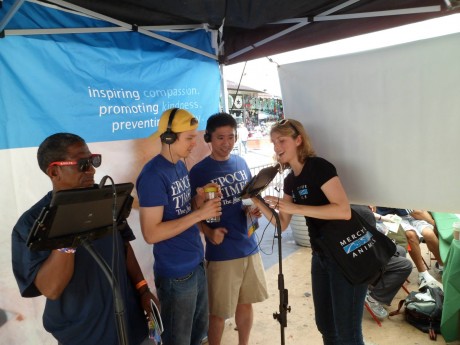 That’s Liz on the right, doing her thing. Videos of what happens to animals behind closed doors are such an important way to educate others about the moral imperative to go vegan.

My most satisfying activist moment of 2013 was standing in the back of a packed theater — for an event I helped to spearhead and organize — as the documentary Peaceable Kingdom played for 500 people, and afterwards looking through hundreds of comment cards and reading proclamations such as:

“I am sad to say that I had become desensitized to what it meant to eat animals — that only certain animals were the ones to be loved. Tomorrow I go vegan. My optimum goal: to see how I can be an advocate for all animals.”

The firsthand tangible results of so much planning and promotion was tremendously gratifying. Months later, I am still constantly given reminders of the ripple effect of this. It has also inspired me to continue to host film screenings here in the Tucson area. Whether it’s loaning a DVD about animal issues, leafleting, or having conversations on a plane, KNOW that inspiring others to reconsider the status quo will not only affect them, but, in turn, will pay forward and continue on and on. 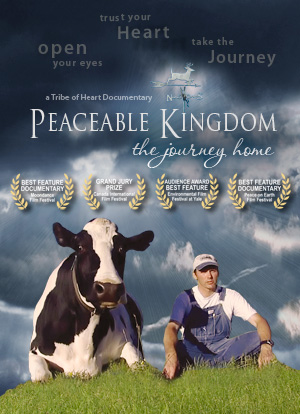 Leading the petition to stop the Great Bull Run from coming to Atlanta is something I will never forget. It was emboldening and gave me the courage to speak up for the voiceless. I was interviewed by a local radio station and a local newspaper, received over 8,000 signatures on the petition, and even met with city officials — all in the fight to end animal exploitation. Though we didn’t win this time, this experience has taught me to never underestimate your own abilities and to take every opportunity to change the world for animals. 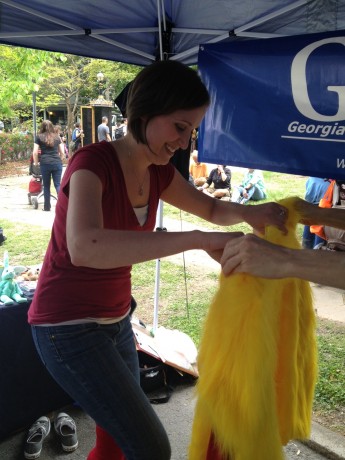 Alison getting dressed as a chicken in order to help run a GARP (Georgia Animal Rights and Protection) pay-per-view tent. 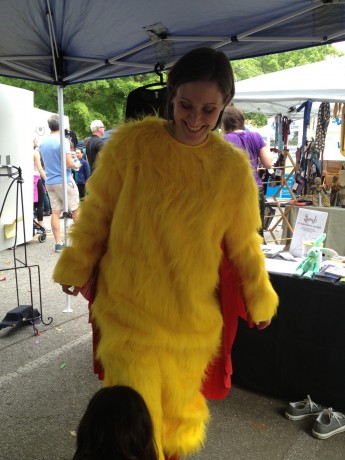 My best activist moment this year was definitely spending three grueling weeks volunteering to help Action for Animals promote veganism at Warped Tour. I got to speak in depth with countless young adults who only seemed to need a small push to go vegan, and I even met one or two younger kids who had adopted a vegan diet on their own! Activism is hugely rewarding, and the more work it is, the bigger your impact will be, so if there’s any task calling out to you that you’ve been saving for “someday” because it seems too big or difficult, do it now — just take it one step at a time. I promise you won’t regret it. 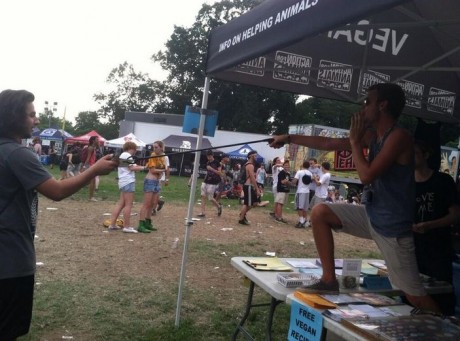 During Warped Tour, Amanda’s friend, Cole, offered people “Go Vegan” leaflets using a grabber! Hey, to each his or her own . . . . As long as it gets in people’s hands, right?

I think it’s worth mentioning that in my follow up emails with some of these folks from OHH, they mentioned the successes they’d had while using social networking to spread the vegan gospel, too. I’m a fan of using any and all outlets we can to speak up for animals, but what I think is important to point out here is that these folks used that as part of a multi-pronged approach — and didn’t rely solely on their “armchair activism” to create change. Here were some of their success stories:
Danielle said:

Also, honestly, another best part was when a friend I met years ago contacted me late last night. She sent a message saying that, because of all my Facebook posts, she watched Blackfish. She said she held her little daughter close when they talked about the mother whale crying for her baby. AND she said that even though they were planning on going to SeaWorld this year, after watching Blackfish, she and her husband decided to get another year pass for Disney parks instead!

Liz had a similar success story, brought to you by the power of social media:

My runner-up would be the people coming out of the woodwork on Facebook (old friends, people who are barely friends) telling me they are going vegan and asking for help and advice. That has been pretty awesome, and I’ve made some great new (old) friends. Our Facebook posts have more of an impact than we think. People shouldn’t get “down” if something we post doesn’t get the “likes” we think it should. More people are paying attention than we realize.

With all of this in mind — and since I’m feeling all empowered now — I’d love to hear from you about your best personal activism moment of 2013! Comment below and let us know!
And since ’tis the season, I’m going to choose one random commenter and offer you a copy of the (really incredible) documentary, Maximum Tolerated Dose (talk about tools to change the world!). You have one week to enter — so you have until Friday, December 27 at Midnight EST. At that time, we’ll select a random winner and send you your DVD.
I’m eagerly awaiting your comments.
Thank you for being part of the flock, and for inspiring me and the rest of the OHH team on a daily basis!
xo jasmin

Episode 206: “To know even one life has breathed easier because you have lived, this is to have succeeded.”