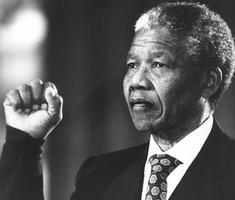 Dear Flock,
This is our favorite Nelson Mandela quote: “It always seems impossible until it’s done.”
It certainly must have seemed impossible. #PRIVATE# Not very long ago, South Africa was a pariah state. Apartheid was firmly entrenched, no one was giving an inch, and there did not seem to be any way out other than a bloodbath. It was impossible to imagine then that a peaceful resolution would be found. Well, impossible for most people. But not for Mandela. With far more reason for bitterness than anyone, he found his way to peace.
It seems impossible now for us to imagine a world without animal exploitation. We may talk about it, but when you look around, think about the rapidly growing human population, the exponential growth of the meat industry in China and India, and the widespread willingness to completely ignore the suffering of animals, hope is hard to find.
When reality starts to seep in, hope can disappear. That’s why we need to do everything we can to channel Mandela’s courage in the face of seemingly impossible odds. Because, like him, we have right on our side. And, fundamentally, people know we’re right. And we have the vision of a world that is so much better, in every conceivable way, than our present world.
We are so happy to be in this with you.
xo jasmin & mariann

OHH Bonus Content: Ingrid Newkirk On Why Bushes Are the Internet for...

Flock Only: Another “Defiant Daughters” Giveaway Just for You, Plus Updates