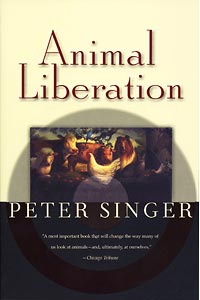 Liz Dee here. Did you catch my interview with activist extraordinaire Janelle Elizabeth Soto? Janelle is currently hard at work planning the opening of New Jersey’s first vegan diner, The Killer Vegan Diner and Delicatessen. #PRIVATE#As an out-and-proud Jersey girl, I personally cannot wait. In the meantime, I’ve been busy attending Janelle’s popular Sunday vegan brunches, which she hosts at Lalibela Ethiopian Restaurant in South Orange, as a precursor to the forthcoming restaurant.

But I’m not just a fan of Janelle’s scrumptious grub. As I’ve learned more about her longtime activism, I’ve become mildly infatuated with her unique and rich activism history. An outspoken vegan of 18 years, this woman has seen (and done) it all, using her skills, talents, and voice to speak up for animals in a plethora of ways. We can all learn a thing or three from her. And so I was elated when Janelle agreed to let the flock in on some of the books that have helped shape her evolving advocacy. Below you’ll find Janelle’s Top 5 Animal Rights Books. I, for one, have a trip to my local bookstore planned for later this afternoon. Just like Janelle’s food, when it comes to her book suggestions, I can’t wait to dig in.

Oh, and as a bonus, we’re offering one lucky flock member a copy of Peter Singer’s Animal Liberation. To enter to win, email contest [at] ourhenhouse [dot] org. Include your mailing address, and specify that you’d like to be entered to win Animal Liberation. You can only enter to win one time, and the contest is only open to flock members. You have one week to enter, which means you have until Thursday, May 30, at midnight EDT. We’ll randomly select a winner on May 31. Good luck!