Dear Flock,
Today, I’m excited to share with you a recipe by John Schlimm, author of The Cheesy Vegan (Da Capo Lifelong, a member of the Perseus Books Group, 2013). John is giving you (and just you, darling flock) a sneak peek at his Tomato Gratin with Cheddar Crumbs & Basil Chiffonade, which is featured in The Cheesy Vegan.
#PRIVATE#John’s story is really incredible. As he described today in our Thought for Food column, he is the son of a butcher, and as a kid, he “tried out each of the jobs in Dad’s meat-processing operation – skinning, cutting, wrapping, making sausage, and even tanning the hides.” So how did John go from that, to becoming an acclaimed vegan cookbook author? You’ll have to read his article to find out. But I will say — between that story and Jim Mason’s recent OHH feature, “In Recovery From Farming,” in which he described the journey from growing up a “family farm,” to becoming one of the greatest thinkers in the animal rights movement (those are my words, not his — Jim is way more humble than that, though he shouldn’t be) — I cannot deny that I feel hopeful. People can change, even the most unlikely among us.
We each have stories like these. Perhaps they are not quite as dramatic as John’s or Jim’s, but we all know somebody who we once said would never take steps toward veganism, and yet these people have proven us wrong. For me, most recently, it was our accountant and his partner. Our accountant is your typical “meat and potatoes” fella, and has said to us more than a few times that he just could not give up cheese (or meat, or eggs — depended on the day). Then one day, he was walking through a restaurant in the West Village, and the word “vegan” caught his eye. Turns out it was Blossom, one of NYC’s mainstay vegan hotspots. Our accountant, who had been trying to plan a double date with us, naturally thought that this would be the perfect spot. He was right. We explained what seitan was, what tempeh was. We ordered a ton of appetizers for him to sample. It was clear to us as we sat there with him that this was the first foray he’d ever had into remarkable vegan cuisine (though we’d been gently nudging him in that direction for years). Recently, his partner contacted us asking for our suggestions for replacements for ground beef, in a lasagna recipe. They had been experimenting with more and more vegan cooking and baking. Somehow, slowly but surely, veganism did what it’s known for — it inexplicably worked its way in. Even with our accountant, who — just a few months ago — told us that he could never even wrap his head around Meatless Mondays.
This is not an usual story. You have your own story like this — of your accountant, or your neighbor, or your wife, or your mom. Humans are an intensely social species. Real change happens person to person. So keep advocating, chickens! It is working, even though sometimes it may feel like it’s not. Think of these stories. Remember the people you have influenced, sometimes simply through leading by example. And, of course, also remember that there are countless people who have been influenced by your veganism, that you might not even know about. Cling on to that; it’s there when you need it.
Oh! Before you go! On John’s column today, we announced a giveaway of John’s newest books — The Cheesy Vegan (Da Capo Press/Lifelong Books) and Stand Up! 75 Young Activists Who Rock the World and How You Can, Too (Publishing Syndicate LLC). Do enter that! But thanks to John’s publishers, we are able to offer you — our darling flock — an additional giveaway of each book! If you’d like your chance to win, email contest [at] ourhenhouse [dot] org, and put in the title of the email, “flock giveaway of John Schlimm’s books.” Be sure to include your full mailing address in the email. You have until midnight EDT on Monday, September 30 to enter. On October 1, we will randomly select two flock members — one book for each lucky chicken.
Oh, and if you try John’s gratin (below), report back! I’m dying to make this. (Actually, more than that, I’m dying to eat it. So, if you’re nearby …)
xo jasmin
*** 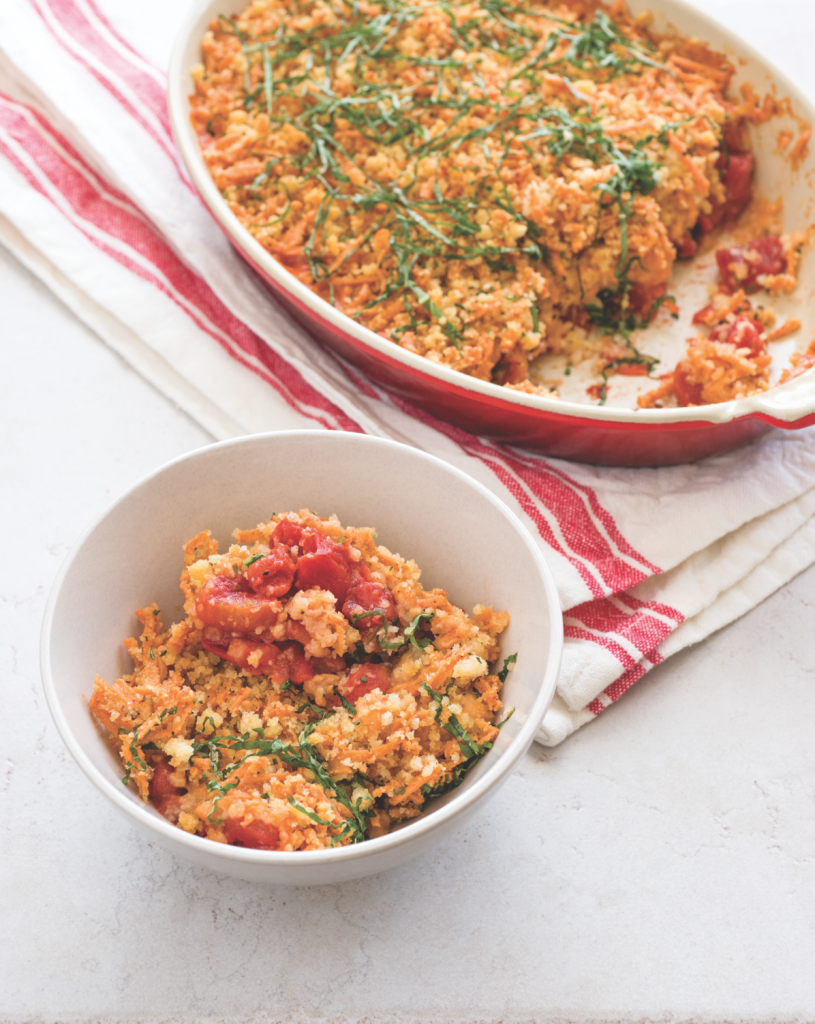 [print_this] Tomato Gratin with Cheddar Crumbs & Basil Chiffonade
From the book The Cheesy Vegan by John Schlimm. Excerpted by arrangement with Da Capo Lifelong, a member of the Perseus Books Group. Copyright (c) 2013. www.dacapopresscookbooks.com
A convenient year-round baked tomato dish, this could also be served as a side dish at dinner or as a lunch entrée.
Ingredients:
1 (28-ounce) can diced tomatoes, such as Muir Glen, well-drained
4 cloves garlic, minced in mini-processor
3 Tablespoons chopped fresh chives or minced green onions (use a mini-processor)
2 Tablespoons dry Marsala or Madeira salt, and freshly ground black pepper
1 Cup fresh vegan bread crumbs, preferably French
2 Tablespoons Panko (optional)
1 ½ Cups grated vegan cheddar cheese (see his recipe featured on OHH’s Thought for Food column)
2 Tablespoons extra-virgin olive oil
12 basil leaves, cut chiffonade style
Instructions:
Preheat the oven to 350°F. In a large bowl, mix the tomatoes, garlic, 2 ½ tablespoons of the chives, and Marsala. Season with salt and pepper, and transfer to a 1 ½-quart gratin or baking dish. In another large bowl, mix the bread crumbs, panko (if using), Cheddar cheese, and olive oil well. Season with salt and pepper, and sprinkle the mixture over the tomatoes.
Bake until the juices bubble and the topping is golden brown, about 40 minutes. Let stand 10 minutes. Sprinkle with remaining chives and the basil chiffonade, and serve.
Yields: 2 ample servings [/print_this]
Share 0 FacebookTwitterPinterestEmail
previous post