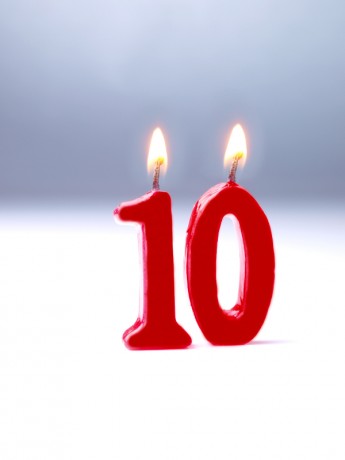 Dear Flock,
It’s halfway through my 10-year veganversary month, and I’ve been thinking of how much the animal rights movement has changed since I joined it as a tadpole activist back in 2004. I was in my mid-twenties then, and had long been involved with AIDS-awareness activism, so the idea of speaking up for the maligned was not a new concept to me. But taking all animal products off the plate (I was a longtime vegetarian already), and adding animal issues to my life’s mission — in fact, centering my life’s work around changing the world for animals — threw me for a loop to some extent, at least initially. Like many (maybe all) of you reading this, when I learned about factory farming — particularly the horrors of the dairy and egg industries — I was furious, and kept saying to myself, “How could I not have known?!” I realized then that I — that each of us — had been betrayed by the food system in ways that seemed criminal (and, in fact, should be). So I went vegan, and jumped into activism. After I got over my initial fury (not that I’ll ever get over it entirely), all I felt was motivated. #PRIVATE#
Over the next few weeks, I went down to PETA to volunteer. Then, throughout the following months, I got a job with the animal rights group, VIVA USA. Soon, I wrote an article on gay rights and animal rights for Satya Magazine, and then started writing freelance for VegNews. Eventually, I wound up working at Farm Sanctuary — wearing many hats, but at some point landing as their campaigns manager — and in 2010, I left to start Our Hen House with my smarter, classier half, Mariann.
Now, Our Hen House has grown as quickly and maniacally as the wild and beautiful perennials in our Brooklyn backyard. We have a new TV show; we are about to publish the 227th consecutive weekly podcast episode; we have a new e-book publishing arm, Hen Press; and I’m currently working on my first book, a memoir about food, for a division of Penguin Random House.
Prior to my animal activism, I was going to be an actress. I pounded the pavement in NYC with the rest of ’em, acting my little heart out. I got a few roles (and some great reviews!), but was always frustrated by what I saw as the self-centeredness of most artists (actors and otherwise). There are, of course, tons of exceptions to self-centered art — and on the flip side of that, when art is selfless, I think it can change the world in ways that nothing else can (which is obviously a huge focus for us here at OHH). It was also hard to get roles — I was fat, and that didn’t jive well with casting directors.
By the time I traded in acting for activism, I was craving purpose, and I wanted my life to matter more than I felt it had been. The trajectory of my life thus far felt limited, and consisted pretty much solely of writing morbid poetry and trying to get parts. It was all about me, all the time! I was, finally, tired of myself. I needed an out.
Animal activism brought me the opposite of that narrowness. In addition to seeing animal activism as a moral imperative (just as much as I saw veganism as one), I finally had a direction that brought focus to my otherwise floundering (though, admittedly, exciting) life.
It’s incredible to me to to take a step back and realize how much animal activism has given me. I don’t often think of it in those terms, because the impetus for my activism career has always been the animals — certainly not myself. I find the type of work I do to be soul-feeding, but even if it weren’t, I’d do it. (Just as vegan food is delectable, but if it tasted like paper, I’d still be vegan.) It’s a truly wonderful perk that animal advocacy can bring so much richness to our lives.
Here’s to the next 10 years! It might be an effort sometimes to maintain hope — especially when it feels like the whole world thinks we’re loopy — but if we squint our eyes a little and begin to see even the most asinine and combative incidents as opportunities for dialogue and inroads to change, I think there’s a lot to be optimistic about.
xo jasmin

Episode 227: “One must always be aware, to notice — even though the cost of noticing is to become responsible.”

Episode 260: “You may never know what results come of your actions,...