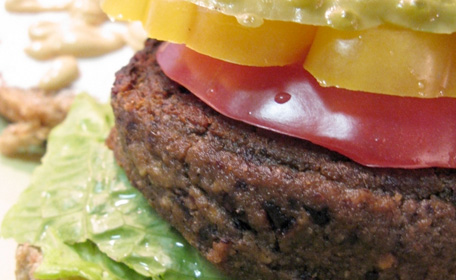 Asheville activist Stewart David has put aside his bellbottoms, Birkenstocks, and granola just long enough to have yet another influence on his local paper, Mountain Xpress. “Meatless burgers revisted: Wherein Stewart David gets through to me with humor” was written by food critic Mackensy Lunsford, whose recent escapades have included such horrors as slurping marrow out of a bone, and highlighting two chefs who joked about removing hair from pigs’ ears with a Bic razor and fire. Sounds like a real winner. 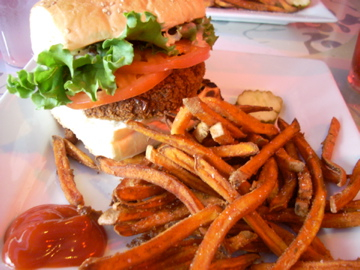 It was Lunsford’s recent comment in a review of a new vegetarian restaurant that the veggie burger is “not the usual chewy frozen puck” that prompted David — who was our very first guest on our podcast 71 weeks ago — to send an email setting Lunsford straight. However, based on the way the article begins, I have no doubt that Lunsford and David are regular old pen pals: “Another e-mail from Stewart David, one of Asheville’s most vocal vegetarians, popped up in my inbox last week. What, I wondered, had I done to disturb the meat-eschewing contingent of Asheville diners this time?”

The article then quotes David’s letter, which is understandably defensive of veggie burgers.

“Times have changed, and I’m guessing that you haven’t sampled some of the great veggie burgers around town. As vegetarianism has moved from the margins to the mainstream, the quality of the food has soared. VegHeads joins Firestorm, Laughing Seed, Green Light and Rosetta’s to become the fifth vegetarian restaurant in town. Most of these places offer veggie burgers, and the ones I’ve sampled have nothing in common with a “chewy frozen puck.” Veggie burgers are turning up more and more at mainstream restaurants, and they are some of the best in town. The Corner Kitchen serves up a delicious homemade black-bean burger, 131 Main uses beets in their awesome veggie burgers (the red coloring is scary at first to those of us who abstain from flesh) and the hemp-nut burger at Jack of the Wood is a favorite of mine. And the list goes on. I suppose that when you dine out, a veggie burger is probably not a choice you would normally make, but please give one a try sometime. The Asheville vegetarian community would greatly appreciate it if, in your role as a food critic, you stop perpetuating the old stereotypes regarding vegetarian foods.”

And the humor that prompted Lunsford to write the piece in the first place? Here’s how David closes:

“Gotta go, it’s time to put on my bellbottoms, Birkenstocks and tie-dyed T-shirt, smoke a joint, put on a Rolling Stones album and eat some granola [smiley face].”

Is it inappropriate for me to confess my love for Stewart David right here in this blog entry? Because I love him. He not only spoke up for veganism, putting this influential journalist on the right path, but he used the most powerful tool possible: the funny bone. It just goes to show you that a little wit never hurt anyone.

And here’s icing on the cruelty-free cake: Inspired by David’s assertion that vegan food is killer (without the killing, that is), the rest of Lunsford’s article is a (very positive) review of veggie burgers, and other vegan fare, in the Asheville area — not only at vegetarian restaurants, but also at meat-centric restaurants that offer vegetarian food.

Stewart David is truly an example for all of us of the power of media outreach, particularly when partnered with a touch of tongue-in-cheek attitude.

Photo at top of blog: Taken by SaraJane (“VeganHeathen”) from VeganChicksRock and used with permission from veganstockphoto.com.