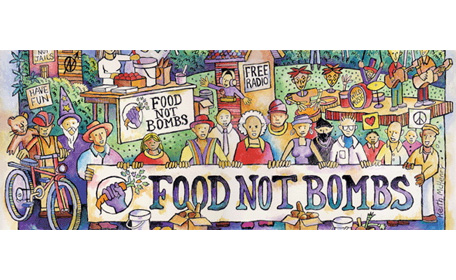 It’s sadly ironic when food drives bring in animal products, particularly when — as hundreds of millions of people go hungry each year — much of the world’s harvest is fed to animals instead of people. Inefficiency at its finest.

Starting a Food Not Bombs chapter in your community (if there is not one there already with which you can get involved) is a tremendous way of making a difference for animals — both the human and non-human varieties. They walk you through seven steps on how to do just that , including everything from getting fellow volunteers, to securing food donations, to delivering the bulk foods to shelters and soup kitchens.

If you’re not ready to start a chapter, you can still participate in your community’s food drive, or donate to any food bank in your area — with your favorite canned vegan grub. Or perhaps you can organize a vegan night at your town’s homeless shelter.

And don’t forget to call your newspapers, making very clear the connections between hunger and animal production, as well as the political reasons that you extend non-violence to animals and people (which Food Not Bombs puts very eloquently). The press would just eat that up.