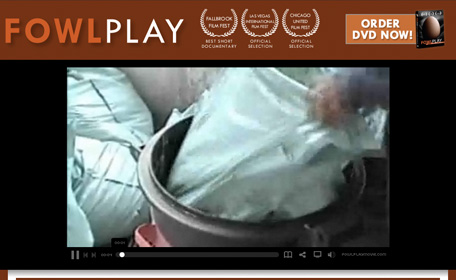 An animal rights film chosen as an official selection at a major film festival? Yup. And the festival likes the film so much that they decided to put it on the cover of their promo posters and program? Yup yup!

The film: Fowl Play, a Mercy for Animals documentary about the egg industry. The festival: New York International Film Festival. The implication: A big one. If the screening is successful, there is a chance that a film distributor will pick it up for international sales and rentals.

Here is where the power of grassroots comes in: This more of us that show up for this screening, the more likely it will be a success at the festival. If you’re in NYC, make your way toward City Cinemas Village East on Sunday, July 25 at 6 p.m. (Get your tickets here or get them directly through Mercy for Animals by emailing Matt at mattr@mercyforanimals.org.) If your’e not in NYC, please help spread the word about the screening and the film. If you need more impetus for why you need to see Fowl Play, watch the trailer below.