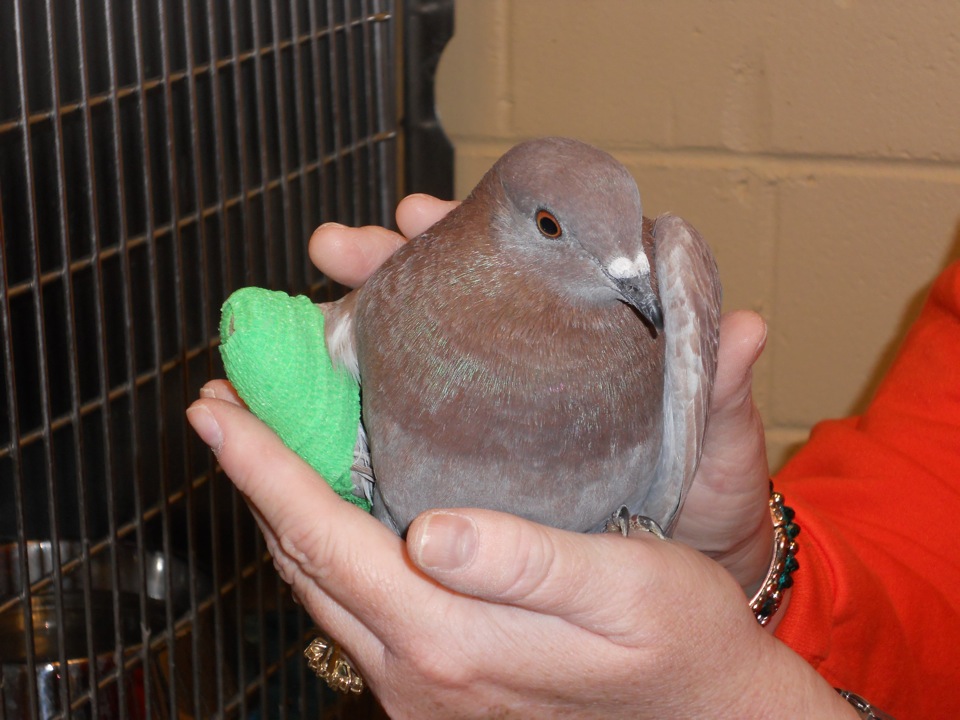 Today, OHH’s editor extraordinaire, Cassandra Greenwald (the one who decided she didn’t have to be a veterinarian to help animals), shares a remarkably moving and fascinating look into the work of Steve Hindi, and SHARK. For those of you who are flock members, also be sure to check out more of Cassandra’s insights into Hindi’s work in her flock-only piece, “Not an Armchair Activist: How Steve Hindi’s Tenacity Became My Inspiration.” (If you’re not a flock member yet, join today!) 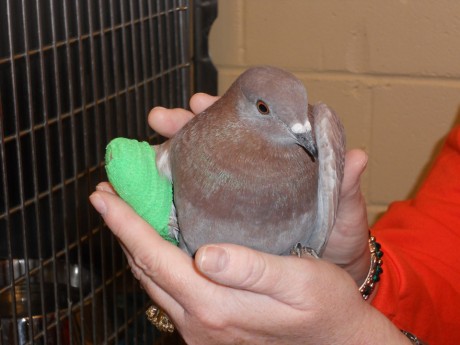 A glorious pigeon — rescued because of SHARK’s efforts.

Steve Hindi is not an easy man to track down. Just a few hours before I was scheduled to talk to him about Showing Animals Respect and Kindness (SHARK), the animal advocacy organization he runs, some big developments went down. You might say they came crashing down – literally, in fact – at the live pigeon shoot in Berks County, Pa., that SHARK was protesting. SHARK uses remote-controlled drones to fly above the area to take photographs and videos of this terrible “sport,” and someone intentionally used a rifle to stop the drone – and stop SHARK – from doing its work.

The people of SHARK are no strangers to these kinds of direct acts against them. In the short time that I spoke with Hindi over the phone, while he was on his way home from that protest, this became obvious. I shed a heaping helping of my own naiveté that evening. My first question, after checking to make sure that everyone was OK, was if he thought this was an intentional act. Silly me for thinking it could be an accident. Hindi said it was absolutely intentional, and, if you can imagine for a minute that drones can have wounds to rub salt into, he said this is the second time the hunters and sportsmen of Pennsylvania have shot down a SHARK drone.

Was I suddenly in an action movie? Did the opening credits just segue into the crescendo-filled first scene? It turns out that showing animals respect and kindness means that Hindi and his team have to put up with some violence and corruption from humans along the way. Maybe I shouldn’t be so surprised.

It was rather fitting that I was talking to Hindi after a protest at a Pennsylvania pigeon shoot, because the pigeon shoots were what started it all for him. Hindi, like most of us, did not spring from the womb as an animal activist. In fact, he used to be a hunter. He started fishing when he was four or five while growing up in Minnesota and Illinois (“They don’t call them the Great Lakes for nothing,” he said) and continued to up the ante until he was fishing for sharks as an adult. On his trips to Long Island twice a year to take his tiny boat out into the open waters, he passed through Pennsylvania. Sometime around 1989, he read a book by Don Barnes (director of the National Anti-Vivisection Society) that laid out the horrific details of what goes on at a pigeon shoot. “I had to see if for myself,” Hindi said, “Because what he described was so terrible that I either had see it with my own eyes to believe it, or disprove it if it wasn’t the truth.” 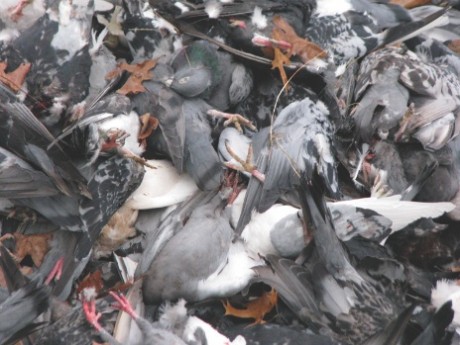 He said the pigeon shoots were worse than the book, and the book had gut-wrenching, graphic descriptions. It’s one thing to read the words, but it’s another thing to see young kids throwing birds out of boxes, waiting for hunters to take aim with their shotguns and shoot them. To see those kids pick up the birds, bash their heads in, stomp on them. Because – here’s something else I learned – these hunters don’t always kill the pigeons with one shot. Nope. The poor birds are hurt and gathered up and sometimes even tossed into the surrounding woods, where they are left to die. Birds who were previously fed and watered and cared for (if you can call it that) before the day of the shoot, just discarded like trash.

It was this wastefulness, this total disregard for any hunter “conservationism” or principles that say to only kill what you eat, that stayed with him as he went to hunt for sharks after that first pigeon shoot. Shark fishing, which used to thrill and excite him, began to bother him, and he was confused by this feeling. “I was no stranger to killing,” he said. “So why did I feel so bad?”

The transformation from hunter to activist certainly wasn’t an immediate process for him, but witnessing the pigeon shoot and experiencing its lasting effects did sink in – so did the words of the animal rights activist who asked Hindi, “Would you still kill fish if fish had vocal chords?”

I keep thinking about this now, not only the question, which is indeed haunting, but also the idea that part of being an activist is to find the conversation that will speak the most to the people you’re with. Doing outreach, literally reaching out to people to bring them the message of animal rights, isn’t about spewing statistics and then judging people who don’t immediately change. You have to lay down a framework, a thoughtful seed or two, and let go a little. Because that animal activist who asked Hindi about fish and vocal chords probably thought of Hindi as the least likely person to join the cause of animal rights. But sometimes, the people you least expect can become your strongest allies.

On a drive home from shark fishing, Hindi decided he was done. He donated his boat to the Sea Shepherd Conservation Society and started getting involved with animal rights, but he was still finding his niche. “I didn’t like protests,” he said. “I’d be standing there, and some guy would say something that would just make me want to spit on him.”

Hindi has decided to let the camera do the job (I, too, am certainly a believer in the power of video). He and SHARK have been perfecting aerial photography – he said the Department of Defense could probably learn a thing or two from SHARK’s drones. These days, Hindi concentrates on bringing video documentation of animal abuse to the world at large. Because, as he learned from Don Barnes, you can read about it, but nothing can capture the visceral, tangible feeling of seeing animal abuse with your own eyes, and if witnessing the violence can change a fish killer, is there any doubt about who else can be changed?

I asked Hindi how he deals with all this – the attacks on his organization, the pigeon shoots themselves, the rodeos and horse slaughter and other terrible acts of animal cruelty that SHARK documents on video. He said, “Things can get better. You just have to try.” At the end of the day, it’s the accomplishments that keep him going. The experience of stopping pigeon shoots in Illinois, for example, helped all of those who are involved with SHARK believe that they can succeed again. “You’ve got to be willing and determined,” Hindi offered. “I tried to take a vacation once so I wouldn’t burn out, but I went crazy. I couldn’t just sit there and not be doing something.”

Are you a flock member? If so, be sure to check out more of Cassandra’s insights into Hindi’s work in her flock-only piece, “Not an Armchair Activist: How Steve Hindi’s Tenacity Became My Inspiration.” If you’re not a flock member yet, please consider joining! We offer some fabulous thank you gifts for joining, and you also get access to exclusive content, giveaways, contests, discount codes to vegan stores, and much more! 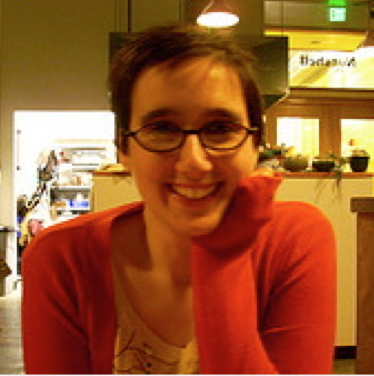