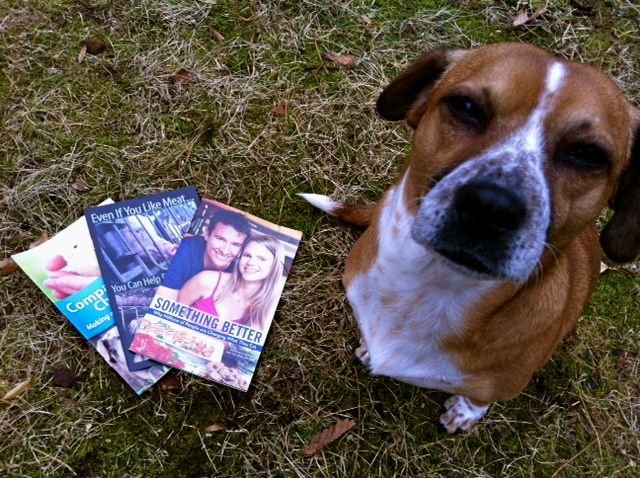 OHH readers last met our Publications Coordinator, Liz Dee, when she told us all about Vaute Couture’s vegan fashion show at the New York Fashion Week. She also recently joined us on our podcast — Episode 164 — where she shared her unusual and fabulous tale of how her candy company inspired her to go vegan. We’re excited to once again welcome back Liz Dee, this time to share her thoughts about a perfect activity for late winter/early spring — leafleting!

The timing for this couldn’t be better. Farm Sanctuary’s “Compassionate Communities” campaign recently teamed up with The Humane League in order to conduct a study measuring the true impact of leafleting on college campuses. What they found was astounding:

About 1 out of every 50 students who received a leaflet indicated they became vegetarian or pescatarian as a result. Just as importantly, 7% of students (1 in 14) said they now eat “a lot less” chicken, a lot fewer eggs, and a lot less dairy as a result of getting the leaflet. 6% eat a lot less fish, and 12% eat a lot less red meat. Furthermore, about 1 in 5 students said they shared the leaflet with someone else who then began to eat less meat. What does all this mean for animals? After accounting for social desirability bias (people over reporting changes in their diet), the results suggest that for every 100 leaflets you distribute on a college campus, you’ll spare, by a conservative calculation, a minimum of 50 animals a year a lifetime of misery. That’s one animal spared for every two leaflets you distribute!

Bearing that in mind, but factoring in normal human tendencies to feel self-conscious, shy, or hesitant when putting oneself out there and handing out leaflets to strangers, Liz decided that in order to hold herself accountable and finally become what she’s always dreamed of — a leafleting machine — she’d document her journey from slacktivist to activist. In this article, she explains how she got over her fear of flyering.