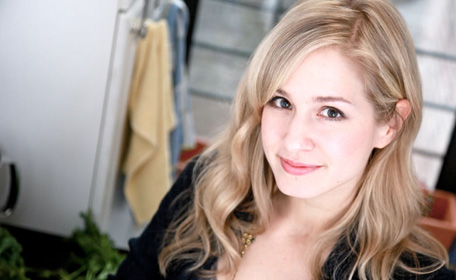 There have been more than a handful of vegan-friendly films to hit the big (and small) screens recently. Advocating on the health side of veganism, there’s the wildly popular Forks Over Knives, the less known about but very charming Chow Down, and two films that follow people’s stories of health recovery through plant food – May I Be Frank, and (one of our favorites) Fat Sick and Nearly Dead (don’t miss our interview with the filmmaker, Joe Cross). Speaking to the ethics angle, there was the incredibly moving feature length fiction film, Bold Native (our video interview with filmmakers Casey Suchan and Denis Henry Hennelly is also not to be missed), and the award winning short film by Mercy for Animals, Fowl Play. And making the environmental argument, there was PLANEAT. This emergence of films covering what animal advocates have been talking about for years is refreshing, and also about time. Just a few years ago, we had only a very small handful of films advocating our message. Given the unearthly power of the moving image to change hearts and minds, the fact that filmmakers have caught on to the vegan and animal rights message will ultimately result in hundreds of thousands (or more) of new advocates who prefer seitan to steak. 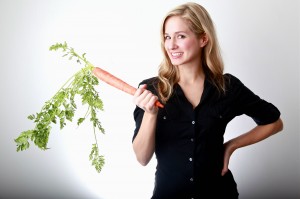 Perhaps you’ve already heard the buzz about the newest film to join this compassionate hive of cinematic advocacy, the aptly named Vegucated, by longtime activist powerhouse Marisa Miller Wolfson. And if you were lucky enough to attend Vegetarian Summerfest a couple of weeks ago, then perhaps you were one of the hundred and thirty lucky attendees who caught the premiere. (Not surprisingly, the end credits were accompanied by an electric standing ovation that could rival some of those received by Maria Callas when she sang at La Scala.)

Vegucated is clearly going to become an important part of so many people’s activism. Because, finally, we animal advocates have a movie to show off that is funny, entertaining, informative, and, crucially, covers all three issues, i.e., health, the environment, and, of course, the animals. Vegucated is your one-stop-shop for vegan advocacy. It not only packs a punch, but it manages to pack a few laughs at the same time. This is undoubtedly due to Marisa’s own background as a comedic actress – the woman knows how to tell a story.

Before we continue, we should tell you, in the interest of full disclosure, that we have been friends with Marisa for years. And, in fact, Jasmin proudly served as a creative consultant to the film and even has a small part in it. And Mariann has screened parts of it in her animal law classes. So we are hardly new to this movie, and we really can’t claim to be neutral parties. But, do you really think we would lie to you? 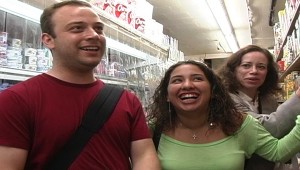 The premise of the movie is simple. Marisa finds three willing meat-and-cheese-lovers on Craigslist who agree, solely for the sake of adventure (and perhaps to lose a few pounds and see their names in lights), to go vegan for one month and let her document the process. Brian is a “bacon-loving bachelor” who prefers eating out to cooking. Ellen is an aspiring stand-up comedian and also the single mom of two kids who need to be fed on a very regular basis. Tesla is a college student who has absolutely no interest in eating vegetables.

Along with these vegan neophytes, we — the viewers — are introduced to the enormous variety of foods that vegans eat, and we also find out about some of the challenges of being vegan in a largely non-vegan world. Gradually, the subjects’ education is taken deeper and deeper into the issues, and we are brought along for the vegucation: Dr. Joel Fuhrman enlightens Brian, Ellen, and Tesla to some of the health benefits of a plant-based diet (and also takes their vitals so that he can have something to compare the outcome results to). Then, on a visit to Vegetarian Summerfest in Pennyslvania, the three hear a moving talk by Howard Lyman about the environmental devastation of factory farming. Also at Summerfest, the health issues are delved into in more detail by none other than T. Colin Campbell (author of The China Study). 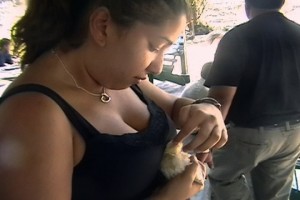 Tesla and a rescued chick

But it is later on during that life-changing trip to rural Pennsylvania, when the trio visits a egg farm, trespasses on the outskirts of a pig factory, tours an abandoned slaughterhouse, and, finally, visits a farmed animal sanctuary, that the most powerful moments of the film emerge. These temporary vegans, when confronted by the reality of how animals live and die — and accompanied by two chickens rescued from the egg factory — are clearly moved in ways that they never expected, and have difficulty handling. The emotion is palpable.

In addition to the compelling personal stories of the three protagonists, the movie, ably narrated by Marisa herself, uses undercover footage and animation to convey an enormous amount of disgusting information about our food system in a thoroughly digestible way.

We truly believe that this movie has the ability to reach people in a unique way that no other film has accomplished. There is simply nothing more exciting for us at Our Hen House than to find a new, powerful tool to spread our message. We are beyond elated that Vegucated has arrived.

Bonus! Don’t miss our podcast this weekend, when filmmaker Marisa Miller Wolfson will give us an exclusive inside glimpse into the process of making Vegucated. And if you want to support this groundbreaking movie, you can do so by throwing a few well-earned bucks to the Kickstarter campaign. To stay on top of Vegucated and to find out about upcoming screenings, frequent the website, www.getvegucated.com, and also “like” it on Facebook. Also see the Vegucated trailer below.